All the paperwork is in order and construction has begun on a $1.3 million project that will triple the seating capacity of the worship space, install a wheelchair ramp and bring the bathrooms up to code.

The little church built by Italian immigrants nearly half a century ago attracts more people for Sunday worship than it can accommodate. Every weekend parish staff has to set up folding chairs and open the temporary walls to the gym to make sure that everyone who comes for the Eucharist could be welcomed.

The parish joyously welcomes all, but the influx of worshipers has created a problem – a happy problem, but a problem nonetheless.

“You are at Mass and you have a basketball hoop in front of you,” said Msgr. David Cassato, administrator, describing the conditions parishioners face.

“These people deserve a decent place of worship,” he said.

The church welcomes more than 700 worshipers every weekend, but has a comfortable seating capacity for only 100. Masses are celebrated in Spanish, Italian and English. The parish has a full-time priest, Father Martin Restrepo, who speaks both Spanish and Italian. The religious education program has an enrollment of 300.

The parish never had a school to its name but created community space. There is a gymnasium and meeting space for the welfare of the parishioners. The Spanish community uses the space to celebrate feast days. It is also where the Bensonhurst Youth Cluster, an active group working with the area’s Catholic churches, holds many of its meetings.

Now that construction is underway, the Spanish community also celebrates Mass in the gymnasium because the temporary walls had to be blocked. 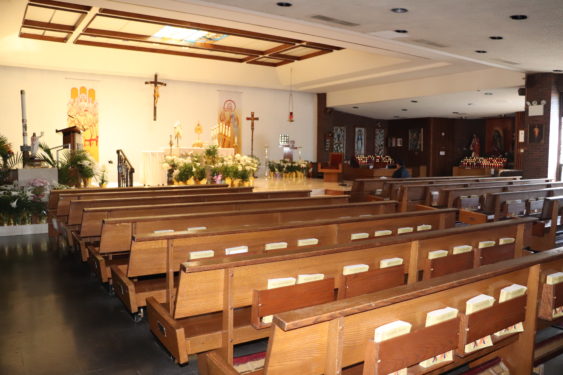 The project is scheduled to be completed by October and Msgr. Cassato is confident that the timeline will not be altered. He said securing all the proper city permits and paperwork took more than a year, but now that all the i’s have been dotted and the t’s have been crossed, he does not foresee anything prolonging the project. The parish must now work on paying for the work.

The parish has stable finances and operates in the black; however, it does not have nearly enough money saved to cover the cost of the project. The project is underway thanks to a loan from the diocese.

When Msgr. Cassato was assigned administrator of the parish three years ago, one of the first things he did was go to Bishop Nicholas DiMarzio and ask permission to expand the church and for a loan to cover the cost. Msgr. Cassato said he gave the bishop his word that the loan would be repaid; in turn, the bishop promised his support.

The plight of St. Dominic has been on bishop’s radar since the first year he became Bishop of Brooklyn.

Msgr. Cassato distinctly remembers Bishop DiMarzio standing on the street in front of St. Dominic’s Church with his miter. Msgr. Cassato was by his side for one of the Italian processions in the neighborhood. He said he remembers the bishop telling him then that something must be done to make the church building better for parishioners. This was long before Msgr. Cassato was assigned to the parish.

Therefore when Msgr. Cassato came with his plea, the bishop was receptive. He assured Msgr. Cassato of his support and even said he would come to the parish to rally parishioners.

Now it is up to the parishioners. The loan has been secured and some of it will be covered by the Generations of Faith campaign, but the rest must still be repaid. Msgr. Cassato said he has faith that donors will be found and parishioners will give their full support. He believes in the parish and believes the construction project will not only revitalize the physical space but the people as well. He has already seen an uptick in daily attendance since workers have started the construction. Msgr. Cassato said their presence is a physical manifestation that the parish is strong and growing, encouraging people to take root.

One thought on “Expansion at St. Dominic’s Makes Room for Everyone”