Long lines of teenagers wrapped around the walls along every corner inside Carnesecca Arena April 21. Were the youth entranced by the loud music coming from the live band playing drums and keyboards? Or was it the huge colorful LED video screens displaying lyrics that illuminated the city’s third-largest indoor sports arena into an enchanting disco floor with sprays of purple and blue hues?

The answer was simple: rows of teens were standing in line to meet Christ, in persona Christi, through the sacrament of Reconciliation at Brooklyn Catholic Youth Day (BCYD).

“I love God,” said first-time attendee Amanda Channer, an eighth grader from St. Laurence, East New York, who was one of the last teens patiently waiting to see a priest, “and I wanted to appreciate that and share my faith and be proud of who I am, be proud that I’m Catholic.”

More than 2,000 middle school and high school students from nearly 60 parishes across the diocese spent their Saturday at St. John’s University for Brooklyn Catholic Youth Day. Part day-retreat, part praise and worship concert, the full-day schedule was coordinated by the diocesan School of Evangelization.

“It is very important that young Catholics see other young Catholics celebrating their faith joyfully,” said diocesan youth and young adult faith formation director Paul Morisi. “Events like these work to help build the body of Christ here in Brooklyn.”

BCYD’s 2018 theme was inspired by Bishop Nicholas DiMarzio’s weekly column in The Tablet with the same title of “Put Out Into The Deep.” Morisi added that the theme was chosen in hopes that the young Church will form a deeper relationship with Jesus so that they can help build a stronger Church.

In order to foster that relationship with Jesus, the groups participated in morning Mass celebrated by Auxiliary Bishop James Massa. A stage on the gym floor became the altar and at that moment transformed the famous basketball gymnasium into a church.

Concelebrating were diocesan vocations director Father Sean Suckiel, and Jornada spiritual director, Father James Kuroly. Assisting at the altar were transitional Deacons Jose Diaz, Joseph Dutan and Hung Xuan Cao – not to mention 10 priests from around the diocese sitting in the front row accompanying their parish youth groups during the annual event.

Deacon Diaz, who is preparing for ordination to the priesthood in June, spoke about his vocational story during the homily. His testimony about his family upbringing in a Dominican household resonated with many of the youth from St. Sebastian Church.

“They love Deacon Jose Diaz,” said youth minister Christina Peñaloza who came with 200 from the Woodside parish, including chaperones and parochial vicar Father Rodnev Lapommeray. “They love him and he was on fire and they related to his stories about his Spanish mom. So to hear such a conversion story from him was really inspiring by them. They loved it.”

After Mass, Bishop Massa set aside an opportunity for the crowds to pray for the future priests of the diocese. With thousands of arms outstretched toward the altar, special blessings were bestowed upon Deacons Diaz, Dutan and Cao as they knelt in front of the stage.

For another first-time attendee from St. Laurence, participating in the Eucharist was an experience he won’t forget.

“It was amazing,” said eighth grader Justin Caver. “I got to experience Mass here and celebrate it with parishes from all over. I think that we should do this again and more people should come.”

Opportunities to experience God’s presence ranged from Mass, lively music from singer Alverlis and the praise and worship band, inspiring talks from seminarians or even the charismatic testimony from keynote speaker, Dr. Ansel Augustine.

The residence campus minister at St. John’s spoke about his life after Hurricane Katrina hit his hometown of New Orleans in 2005. He encouraged young people to shine their God-given light by embracing who God calls them to be, unique and fearfully made in His image. After sharing his story of resilience, he walked into the crowd and asked those willing to be renewed in their faith to join him in the center of the floor where he was holding a cross. Crowds flooded to the center in reverence, one by one, unafraid to walk their journey with Christ that at times can seem distant, far-removed.

According to a recent study by the Center for Applied Research in the Apostolate (CARA) at Georgetown University, 74 percent of a sample population said they left the faith between the ages of 10 and 20.

St. John the Baptist’s Jeannie Ortiz recognized that the impact her youth group needed was to see just how many other teens shared their Catholic roots beyond the parish walls.

“It just confirms that there are other young people who are learning the things that they learn,” said the youth minister from the Bedford-Stuyvesant parish. “It’s important for their faith to see that they’re not alone in this journey and that there really are younger kids and other adults who support young teenagers. I think that’s why this was important.”

Sister Lucy Mendez, P.C.M., from St. Bartholomew, Elmhurst, agreed. With the help of pastor, Father Rick Beuther, members of her BCYD group consisted of more than 300 young people who came in eight buses to experience the youth day in Jamaica.

“It was important for them to experience their faith with the thousands of others because they were able to witness the fact that there are many others like them who share the same faith,” said Sister Lucy. “It gave them the opportunity to meet other young people from different parishes around the diocese and grow in their faith and even encounter God.”

Members of the diocese’s young Church also shared in a Marian prayer celebration during which teens introduced the Blessed Mother from different cultures and then together recited the Hail Mary.

Whether it was in the silent moments of Eucharistic adoration, the mercy received through confession or the ability to get off their feet to sing Christian songs, the diocesan youth spent their Saturday afternoon understanding their faith on a grander scale than what most were used to doing.

Walking toward the exit after the event, one eighth grader who attended for the first time, left with a little bit more pep in her step.

“God gave us so much so it’s only fair for me to share my faith with Him. Show Him that I praise Him and that I love Him for what He’s done for us.” 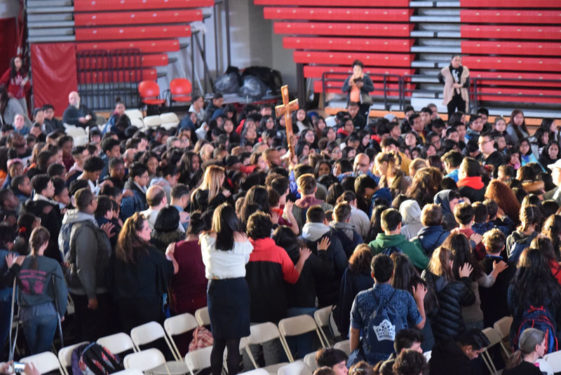