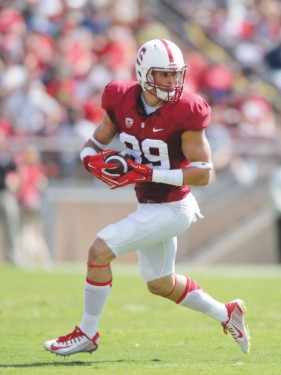 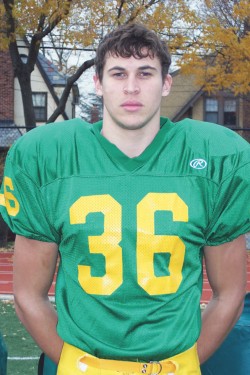 From his days playing football at Holy Cross H.S., Flushing, it was clear that Devon Cajuste had a future on the gridiron.

Standing at six-feet-four-inches and 220 pounds as a senior, he was clearly a man among boys.

And now, that young man’s dreams of a professional football career are taking shape.

Cajuste, who played his college football as a wide receiver at Stanford University, Calif., recently signed a professional contract with the San Francisco 49ers, making him one of 12 undrafted free agents signed by the NFL team.

The 2011 Holy Cross graduate is currently taking part in the team’s offseason workouts with his sights set on earning a spot on San Francisco’s 53-man roster for the 2016 NFL season.

After a strong showing at this year’s NFL Scouting Combine, Cajuste appeared to be headed for a selection in the NFL draft. He was projected to be a sixth- or seventh-round pick.

But after 253 overall picks, Cajuste’s name was never called. Once the draft ends, players are free to sign with any team, and the 49ers quickly swooped in to lock up the talented former Knight.

Used to Being Underdog

“It just adds a little chip to your shoulder, but I’m used to being an underdog,” said Cajuste, 23, on not being drafted. “I just want to do everything that I can, just like anybody else. There’s no difference between someone that’s drafted or not drafted. You’ve got to give it your all no matter what.”

Cajuste’s football prowess began as an outside linebacker for Holy Cross’ freshman team. After shifting to wide receiver, he then played three years on the varsity football team for head coach Tom Pugh. He also played basketball and ran track for the Knights.

His combination of size and speed made him a difficult matchup as a receiver for opposing CHSFL teams. During his senior season, he led the league in receiving with 47 receptions for 864 yds. and nine touchdowns and ranked third in the league with 1,139 all-purpose yds.

As he fielded several offers to play in college, Stanford was appealing, since he would be able to continue to play as a wide receiver, rather than possibly move to tight end.

A torn ACL his freshman year kept Cajuste off the field, but he began to contribute by his sophomore campaign. In his four seasons for the Cardinal, he was part of three teams that won 10 or more games.

Cajuste still has a long road to convince the 49ers that he is worthy of making the team as an undrafted free agent. However, if the work ethic he learned at Holy Cross and honed at Stanford is any indicator, he’s out to prove all doubters wrong.

“I’m hoping that with my work ethic and that extra work I put in, everything will fall into place and I’ll make the roster that way,” he said. “What will it take to get there? It takes being diligent, consistent and persistent.”

Though he’s no longer a man among boys, Cajuste is aware of what he needs to do to succeed at the next level, and it starts with looking back to his high school days.

To succeed in the NFL, he must be a “Knight” among men.