New York’s Finest gathered at Our Lady of Guadalupe Church in Dyker Heights, last weekend to commemorate the 15th anniversary of the Sept. 11 attacks, and honor officers who gave their lives that day and in the years that followed.

Families of nearly 20 New York City police officers who died on Sept. 11 or in its aftermath sat alongside uniformed and retired members of the department for the noontime Mass, celebrated by Msgr. Robert Romano, Our Lady of Guadalupe’s pastor and the NYPD’s deputy chief chaplain.

“I think our presence here today says a great deal – a great deal for all of you to know that you are supported, that your tears are our tears, your pain is our pain. But also for all of us to come together and say that we all hurt,” Msgr. Romano said.

“We might be over eight million people in the City of New York, but you know what, it’s really just a small family when you think about it.”

The New York City Police Department lost 23 members in the World Trade Center attacks, and at least 119 more members whose deaths have been officially recognized as being related to rescue and recovery efforts at Ground Zero and Staten Island’s Fresh Kills landfill. 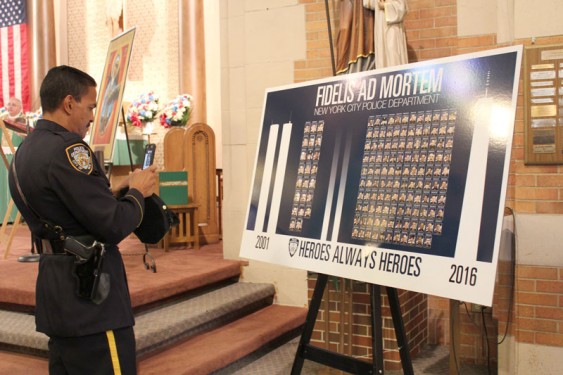 Posters on either side of the altar displayed the names and images of officers that died on Sept. 11 and in the aftermath. Miriam Rivera smiled when she saw the face of her late fiancé, NYPD Deputy Chief Steven J. Bonano.

“He was larger than life,” Rivera said. “He was the epitome of what the NYPD is. He was awesome.”

Chief Bonano was among the first responders at the World Trade Center and as a result of breathing in toxic smoke and debris at the site, he developed a rare blood cancer, to which he succumbed in January, 2015.

“Since his death, it’s been very difficult,” Rivera said, “but the support of the police department is amazing.”

Events like the memorial Mass and the luncheon that followed, she said, help to ease the heartache.

Members of the NYPD Color Guard participated in the Mass as did the children’s choir and tone chime choir from Our Lady of Guadalupe Catholic Academy.

A post-Communion video presentation interspersed images of Jesus and scenes from the World Trade Center attacks, with the faces and remains of police officers who died that day and in the line of duty since then, including Detectives Wenjian Liu and Rafael Ramos.

Liu’s family was present among the congregation as were the parents of P.O. Kenny Hansen, who lost his life in the line of duty in 1991.

Chief Thomas Burns, commanding officer of the NYPD’s employee relations section, and his 37-member staff provide ongoing assistance and support to the families of fallen officers.

“They (families that have lost loved ones on the job) form this bond that’s very strong and they support each other no matter what,” he said, “because they walked in their shoes, either months or years before.”

Connections among families are among the blessings that have come out of the Sept. 11 attacks. Other good things that have happened, especially in the last five years, Perez noted, include the opening of the Freedom Tower, the National September 11 Memorial and Museum and the 9/11 Tribute Center, where first responders recount the events of that day to visitors.

“It’s up to each and every one of us to tell the story,” Perez told the congregation, reiterating an earlier request from the monsignor to share the stories of that dark day with future generations so that it is not relegated to being just another line in a history book.

“We will always know they were heroes and we will always take care of their families that are left behind,” Perez said.

Diane Pryor-Holland of Laurelton, and her children are among those families. Her husband, P.O. Richard G. Holland, Jr., worked in the NYPD’s Transit Bureau Division, and was assigned to the recovery effort the evening of Sept. 11. He stayed on that detail until the following May.

In 2012, he was diagnosed with advanced pancreatic and kidney cancer and died just three months later.

To honor the memory of her husband and the 83 other officers whose deaths were officially recognized as being related to Sept. 11-recovery efforts at that time, Holland created three, 5-foot by 10-foot quilted panels with the officers’ images. The quilt temporarily hung in One Police Plaza and will have a permanent home in the police academy. Holland was recognized for her efforts during last Sunday’s Mass.

“The name of the piece is ‘The Ultimate Sacrifice: Post 9/11 Memorial Quilt,” Holland said. “That was my way of saluting all of them for giving their lives.”