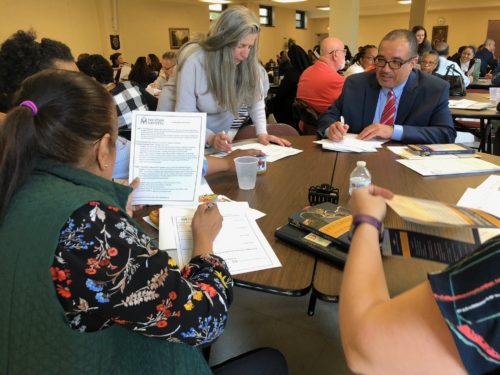 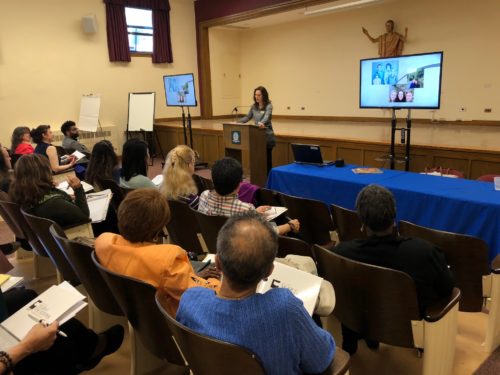 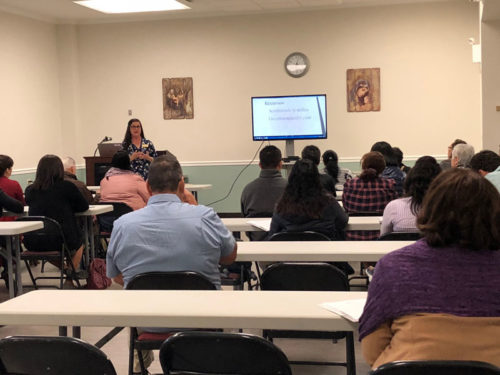 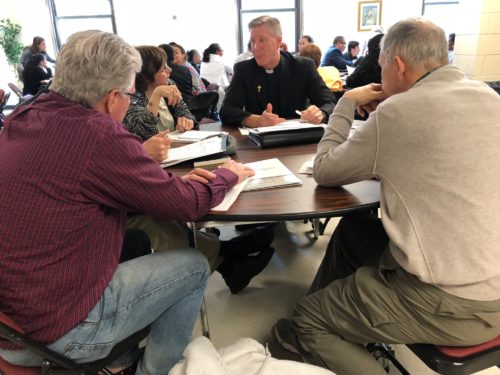 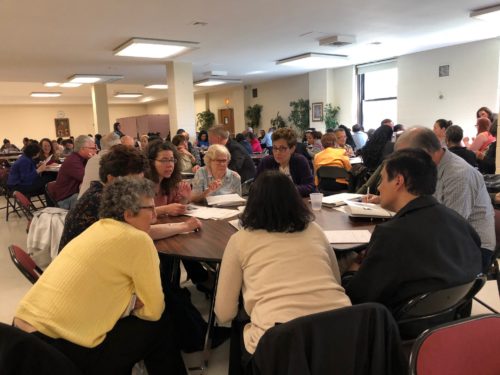 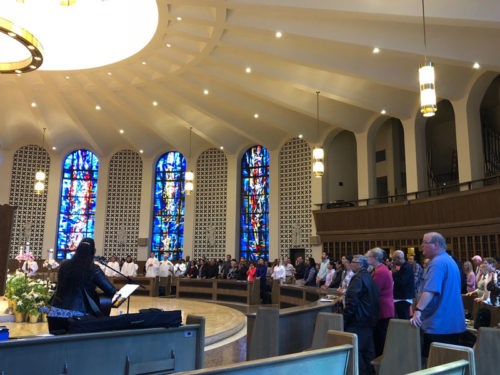 Nearly 100 members from the diocese’s different parish vocation ministries and Catholic schools were accompanied by clergy for the bilingual Hundredfold Workshop April 14 at the Immaculate Conception Center, Douglaston.

Led by Vocations Director Father Sean Suckiel, the half-day gathering focused on reinvigorating the culture of vocations at the different parishes as part of the ongoing Year of Vocations.

Auxiliary Bishop Raymond Chappetto began the day with the morning prayer. He shared his thoughts about the significance of the six-hour event.

“We’re bringing together all the vocation committees throughout the diocese to learn more about what their role is and how they are vitally important in the promotion of vocations to the priesthood and consecrated life,” said Bishop Chappetto.

The gathering occurred nearly a week before the 2018 World Day of Vocations takes place April 22 – when parishioners throughout the world will unite their prayers to listen and discern God’s will in their lives – including those called to completely consecrate their lives to God in the service of their brothers and sisters in Christ.

For Mayra Álvarez, a member of Holy Child Jesus parish, Richmond Hill, and a member of the Cofradía del Sagrado Corazón de Jesús or Ladies of the Sacred Heart, said she understands the need for priests in the world and in the Brooklyn Diocese. Her ministry is comprised of women who pray strictly for vocations.

“There’s a lack of priests that people can talk to in their own languages,” she said. “I think by promoting vocations in our communities, in our homes and our churches, we’re helping to solve that problem.”

She said it was imperative that the family structure help children discern the priesthood. One of her sons became a priest, while the other is studying in the seminary.

“I think that the future priests of the diocese need to come from our own families,” said Ramírez, “from the cultural backgrounds of our families. The callings are right here in Brooklyn.

“We don’t need to go across the ocean to bring priests. They’re right here in our families. They’re in our homes. We just need to prepare the groundwork as moms and dads and in the parish by praying for vocations and helping families to become more aware of how that can happen in their own homes.”

Rhonda Gruenewald led the English group. Her vocation to the married life paved the path for the life she leads today – first when she converted to the Catholic Church, and now speaking at dioceses around the country about practical ways for parishes to foster a culture of vocations.

Her guidebook, titled “Hundredfold: A Guide for Parish Vocation Ministry,” was the focal point for the day’s main theme and lessons. Derived from the Gospel of Mark, chapter 4: “And some seed fell on rich soil and produced fruit. It came up and grew and yielded thirty, sixty and a hundredfold.”

Both speakers shared practical tools and tactics to assist teams in their ministry through a framework that involves different phases depending on the status of their vocation ministries. They shared ideas for new groups such as how to gather more members for the vocation committees or how to communicate with one’s pastor – a key component to the success of their ministries, according to Gruenewald.

For more advanced groups, they shared the pages in the guidebook that contained dates in the liturgical calendar when a vocation-themed event could also take place such as “Take Your Pastor Out For Coffee Day” or “Share a Margarita With A Sister Day.”

Ramírez said the guidebook takes out the guesswork in the planning process by sharing pre-planned meeting agendas, to tips on how to run meetings and how to setup a budget.

Discussions also focused around the young Church – how to accompany them with their faith, how to help them discern their vocations but most importantly how to keep them involved in the Church.

St. Mary Star of the Sea, Far Rockaway, parishioner Susan Singh-Smith said that she not only gained more information, but also encouragement when it comes to dealing with the youth by remembering that catechism must include fun and games with a purpose.

Yet in 1964, then-Pope Paul VI put out a message on the radio for the first time calling for the entire world to pray for vocations. Nearly 54 years and five pontiffs later, Pope Francis reiterated the same message of listening, discerning and living out one’s vocation.

“I am on fire for vocation awareness and promoting vocations,” said Arrys Ortañez, of St. Sebastian’s, Woodside, “especially to the priesthood because we do need priests and also religious brothers and sisters. One of the takeaways from this thing is without the priests, there is no Eucharist, there’s no Mass.”

His excitement, energy and new knowledge didn’t waver as the workshops came to an end. “We can really make a difference and we can inspire young men and women to hear the call of God, to listen and pray that the Holy Spirit of God can touch their hearts and minds.”

One thought on “Douglaston Meeting Studies Tools to Recruit Vocations”