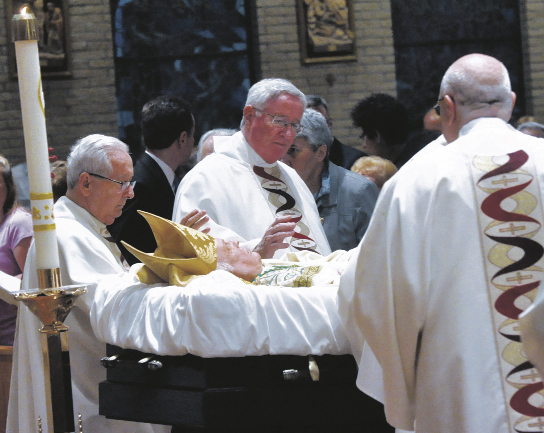 St. Ephrem’s parish, Dyker Heights, the church of the late Bishop Joseph M. Sullivan’s baptism and childhood, was the scene for his Mass of Christian Burial on June 12.

Bishop Nicholas DiMarzio was the main celebrant. He was joined by 13 bishops, about 130 priests and 1,000 relatives, parishioners and friends. Msgr. Joseph P. Nagle, pastor of St. Patrick’s parish, Bay Ridge, was the homilist.

“A man of integrity,” was how Father Snyder described Bishop Sullivan.

“If there was one message in his life, it was the message of God’s compassion,” he said. “Bishop Sullivan defined what charity should mean for a Catholic.”

Among his best memories of “Bishop Joe” was of the bishop leading a prayer inside the Oval Office at the request of President Barack Obama when the clergymen were permitted a private meeting with the chief executive in 2010.

Father Snyder said that although Bishop Sullivan “belonged” to the Brooklyn Diocese, he really belonged to everyone, and his legacy in social services “is going to go on.”

While many attendees knew the bishop in a professional capacity, some people, like Bea Blanding of Queen of All Saints parish, Fort Greene, where he had lived the last three years, knew him purely in a pastoral sense.

She will miss seeing him at Mass and at parish functions, but even more so, she will miss how he administered the sacrament of reconciliation.

“When I would go to him for confession, it was almost like talking to God,” Blanding said, making note of how softly he spoke in the confessional. “He made you feel like whatever you did, it was going to be okay. He was going to speak to God and make it okay for you.”

For others, Bishop Sullivan was an extended member of the family. Tears welled in Mary Macchiarola’s eyes as she recalled how the late bishop and her late husband Frank were “wonderful friends.”

United in Admiration, Respect and Love
“As I look out over this magnificently vast congregation,” Msgr. Nagle said in his homily, “I know … we are all united today by a common admiration, respect and love for Bishop Sullivan.”

He thanked St. Ephrem parish for welcoming home Bishop Sullivan and his family, noting that the bishop’s father helped raise funds to build the church, which played an important role in his children’s upbringing.

“And so it is very fitting that we come here to this holy place,” he said, “that we come home in order to celebrate the life of this extraordinary bishop and priest, and most especially, to celebrate his birth into eternal life.”

Msgr. Nagle shared several anecdotes about the bishop, including how he served as St. Ephrem School’s commencement speaker several years ago. As a memento of that occasion, he received a laminated copy of his eighth-grade report card, which showed excellent grades but also a C+ in conduct.

“He was a troublemaker even back then,” Msgr. Nagle said, and jokingly wondered how someone with such a grade became a Catholic bishop. 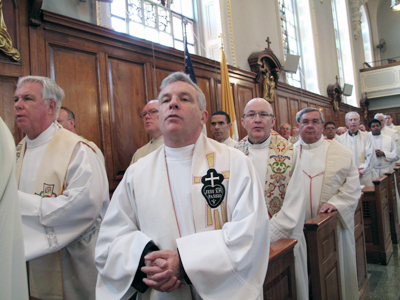 He mentioned how the bishop initially resisted social work studies, being very happy as a parish priest, and learning that was why he was being sent for further studies. He channeled what he learned, Msgr. Nagle said, into “over 50 years of passionate, creative ministry in Catholic Charities and Catholic health care.”

“We all know he was a giant in his field in his vision, leadership and accomplishments,” the monsignor said.
Three achievements of which the late bishop was particularly proud, he said, were: Catholic Charities-sponsored affordable housing built for the diocese’s poor and disadvantaged; early childhood centers which were started to help unmarried mothers gain an education and employment while their children received a head start in education; and the success of the state’s Catholic health plan, Fidelis Care.

More important than professional feats, Msgr. Nagle said, was his “great humanity,” which enabled him to make a difference in the lives of people.

“He was sympathetic to the human condition, and he understood and accepted the human frailties and weaknesses,” he said. “Because of those qualities, he was found very approachable and very real to people.”

Using the bishop’s own phrase for a genuine person, Msgr. Nagle called his friend “down-to-earth real.”

“He made us very proud to be a Catholic. Why? Because he gave … tremendous credibility to the Catholic Church in the public square in the board rooms of New York City, in the congressional hearing rooms in Albany and Washington and in the public speaking platforms across this country.”

Never strident in his tone, he said, Bishop Sullivan was “an intelligent, articulate, respectful and compassionate voice, always speaking on behalf of the disenfranchised, those on the periphery of life, the poor, the vulnerable and needy.”

Referencing the Gospel reading, in which Christ explains that anytime someone gives food, drink, clothing or welcome to the least ones, they do so for Him, Msgr. Nagle said, “That’s what Bishop Sullivan’s whole ministry in charities and health care was all about.”

At the heart of his episcopal coat of arms, Msgr. Nagle said his friend deliberately placed a replica of the Brooklyn Bridge.

“We all know Bishop Sullivan loved Brooklyn,” he said. But there was more to his choice, noting that Bishop Sullivan saw his new episcopal role “as being a bridge between the city of God and the city of man, a connector of people, a conduit of dialogue among people, always bringing people together to solve problems that affect them all.”

Through the years, he tried to bring about greater cooperation between human and health care services on the national and local levels. Most recently, Msgr. Nagle said, he was reaching out to lesbian, gay, bisexual and transgender Catholics to search for ways in which the Church could provide better pastoral care for their needs. 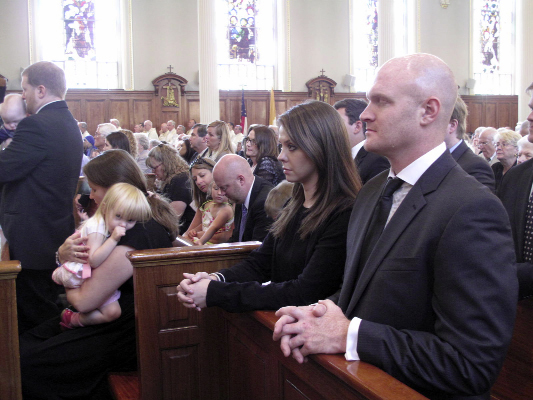 Before the final commendation, Bishop DiMarzio offered some thoughts on Bishop Sullivan, whom he said was “larger than life.”

“If you ever shook his hand, you would think you were shaking the hand of a bricklayer,” the bishop said, evoking laughter. He had “huge hands. They were as big as his heart.”

Bishop DiMarzio described Bishop Sullivan as a man of “some genius” with an angelic singing voice but said that “his voice was most used as an advocate for those most in need, and for that, he will certainly be remembered (not only) by our diocese but the whole City of New York and beyond.”

Calling him “an articulate advocate for many causes, especially those which were out of favor at times with society, and sometimes even with the Church,” Bishop DiMarzio noted that Bishop Sullivan was “not only loyal to the teachings of the Church but also put them into practice.”

“In (Bishop) Joe’s life there was that goodness which was beyond understanding, deep, deep goodness for which we now ask the Lord to have mercy on his soul.”
Past and present representatives of Catholic Charities Brooklyn and Queens, including Robert Siebel, CEO; Sister Ellen Patricia Finn, O.P., deputy executive director; and Thomas DeStefano, retired director, participated in the offertory procession. 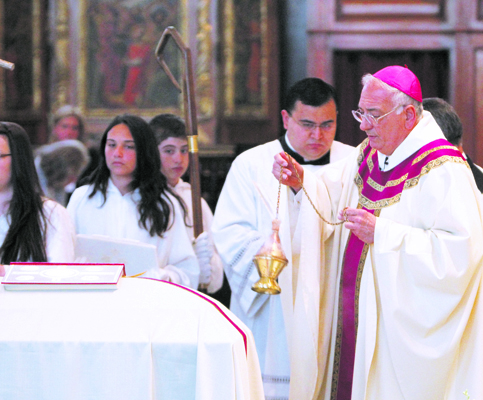 Recalling his 35 years working with the bishop, DeStefano said, “He was an outstanding man – a friend, a teacher, an advocate. He has left a tremendous legacy in Catholic Charities. … but what I value most is the friendship we had.”

“He was constantly directing me on how to drive,” DeStefano said, laughing. “He hated my driving. He used to offer it up for the souls in purgatory.”

Many at St. Ephrem’s Church came because they had been touched by the bishop on a personal basis.
“He (Bishop Sullivan) was a great supporter of all kinds of issues, especially helping poor people,” said Donald Doherty, a parishioner at St. Francis Xavier Church, Manhattan. “It’s a great loss for the many people for whom he was an advocate. We hope somebody will come along and take his place.”

“I knew him (Bishop Sullivan) very well,” said Sichenze, who also served on a state commission to evaluate hospitals with the bishop. “He was a wonderful man, a very common man. He was like a neighborhood priest … a Brooklyn guy.”

John Finan, Bishop Sullivan’s classmate at St. Ephrem’s School, recalled some memories. He said that at the end of the school year in the yearbook, he nominated Bishop Sullivan for “Most Liked,” “Most Intelligent” and “Most Athletic.”

First-Rate Guy from the Get-Go
“He was always a first-rate guy from the get-go in grammar school,” said Finan, a retired police officer who is now a parishioner at Holy Innocents Church, Ocean Township, N.J. “It was apparent then that he was going to turn out to be something. 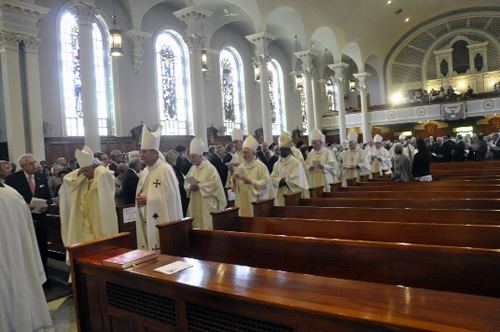 “I don’t know where to begin or end on what I think of him (Bishop Sullivan). He was a supreme role model for me just the way he carried the faith forward in so many areas … hospitals, homeless and all the activities he was in. And that was true right up until the end.”

“I have memories of when Bishop Joe went through his (epicopal) ordination 33 years ago, and to see all he’s accomplished in the community serving people and serving God, it’s an inspiration for everybody,” said White, a parishioner at St. Joseph’s parish, Red Bank, N.J.

White said the funeral Mass for his uncle was “very touching and very beautiful to see the entire community come out and celebrate his life.” He was also deeply touched by Msgr. Joseph Nagle’s homily.

White said the family was devastated to hear the news given the circumstances of his uncle’s death. Yet, after the initial shock, the family celebrated the bishop’s life and was moved by the support from the diocese.

“The Sullivan family always looks back with joy when a family member or friend moves on,” White said. “There is mourning, there is sorrow, but there is time to take to have a smile and to reflect on the good things that person brought to everybody.”

Tom Powers, a former parishioner at St. Ephrem, said the bishop “was one of a kind.”

“He was so bright and had so much information at his fingertips,” he said. “He had such a knowledge of those in need. He never lost sight of those who needed help. I’m a better person for having known him.”

Belinda M. Conway, who worked with the bishop at Catholic Charities, recalled his commitment to the poor.

“He insisted that the work be focused on the most marginalized of the poor, including those with AIDS” at a time when caring for people with the virus was thought to be radical.

“He was incredibly smart and thoughtful and was able to bring socio-economic issues to the forefront. He understood the politics and the economics, but he made sure that the interest of the poor was in the forefront. He represented the poor in the public arena.”

Contributing to this story were Marie Elena Giossi, Jim Mancari and Antonina Zielinksa.

For scenes from the bishop’s vigil mass in Middle Village, click here.