WINDSOR TERRACE — The Diocese of Brooklyn is taking its fight against Gov. Andrew Cuomo’s church attendance restrictions to the U.S. Supreme Court.

The diocese has filed an emergency application with the Supreme Court, asking that the highest court in the land agree to hear the case on First Amendment grounds. The diocese charged that imposing strict attendance — in some cases, as little as 10 people at the Mass — violates religious freedom.

The emergency petition was submitted on Nov. 9 by Randy Mastro, the attorney representing the diocese, to Supreme Court Justice Stephen Breyer.

Click here to read the Brooklyn Diocese’s emergency petition to the US Supreme Court. 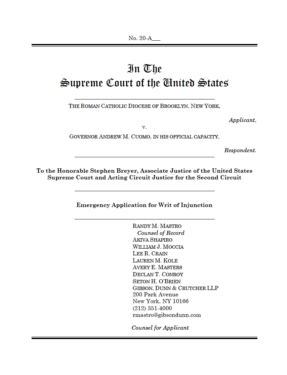 “We remain committed to reopening our churches, safely, and to vindicate our First Amendment rights. That is why we have petitioned the Supreme Court,” the diocese said in a statement.

“We are confident we will prevail for the good of our churches and those of faith who want to operate safely yet continue to suffer under the Governor’s express restrictions on ‘houses of worship,’ ” the statement continues.

The diocese petitioned the Supreme Court following a legal setback in its lawsuit against the governor over the restrictions he imposed on Oct. 6 on houses of worship in New York neighborhoods with higher than average COVID-19 positivity rates.

The diocese filed suit against Cuomo, in his official capacity as governor, on Oct. 8. On Nov. 9, the U.S. Court of Appeals for the Second Circuit rejected the diocese’s appeal of earlier decisions by judges in Brooklyn Federal Court, who sided with Cuomo. The decision came a few days after the diocese presented its case at a hearing at the Court of Appeals on Nov. 3.

“The court fully understands the impact the executive order has had on houses of worship throughout the affected zones. Nevertheless, the Appellants cannot clear the high bar necessary to obtain an injunction pending appeal,” the decision read.

But the Court of Appeals’ decision rejecting the diocese was not unanimous. Two of the judges, Raymond J. Lohier and Jed S. Rakoff, on the three-judge panel, voted against the diocese. A third judge, Michael H. Park, dissented. The fact that the decision was not unanimous is giving officials a sense of hope in the case.

In the petition to Justice Breyer, Mastro and his co-counselors contend that the case deserves to be heard in the Supreme Court.

Click here to read the the ruling made by the US Court of Appeals. 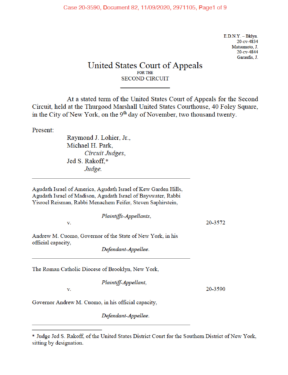 “The governor’s latest restrictions cap church attendance at 10 and 25 people in so-called ‘red’ and ‘orange’ zones, respectively, regardless of the capacity of the ‘house of worship,’ and thereby effectively shutter all of the diocese’s churches in those zones. His Executive Order, moreover, expressly singles out ‘houses of worship’ by that name for adverse treatment relative to secular businesses, and does so in a way that is not narrowly tailored to any compelling government interest, in direct violation of the First Amendment’s Free Exercise Clause,” the petition reads in part.

Initially, there were more than two dozen churches in Brooklyn and Queens in the red and orange zones. As COVID-19 positivity rates decreased, Cuomo eased some of the restrictions.