By Antonina Zielinska and Tim Harfmann 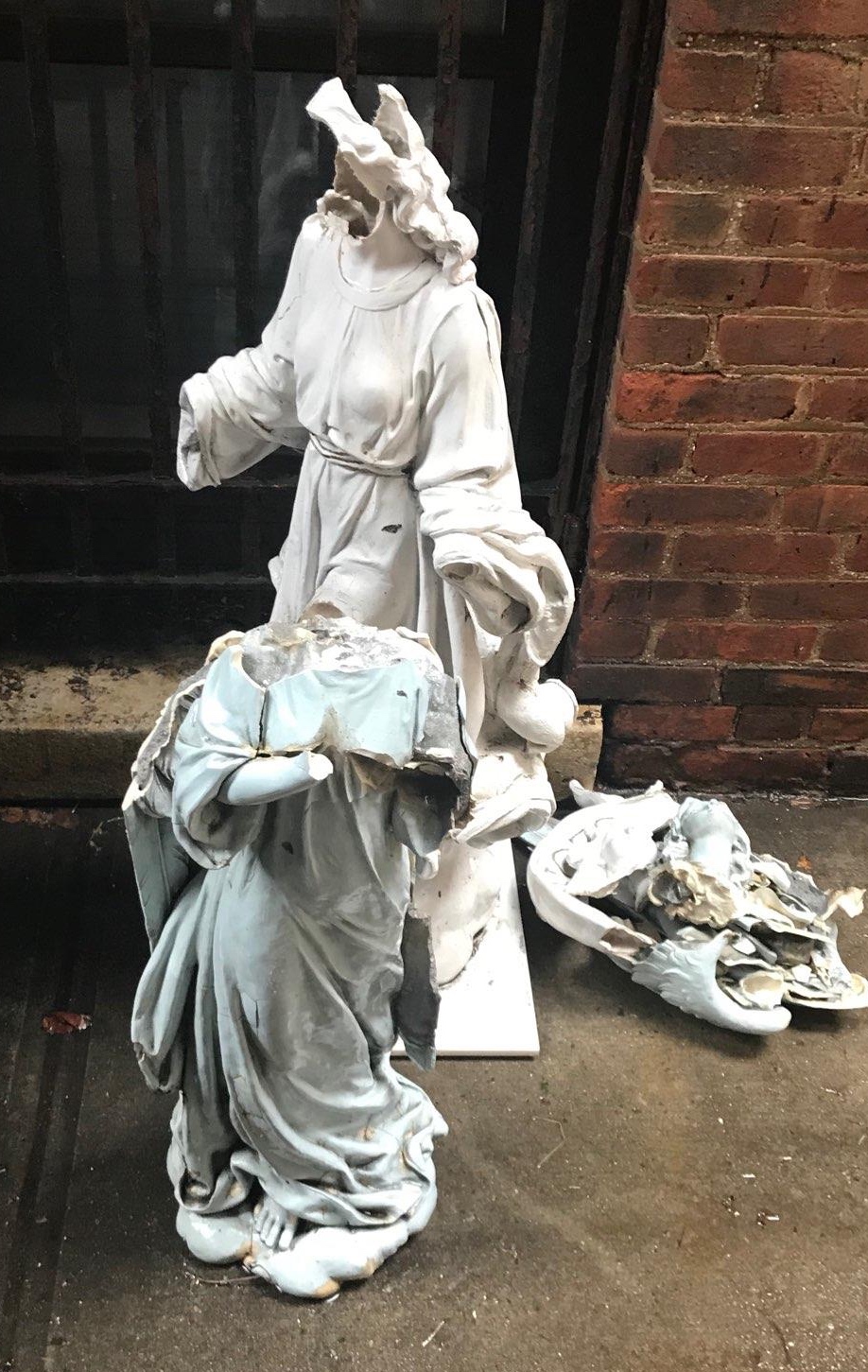 Brooklyn Borough President Eric L. Adams joined Muslim and Jewish leaders and other elected officials in offering a monetary gesture of support to the Catholic community Dec. 4 after a vandal desecrated angel statues in front of Our Lady of Consolation Church in Williamsburg.

An unidentified man was caught on surveillance video urinating on and then knocking down two statues of angels guarding the Virgin Mary in an outdoor shrine at the church at 4 a.m. on Sunday, Dec. 2.

Two angel statutes were destroyed by the vandal, but the statue of the Virgin Mary was left untouched.

This is reportedly the sixth time in eight years that statues have been vandalized at this shrine, which is open to the public even when the church is closed.

Father Wieslaw Strzadala, S.D.S., pastor, said he kept the same set up of the shrine after the last incident occurred two years ago.

He had replaced the statues but kept the shrine open. Now he is considering his options, including better surveillance and gating of the shrine.

“We must send the right message to those who are attempting to divide us,” the borough president said last Tuesday morning at a press conference in front of the 90th Police Precinct in Williamsburg.

“We must stand up and add our voice that we are our brother’s keeper. And that is why we are here together.”

The leaders gathered at the press conference are offering to make personal donations to replace the statues.

“All of us have our particular faith traditions, but we’re all catholic with a small ‘c’ because it means universal,” said Rabbi Potasnik.

Msgr. Kieran Harrington, vicar for communications of the Diocese of Brooklyn, who was present at the press conference, thanked the leaders for their outpouring of support and generosity.

But he also encouraged them to donate toward issues such as homelessness and drug addiction.

“Maybe we ought to be focusing, as a matter of public policy, on solving some of these deeper problems that are causing some of the fracturing, the breaking of our society,” the monsignor said.

In regard to the vandal, the Brooklyn priest had a personal message: “We’ll forgive you for breaking a statue, and if you need help, we’re here to help you in any way we can.”

Williamsburg residents were outraged at this latest act of violence.

“What was he thinking? That shouldn’t be tolerated at any time in this day in age,” said Daniel Rivera.

“It seems to be happening now more often than before. Although not too frequent, but it’s growing,” Rivera added.

At press time, police were still looking for the suspect in the surveillance video.

The NYPD reports that the suspect is a male, approximately 30 years old with a light complexion and straight, short brown hair. He is about six feet tall and weighs about 190 pounds. He was last seen wearing a dark-colored peacoat, beige slacks and Vann brand sneakers.

After he vandalized the statues, he was seen going southbound on Metropolitan Ave. toward Bedford Ave.