Academic Excellence in a Tradition of Service

At Sacred Heart, students learn the 21st-century skills they will need to succeed in high school, college or in their chosen careers. They also learn to be moral, responsible citizens through the many service projects undertaken throughout each school year. Service is an important component of the education that each child receives. At Sacred Heart Catholic Academy, students are taught to have a worldview, asking, “What can I do to help?”

Since September, students have:

• Held a cupcake sale in support of the St. Francis Breadline

• Made Christmas cards for veterans

Academically, 100 percent of students in the Class of 2017 were accepted to their first-choice Catholic high school, many with academic scholarships. In addition, the Class of 2017 is represented by one student at the Bronx H.S. of Science, two at Townsend Harris H.S., two at LaGuardia, one at Regis H.S. and one at Convent of the Sacred Heart.

Sacred Heart has a strong commitment to education in art and music from nursery through eighth grade, and is proud to offer instruction in Spanish from kindergarten through eighth grade. Educators teach to the standards in mathematics, English language arts, science and social studies. This year, the academy began a one-to-one Chromebook initiative for junior high students.

Looking to the future, the academy plans to install a state-of-the-art STREAM lab and a playground.

The work started by the Sisters of Mercy is still going strong. 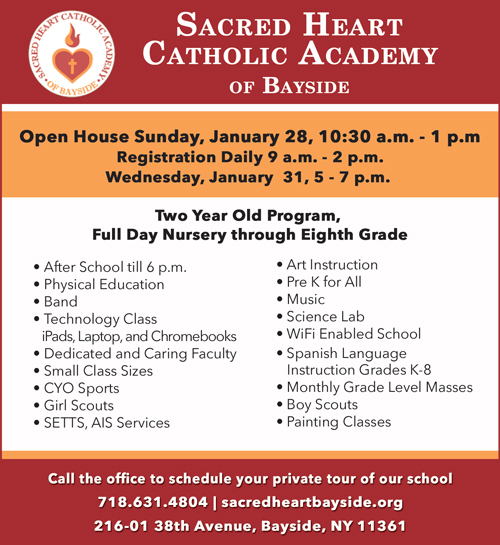