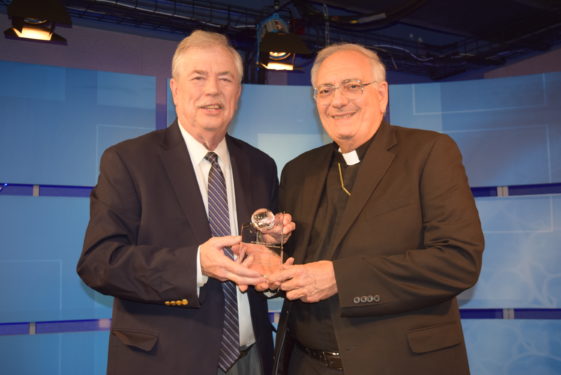 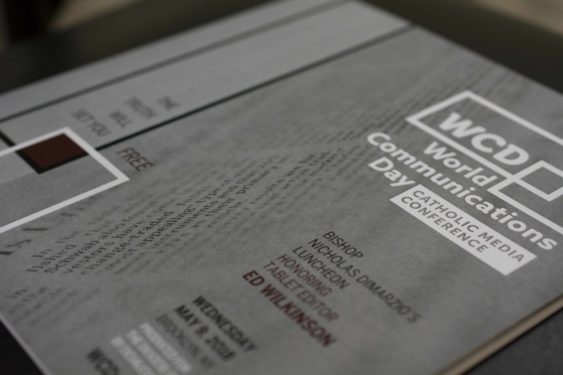 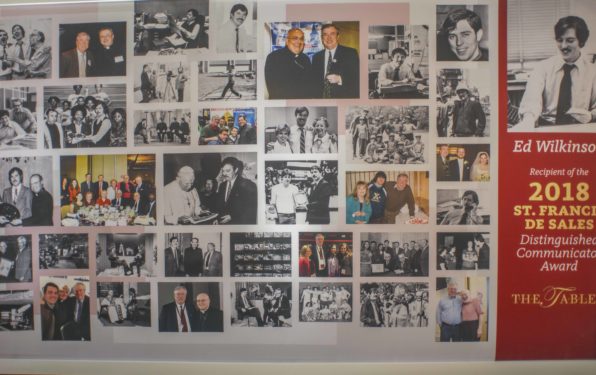 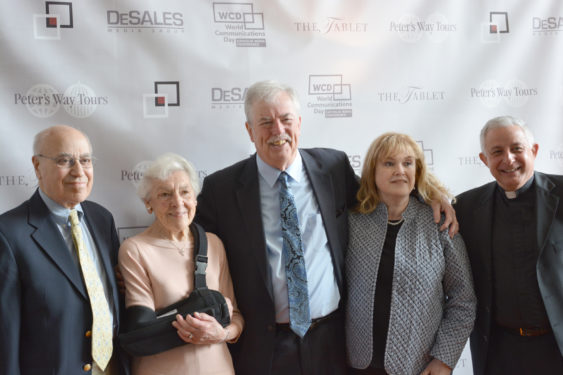 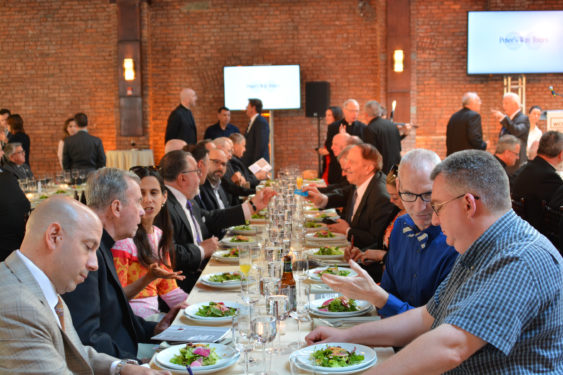 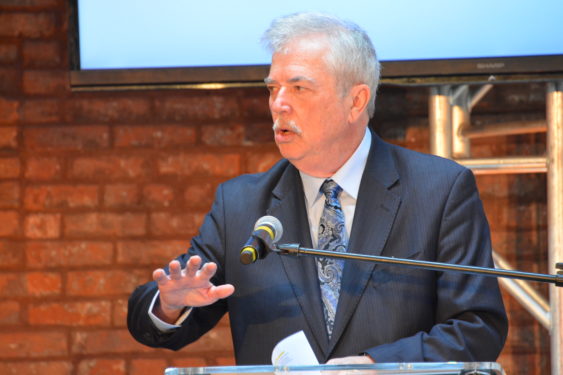 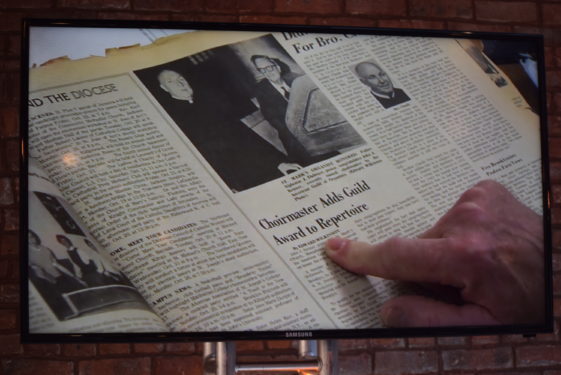 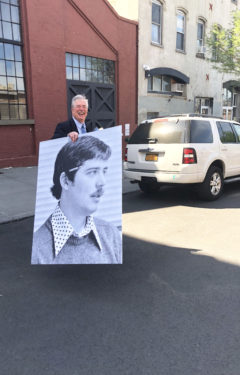 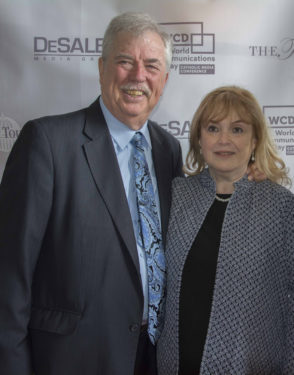 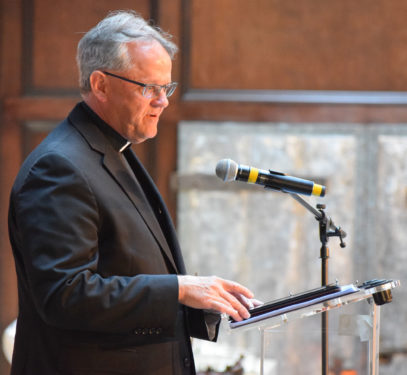 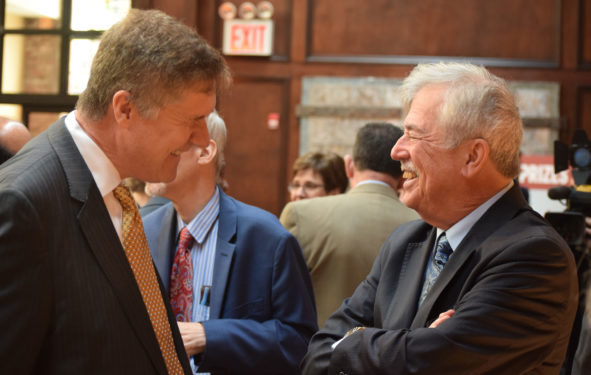 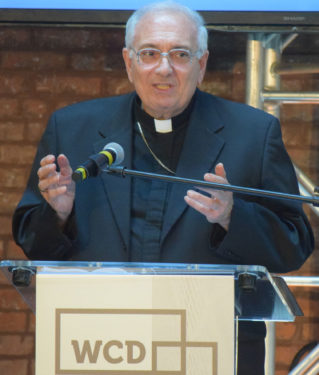 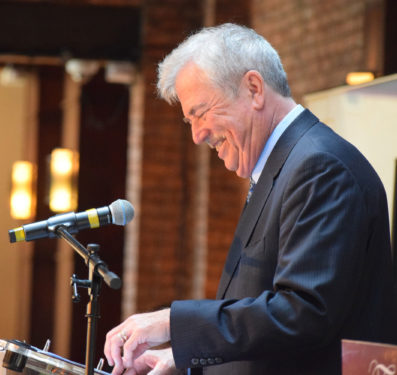 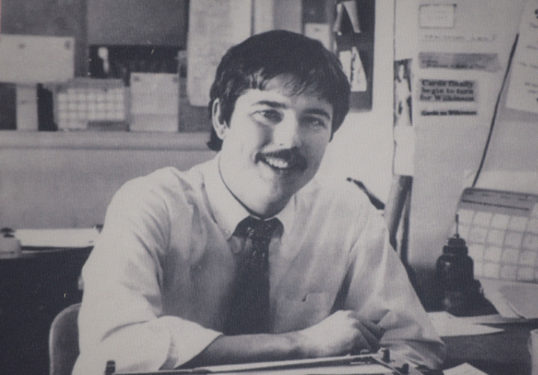 “I’m just a loyal member of the church who is trying hard to tell the story of Catholics in Brooklyn and Queens.”

The Tablet Editor Ed Wilkinson described himself in those words after receiving the St. Francis de Sales Distinguished Communicator Award at the 27th annual diocesan celebration of the World Communications Day, May 9.

Presenting the award, Bishop Nicholas DiMarzio lauded Wilkinson as “a man of passion when it comes to the news.”

More than 200 people attended the luncheon event, held at 26 Bridge in DUMBO, and organized by the DeSales Media Group, parent company of The Tablet.

Mistress of ceremonies for the event was Currents News anchor Liz Faublas, who kept the afternoon light and lively as she guided guests through the program.

In his keynote, Wilkinson spoke about the value of the Catholic press and diocesan communications, which unlike the secular media, aim to report the news in a fair and impartial manner, “starting from a Catholic view of life.”

That lens shapes how The Tablet reports the good news the secular media might dismiss, and the painful stories that the publication has not shied away from reporting in its 110-year history.

And Wilkinson has been at the center of it all – telling the stories of the people of God in Brooklyn, Queens and beyond for 48 years as a member of The Tablet staff, and as editor since 1985.

“There are many ways of being a member of the church – some maybe better than others,” Wilkinson said, reflecting on his role as a Catholic communicator, “but I think I have always tried to give credence to the many different voices within the church.”

Bright Spots Along the Way

One of his greatest joys, he said, has been leading The Tablet’s Bright Christmas campaign, which has collectively raised well over a million dollars for children and families in need at Christmastime.

Though times have changed, and digital media has found a foothold in news consumption, Wilkinson affirmed that there is “still a demand and need” for print journalism in both the Catholic and secular spheres.

To highlight the importance of truth in journalism, Pope Francis selected as this year’s theme for the church’s celebration of World Communications Day, “‘The truth will set you free’: Fake news and journalism for peace.”

He shared three pieces of advice that the late cardinal, who was a journalist in his own right, once offered to a congress of Catholic journalists: be dedicated to truth, practice charity and communicate hope.

“If that is the creed of a Catholic journalist, I think we can all agree that Ed Wilkinson has professed it faithfully in his life and work,” Father Dailey said.

“And in today’s era of fake news, that journalistic creed is needed more than ever.”

As a testament to Wilkinson’s creed as a Catholic journalist and gentleman, colleagues and friends from every stage of his storied career attended the luncheon.

“To be able to thank Ed Wilkinson for his work is an honor,” said Bishop Cisneros. “I remember when I was newly ordained in the diocese and seeing the dedication and the work he was doing was so inspiring.

“The history of faith and culture of the people of the diocese has to be remembered and celebrated and no one does that better then he does.”

Woods worked at The Tablet for a decade, and said that in the years since he has often found himself saying and doing what he learned from Wilkinson.

Videos shown during the event highlighted Wilkinson’s day-to-day duties as a newspaper editor and guests could view displays of his personal keepsakes and photos, as well as reproductions of historic front pages from The Tablet. 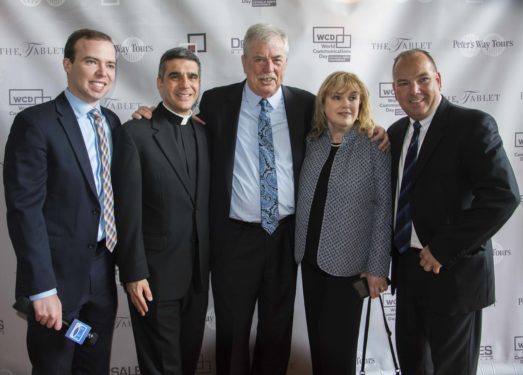 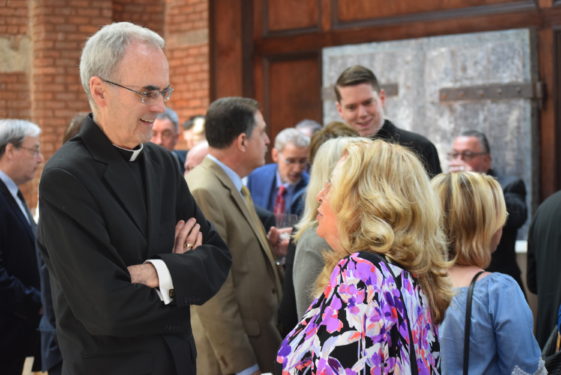 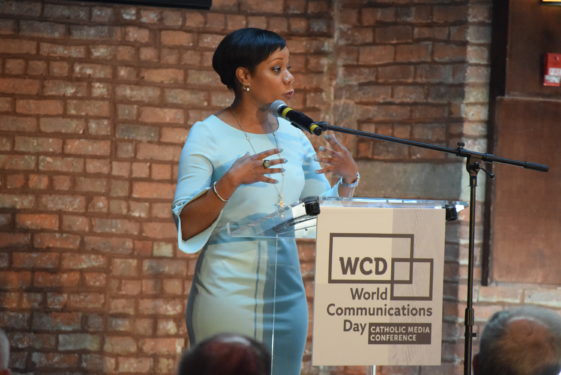 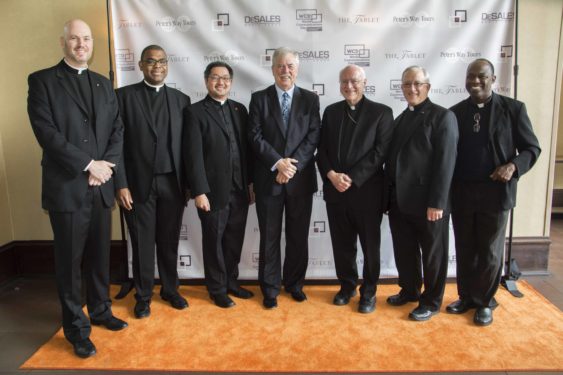 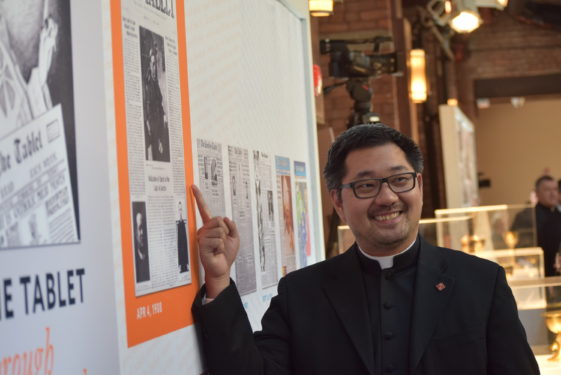 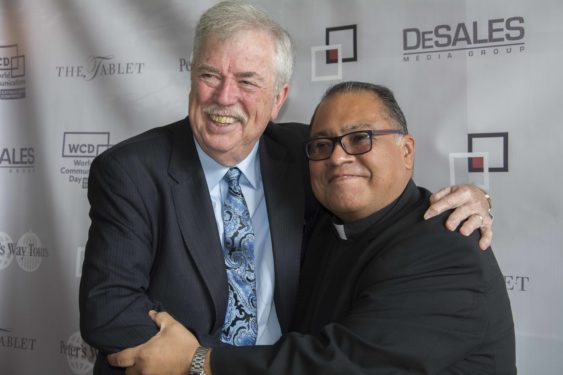 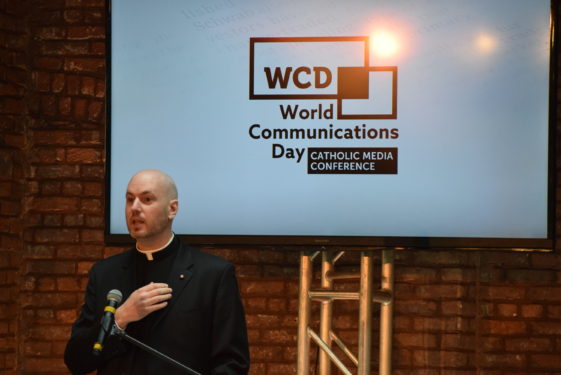 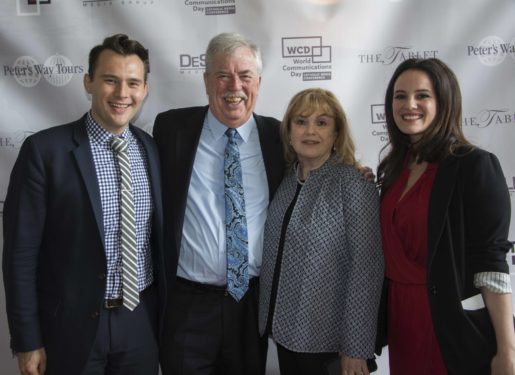 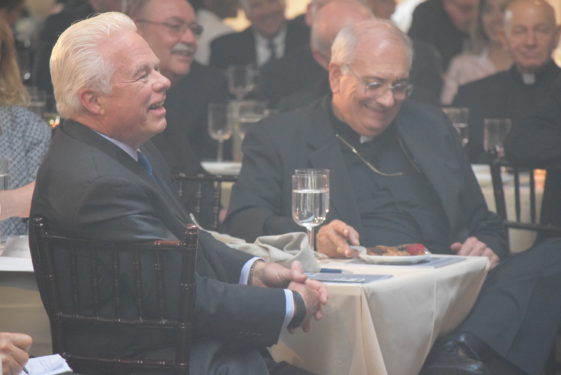 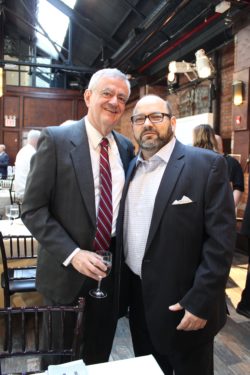 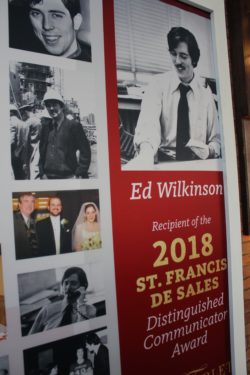 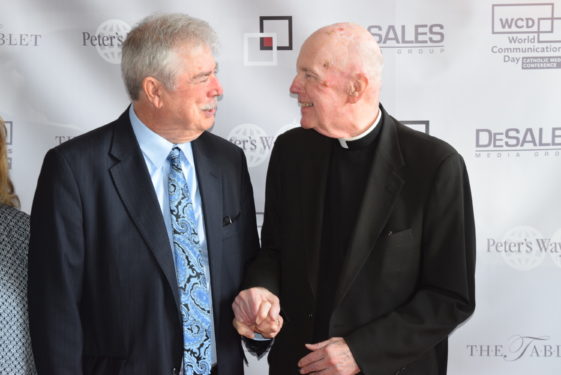 World Communication Day 2018 not only invited guests to take a stroll down memory lane through the steps of Wilkinson’s tenure at The Tablet, but also welcomed conversations on present-day diocesan media efforts.

Today, NET’s programs provide the New York area with Emmy-award winning and nominated programs including “City of Churches,” which brings viewers into historic churches within Brooklyn and Queens, “Shelter in the City” gave viewers a glimpse of homelessness through the lives of a father and son and was screened at various film festivals. The documentary “Refugees: Enemies or Victims?” also received an Emmy nod.

Even before Bishop DiMarzio declared a Year for Vocations, Wilkinson’s show “On The Block” has been sharing what it takes to say “yes” to the priesthood. By sitting down with various priests from the diocese and interviewing them about their vocations, the simple conversations brought new life and perspectives to the men behind the altar.

“I think communications is what Jesus is all about and being able to effectively communicate the Word of God is what today is all about,” said Msgr. Michael Hardiman, former chairman of The Tablet’s board of directors.

“It is a great opportunity for all these people who represent different aspects of the mission of communicating the Word to come together to honor Ed Wilkinson for the wonderful work he has done for so many years.”

In his acceptance speech, Wilkinson also shared personal anecdotes, noting that he has been “indebted to Brooklyn priests” from the day of his baptism, and stories of his early years at The Tablet. He also made sure to thank his wife of 28 years, Sheila, and his “esteemed mentor,” Frank DeRosa.

Wilkinson’s role will evolve in the coming months as he transitions to the position of editor emeritus and takes on new responsibilities within DeSales Media’s operations.

In closing, he expressed that it has been a privilege to serve as “the guardian” of The Tablet for nearly five decades. “It has been an honor to be part of this legacy,” he said.