Just before the June sunrays reached peak intensity in Prospect Park, when the UV lights were making the rounds across Baseball Field No. 7, stood a softball player in the batter’s circle who didn’t need loads of luck for her upcoming Collars vs. Scholars game at MCU Field, June 25.

Before Sister Shirlee Tremont made her final vows with the Sisters of St. Lucy Filippini, and before she became part of the faculty at St. Bernadette Catholic Academy in Dyker Heights, the Atlantic City native played Division I softball at Philadelphia’s Temple University.

With less than two weeks until the first pitch between the Scholars team, which is composed of Catholic Academy principals and one religious sister, and the Collars team – priests, transitional deacons and one auxiliary bishop – a warm-up practice was scheduled. Fathers Sean Suckiel and James Kuroly showed up to the softball field and traded their religious vestments for casual gear that matched their competitive spirit.

Sister Shirlee also dusted off her habit on the field, put on a Brooklyn Cyclones cap and scoped out her competition. After a couple run-throughs, her good sportsmanship took a backseat as if her Temple days came back to life and rejuvenated her thirst for victory and a little bit of good ol’ trash talk.

“It’s good that they’re here practicing,” she said. “There’s going to be some ground balls getting through the infield. They’re good holy men, but there’s a lot of holes in the infield.”

More than just being on the starting lineup hoping for a couple holy homeruns against each other, the upcoming pre-game at Coney Island aims to symbolize the value of Catholic education.

“One, Two, Three, Scholars!” In good sport and spirit, both teams recognize that the upcoming game at MCU Park will highlight the value of Catholic education in the diocese.

Despite a little competitive banter at the beginning of the practice, the captains from both teams pictured here with Sister Shirlee Tremont, M.P.F., shared some laughs and good sportsmanship.

Fathers Sean Suckiel and Kuroly and their game faces.

Father Espinal and his competitive grin.

Three players from the Scholars team showed no mercy on their way to the baseball field at Prospect Park. A few of their opponents from the Collars Team were also waiting for their arrival so that the softball showdown could begin.

Father Ed Kachurka gives a thumbs-up after completing a practice game at Bush Terminal Park between his priest-teammates and parishioners from St. Michael’s.

Team photo time with some of the players on the Collars team.

Softball practice ends on a good note - no injuries!

Sunset Park baseball fields in all its glory.

He's up next! Father Kuroly gears up for pitching.

“This is a great opportunity to show that Catholic education is strong in the Diocese of Brooklyn,” said St. Francis DeSales Catholic Academy Principal Chris Scharbach. “We’re just finishing up our school year and the last day of school is coming.

It’s a great way for the kids, the principals, the priests, the whole school and parish communities to really celebrate a great year of Catholic education.”

The Belle Harbor principal teamed up with John O’Brien from Marine Park’s Good Shepherd Catholic Academy and both took turns between staying in the outfield and pitching on the mound. Scharbach realized it was a good move and confidence booster.

“I think we got a guarantee win on the 25th,” he said. “I think we took out our secret weapon tonight, Sister Shirlee. I think we displayed to the world that sister is ready to play. She’s got a mean split-finger fastball.”

Except what the Scholars team didn’t know during the afternoon warm-up was that the Collars team had a second practice later that afternoon in Bush Terminal Park.

Under the direction of St. Michael’s pastor, Father Kevin Sweeney, some of his priest-teammates took to the baseball field in order to play a full-game with parishioners from the Sunset Park parish. While the Cathedral Prep Hall of Famer started his journey on the diamond at Cathedral Preparatory School and Seminary as an infielder and pitcher, he was all smiles in the outfield. After an hour or so of the priests swinging the bat, yelling between first and second base, Father Sweeney was content because of a rather different outcome. 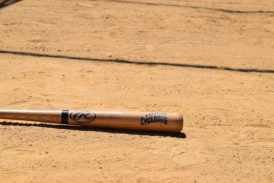 “I think the goal is not to get hurt,” he said. “We accomplished that today. We’re happy about that. If we can do that on the 25th, it’ll be a success for everyone.”

One player on the Collars team who might be the least resistant to sustaining injuries is the priest playing centerfield. While Father Peter Purpura is a certified Muay Thai kickboxer, the rector of St. James Cathedral is a novice on the diamond.

“This is the first time I swung a bat in many years,” he said, “but I feel comfortable enough. It should be competitive. It should be fun.”

His prediction on who will be MVP? Father Christopher Bethge. “He’s good on offense and defense.” 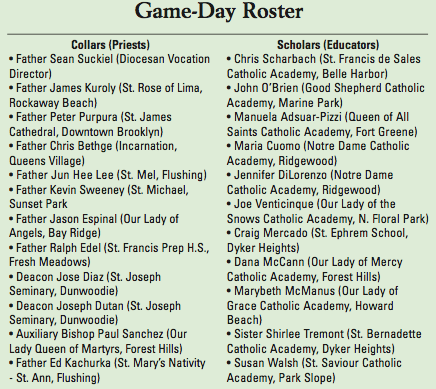