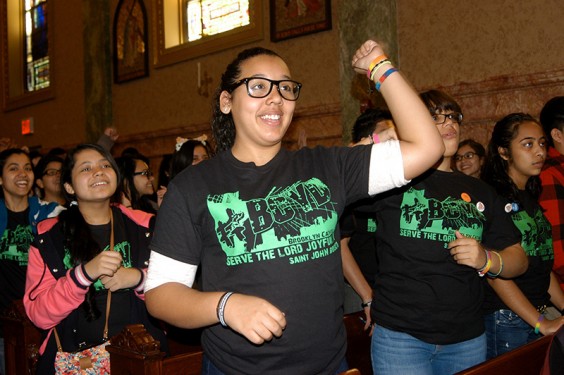 Brooklyn and Queens teenagers came by the hundreds to BCYD. (Photos by Marie Elena Giossi) 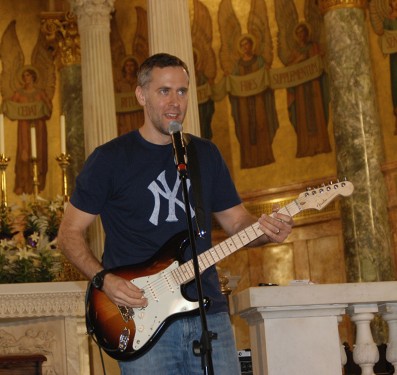 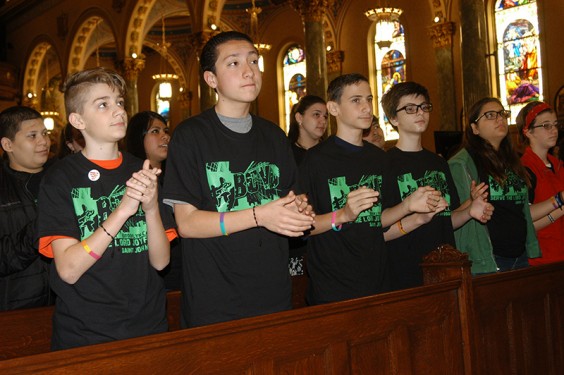 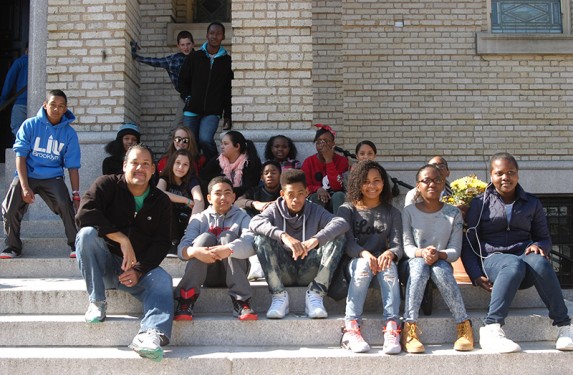 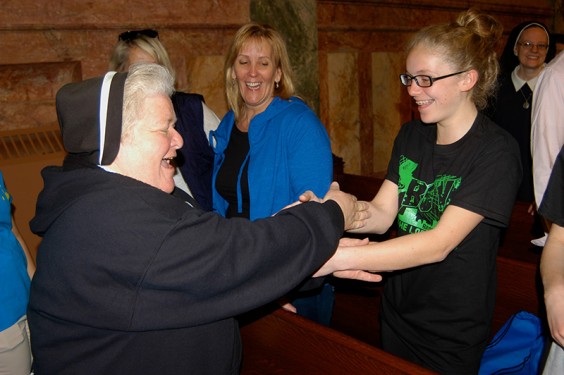 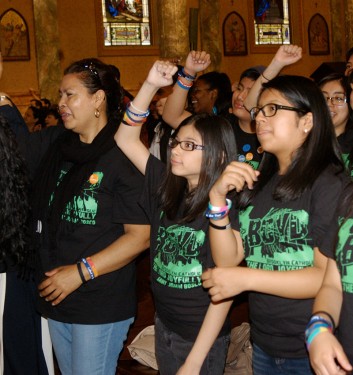 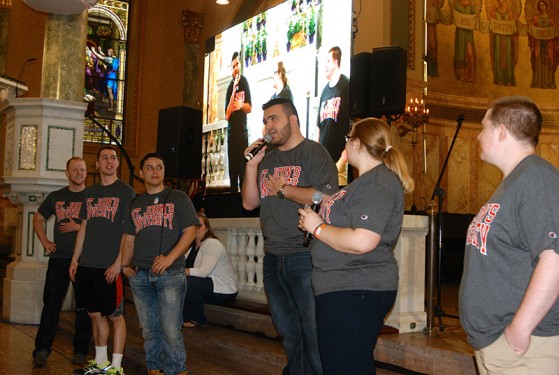 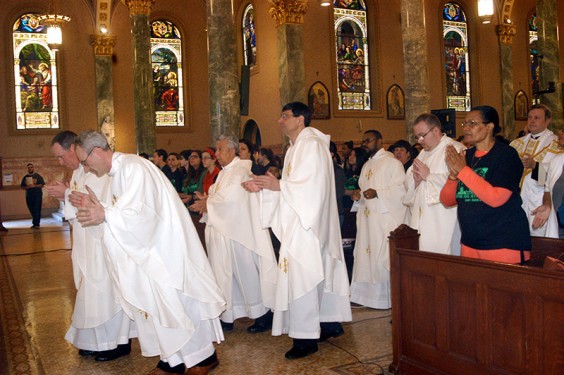 Prayer, talks, music, fun and fellowship were all part of the day for junior high and high school teens from parishes around the diocese. A similar event was held for college students on the previous evening at St. John’s University, Jamaica.

With “Christ being the central figure amongst them,” Lynch hoped they’d experience a “more intense feeling of their Catholic identity and meet other youth on the Catholic journey.”

Theresa Whiteman, youth minister from St. Teresa of Avila, Prospect Heights, brought six teenagers who heard about the day and wanted to participate. “They look forward to mingling with the other kids,” she said as they entered church.

An annual event since the early 1990s, the day is sponsored by the diocesan School of Evangelization’s Youth and Young Adult Faith Formation Office, coordinated by Paul Morisi. This year’s theme, “Serve the Lord Joyfully,” was drawn from the teachings of St. John Bosco, patron saint of youth.

“The theme came to me through the mission that Pope Francis has put us towards – really being joyful Christians,” Morisi said.

“Here you’re seeing a thousand young people worshipping with excitement and vigor and I think that says something to their heart,” he said. “Our hope is that they’re going to be on fire here and then become active members of the church.”

Assisting on the altar were transitional deacons, including Deacon John Gribowitz, who preached the homily.

“Today is the day to invite the joy of the Lord in,” the deacon told the young people.

But that invitation can get lost amid the many distractions in life, he said. When he realized his iPhone and Facebook were separating him from God and interrupting his prayer life, he gave them up. While he wasn’t advocating a mass technology fast, he told youth that a break from the distractions creates room for a deeper connection with God.

Joseph Peraglia, 15, from Holy Trinity, Whitestone, enjoyed the deacon’s homily and the Mass as a whole. “I think this was probably the most exciting Mass I’ve ever been to with all of the singing and celebrating,” he said.

Chris Stefanick, a husband, father of six and founder of Real Life Catholic, a movement to re-engage young people in the Catholic faith, delivered the keynote address.

Using music and personal experiences, he told young people how they were “made for God.” And while it’s easy to be attracted to other gods – like drugs, sex, money, pleasure and power – he explained that those gods will never bring the true fulfillment that the human heart can only find in God.

“Saints are simple reminders that this faith … is all about a Person who is in love with you,” he told youth.

Stefanick, who speaks to 50,000 young people and adults each year, later said that he feels diocesan youth day events such as this one vital “in converting kids and bringing them from a cultural faith to a relationship with Jesus.”

“When they make a flip over into that deeper relationship, they don’t only stay Catholic for life, they realize the point of life. That’s real success that nothing in the world can take away,” he said.

“Chris (Stefanick) shared some deep words with us,” said Justin David, 14, from St. Matthew Church, Crown Heights. “He made me realize my relationship with God should be stronger.”

“I expected something boring but it’s really been fun,” shared Wendy Sanchez, 20, from St. Mary-B.V.M. Help of Christians, Woodside, while enjoying a box lunch and an exhibit of Catholic vendors. This was her first diocesan youth event.

“I like the music and Mass was great,” Sanchez said. “It’s clearing my mind and making me think more of what kind of person I should be.”

Participants had an opportunity for reflection and confession during the Holy Hour. Father James Rodriguez, diocesan vocation director, spoke about vocations to the priesthood and religious life. He encouraged attendees to discover God’s will for each of their lives.

While there is time to consider their life’s calling, Father Kuroly focused their thoughts on what they’re called to do in the here and now.

“Today, Christ is calling us to serve Him joyfully, to give Him a chance and tell others … that we are sons and daughters of God,” he said.

As the day came to a close, Michael Santos, 16, from Holy Trinity, said the event “refreshed my faith. It made me feel really proud to be Catholic.”

He particularly enjoyed Stefanick’s talk. “He (Stefanick) made me question, ‘Am I really living my faith to the fullest,’” said Santos, who had something to ponder on his bus ride home.