The newest adult members of the Catholic Church in Brooklyn and Queens came together to pray with their bishop just two weeks after receiving their first sacraments.

“You are challenged to bring the Light of Christ,” Bishop DiMarzio said. “Are you willing to accept the cost of being a disciple?”

Sonia Burnett, from St. Clare, Rosedale, publically gave her answer at the end of the Mass of the Neophytes when she volunteered to give public witness to her conversion.

“I prayed every day that the Lord would lead me and I would follow,” she said. She knew she had to make changes to her life, but she did not know how.

She said that when she received the Sacrament of Baptism at her parish during the Easter Vigil, she felt freed from her sins. “All I want to do now is serve the Lord because he reached me with his unconditional love.”

The bishop urged the new members of the Church, known as neophytes, not to feel discouraged by human limitations or by a lack of the immediate solutions to their shortcomings.

“It’s not what we do. It’s what Jesus does in us,” he said. “You have to have the Holy Spirit… Don’t be afraid. Jesus is with us.” 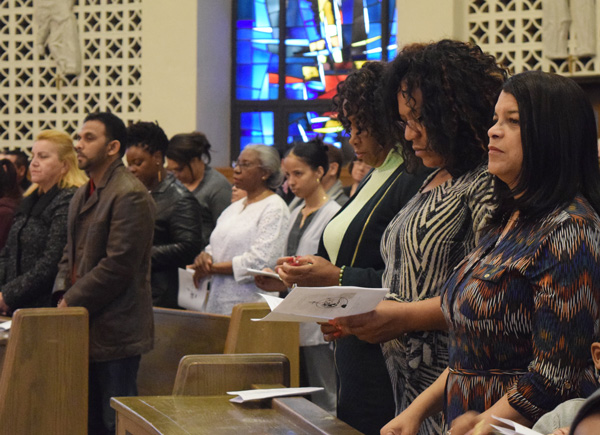 The bishop said the new parishioners are in a position to spread the Gospel “not because you read a book and you know the answers,” but because they have been given the gift of the Holy Spirit.

However, they must nurture this gift by meeting Christ in the Eucharist “not just when the weather is good, not just when we feel good… but every Sunday possible.”

It was the yearning for the Eucharist that helped Margaret John, from Sacred Heart of Jesus Church, to make the leap and join the Church.

She was married in the Anglican Church. But she felt there was something missing. She went from church to church, searching for that which she did not understand. Then she came across EWTN and Mother Angelica’s talks. She began attending Catholic Mass before work and when her grandson started attending Sacred Heart School, she became active in the parish, while continuing to go to her Anglican church.

With the support of her family, her fellow parishioners and Jesus and Mary, she was able to receive the Body of Christ for the first time this Easter.

Bishop DiMarzio told the neophytes that they are just at the beginning of their journey.

“There is much for you to learn,” he said, and encouraged them to embrace works of mercy. “Take this new beginning as an opportunity and keep learning.”

Udezeh married a Catholic 24 years ago, but did not join the Church until two weeks ago. She said she is going to need a lot of help.

“I ask everyone to pray for us and to support us to do the right thing,” she said.

Joseph Doobar, from St. Nicholas Tolentine, Jamaica, echoed the sentiment, asking for prayers so that he could do what God intends for him.

“Since I started this journey the devil has never been this active in my life,” he said. The difference being, that he now has the tools to resist him. 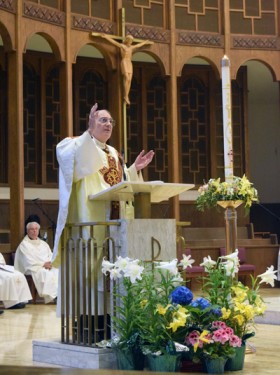 Doobar’s journey started with the death of his nephew, who had a severe case of Prader-Willi syndrome that made him dependent on his mother for the most basic of tasks.

When Doobar went to Jamaica for the funeral and to console his sister, he had a conversation that would change his life. His sister gave him step-by-step instructions on how to change his life, just nine days before she died. He did not follow her advice until three months later, when a store clerk urged him to change his life in a very similar way.

“I don’t know the end of this,” he said. “My plan for my life is to follow the teaching and commandments of God to the best of my ability.”

Ted Musco, executive director of the School of Evangelization, thanked the neophytes for coming to the Mass and explained that this year the Mass took place on a Saturday to allow time for formal presentations and for fellowship, “to help share our stories with one another.”

He encouraged all the neophytes to continue being active in the Church and partaking in the events offered by the School of Evangelization, details for which can be found online at meetmein.church.

The neophytes had an opportunity to share their stories with each other during lunch after Mass. Before they left, they heard a presentation in either English or Spanish.

During his talk, he encouraged the neophytes to build a relationship with God through the Word and through service. He also acknowledged that it may be difficult to transition from the smaller R.C.I.A. groups to the larger church community. So he encouraged them to join smaller parish groups to continue their formation.

He concluded his talk by reminding the neophytes that they are now part of the Body of Christ, which means they are the hands, eyes, feet and heart of Christ here on Earth for others.

Father de Siano said he had a lot of fun spending time with the neophytes.

“They help us see what’s going on in ourselves, in our Catholic life,” he said. “The neophytes help the broader Catholic church see the process of conversion that is happening all throughout the Church.”

Father de Siano said the day enabled the neophytes to spend time with each other, their sponsors, spiritual directors and Church leadership. This hopefully, helped them feel encouraged to be disciples.

“And I think it’s a great idea, I don’t know of another diocese that does something like this,” he said.