EAST ELMHURST — Plans for a long-desired interfaith chapel at LaGuardia Airport have grown by at least another 160 square feet, with high ceilings and a wall of glass windows, according to architectural renderings.

Father Chris Piasta, an airport chaplain, recently shared diagrams of the space as proposed by Delta Airlines’ Terminal C at LaGuardia. He is working with the airline to possibly include two stained-glass windows that originally hung in the former Lady of the Skies Chapel at JFK Airport.

The plans, which call for 560 total square feet, were sent to Father Piasta and chaplains of other faiths by Delta’s Ryan Marzullo, who oversees the airline’s construction projects at JFK and LaGuardia.

Neither Marzullo nor Delta spokespersons could be reached for comment. However, Father Piasta shared an email from Marzullo explaining the plans.

In it, the construction supervisor noted that the chaplains originally sought 300-400 square feet for a religious worship space in the new Terminal C. But Delta’s design team saw an opportunity to do more.

“We were able to create a space that is 560 square feet, with high ceilings and exterior windows,” Marzullo said. “It will be a beautiful space for our customers and employees to use for prayer and reflection.”

And, Father Piasta noted, there is plenty of room to celebrate Mass in the design, which is clearly designated as a “chapel,” not just a conference room.

He had anticipated that the space might be on a lower level.

But Father Piasta said the diagrams are pictures that convey “the proverbial 1,000 words.”

“I mean, this is really nice,” he said. “It’s upstairs, and it’s very nicely located. I think they took it seriously, and they did it in a way that is appropriate.”

Father Piasta is the Catholic chaplain at LaGuardia and JFK Airports. Previously, LaGuardia had no specific area designated for religious services, although Father Piasta did conduct services occasionally in hangars.

In 2016, LaGuardia broke ground on an $8 billion renovation involving Terminals B, C, and D. At that time, Father Piasta asked for a designated chapel. Developers responded that a prayer room would be available in Terminal B, but that was considered too small by the chaplains.

Representatives from the Port Authority, the office of Gov. Kathy Hochul, DeSales Media Group, and Delta Airlines met earlier this year to find a possible solution. 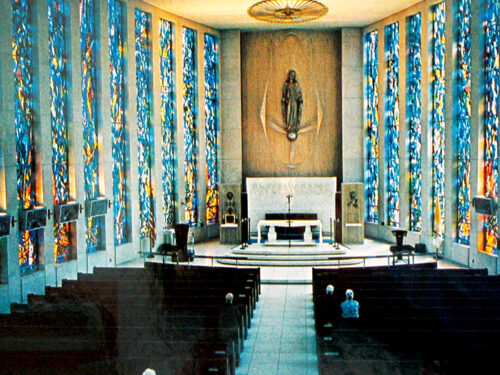 Two opportunities subsequently emerged. Delta offered to set aside space for a prayer room beyond the airport security gates, to be open for use in 2023.

The Port Authority of New York and New Jersey, which operates the airports, committed to making a pre-security conference room available in late fall or early winter of 2022 for religious activities in the Central Hall.

That room would have storage space for chaplains of all faiths to store items needed for worship.

Port Authority spokesman Tom Pietrykoski said earlier in August that those plans are moving forward but added that the availability of the space has been bumped to later in 2023 due to “general construction delays.”

Delta Airlines is combining Terminals C and D into one Terminal C. A portion of it officially opened with much fanfare on June 4, with Gov. Hochul leading a ribbon-cutting ceremony.

The event marked the opening of the second of four new concourses. Other changes include better security and baggage handling services, improved dining options, and 10 new gates able to accommodate various narrow-body aircraft.

Delta plans to finish the Terminal C renovation by the end of 2024 — about two years ahead of schedule — with 37 gates across the four concourses.

But the total job — including the new chapel — is not yet complete.

“Two things to keep in mind are that this chapel will be located behind security, and it will not be ready for use until late 2023,” Marzullo wrote in the email.

Meanwhile, Father Piasta said Delta officials are willing to explore building the new chapel with two of the three remaining stained-glass windows from the original Our Lady of the Skies chapel. That building served JFK from 1955 until 1966 when it was dismantled to make way for new airport construction. The windows have been in storage at JFK since then.

Father Piasta described the windows are beautiful but nondescript, so they don’t promote a particular religion. He said they would make a great addition to the new LaGuardia chapel by conveying the legacy of the chaplaincy at both airports.

“Working with Delta is nothing but pleasure,” he said. “It doesn’t take much for us to establish a good working relationship with them that is transparent. It’s just a great partnership.”