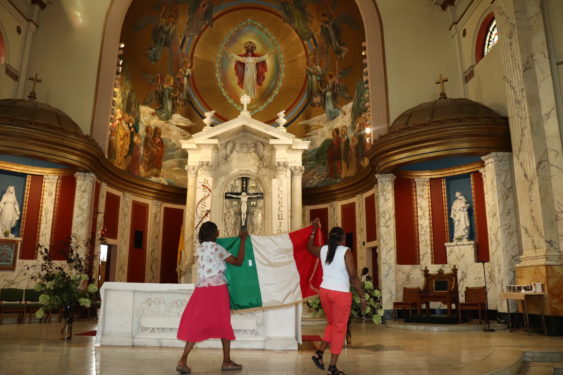 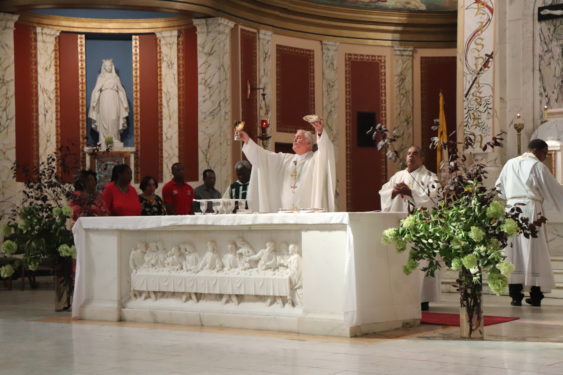 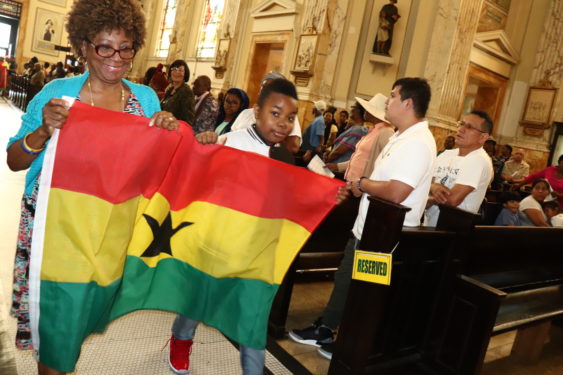 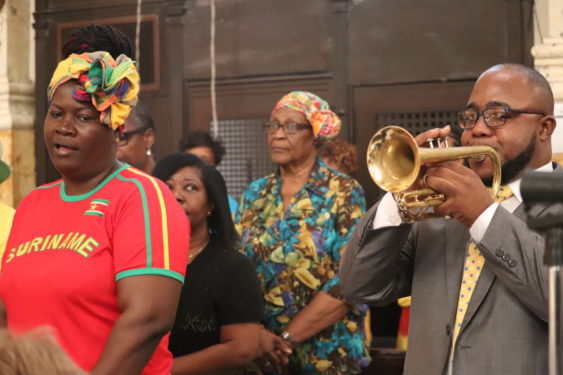 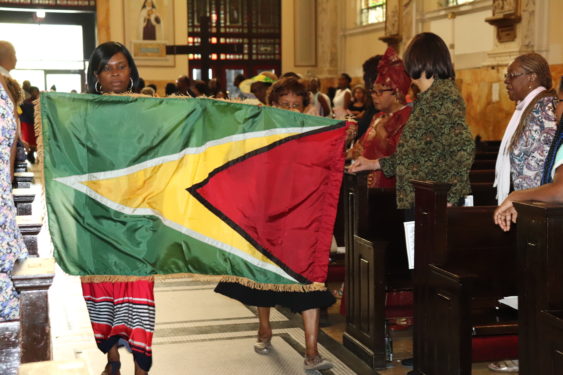 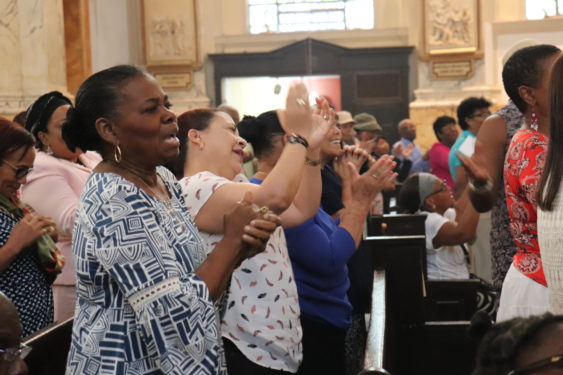 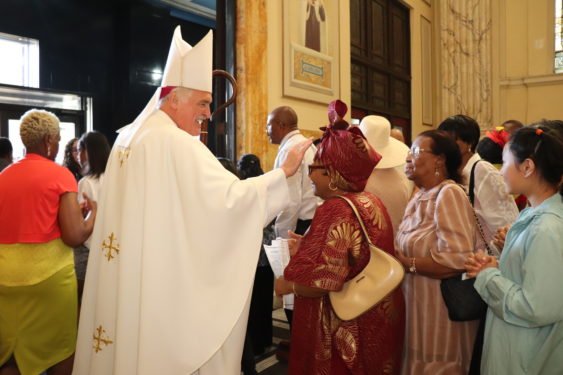 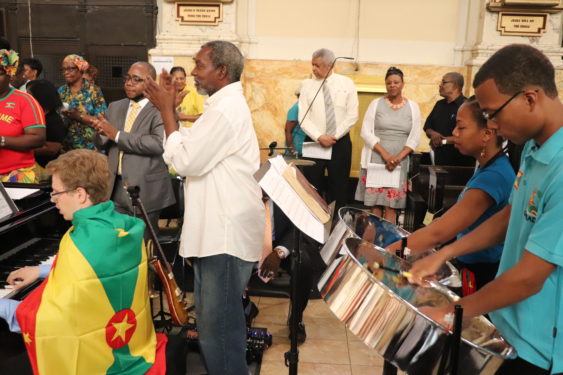 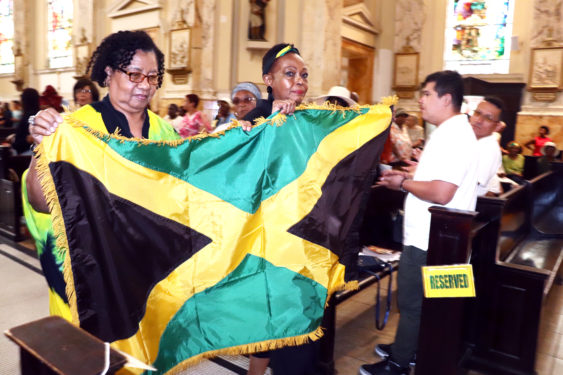 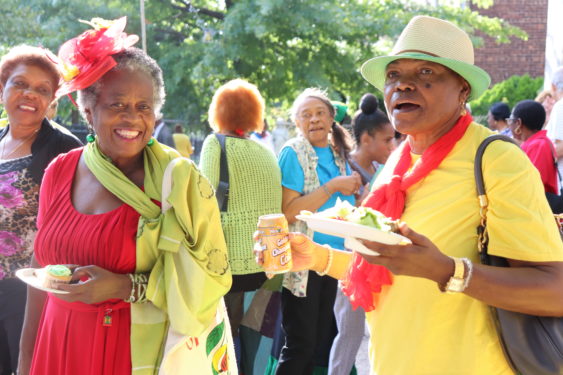 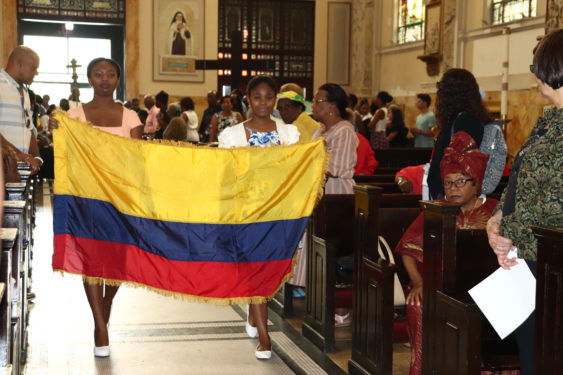 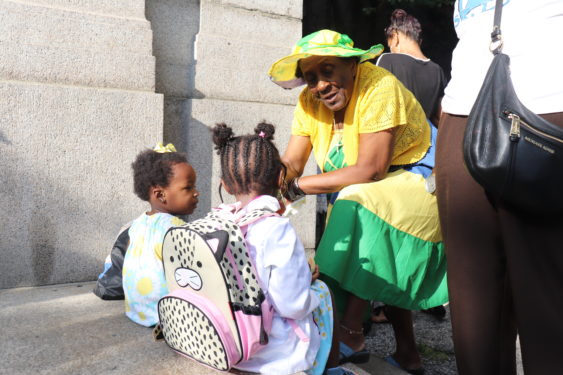 Though the police officers did not allow anyone to go on the street to start the J’Ouvert portion of the West Indian Day Carnival Celebration until 3 a.m. on Monday, Sept. 3, Catholics started celebrating on Sunday afternoon in St. Matthew Church on Eastern Parkway in Crown Heights.

As it had done for years, the diocesan delegation for the parade met for Mass on Monday morning then waited outside St. Matthew Church for the police to direct them to their place in the parade. They donned matching red T-shirts with the inscription “Diocese of Brooklyn” and gave out rosaries and prayer cards, accompanied by a truck blasting out music, in accordance with Carnival tradition.

Donica Alen, a parishioner of Holy Cross, Flatbush, and a member of the planning committee, has marched in the Carnival parade representing her Catholic faith for eight years. Although she said some question her continued involvement, she cannot pass on the opportunity to evangelize.

Participating in the parade is a serious commitment. Catholics meet at St. Matthew Church at 9 a.m. and then walk the long route in what was this year extremely humid heat, warranting heat advisories.

Therefore, Sobner Saint Dic, a member of the planning committee from Holy Family, Flatlands, said the committee wanted to add a calmer aspect to the celebration. They invited politicians, guest priests and Auxiliary Bishop Neil Tiedemann, C.P., to a Mass and picnic on Sunday afternoon, when parking was easier, there was less people on the street and when there would be more time to spend together in fellowship.

The Catholic J’Ouvert started with Mass on Sunday at 2:30 p.m. Bishop Tiedemann was the main celebrant and Father Herman Sharplis, a visiting priest from the island nation of Dominica preached the homily, which focused on an authentic relationship with Christ. Throughout the two-hour Mass people enthusiastically praised God led by the choir, which was accompanied by piano, trumpet, guitar and steel pans.

The music of steel pans is iconic of any J’Ouvert celebration and at St. Matthew Church, it was offered by the sibling team of Coleen and Christopher Chasteau, whose parents immigrated from Granada. The Chestaus participated in this ministry from their infancy, but when their mentor left, the music stopped. Coleen said it was difficult to bring back the ministry with just her and her brother, but the absence of the steel pans during Mass just seemed wrong.

“Although it is hard,” Coleen said, “this is my voice and I want to use it for worship.”

It was the promise of steel pans that brought Pauline Powell, originally from Guyana, to attend a second Mass on Sunday. Having attended her own parish of Holy Cross that morning, she found out about the celebration in St. Matthew.

“The music brings out the spirituality,” she said.

Bishop Tiedemann, having served as the Bishop of Jamaica previous to his current ministry in the Diocese of Brooklyn, said he was thankful to have been invited to the celebration. He misses all the cultural traditions surrounding the faith.

“The faith is the same,” he said. “The cultural expression of faith is different.”

Father Frank Black, the pastor of St. Matthew, said it was important for people to be able to express their heritage. He explained that God asks believers to rejoice in Him.

“If people are not able to show where they come from, then they cannot do what Jesus is asking of them,” he said.

Catholic participation in the Carnival is a beautiful story of perseverance of a group of people who were often discriminated against even in their home countries because of the color of their skin, Father Black said.

“We are still here managing to praise the Lord despite the obstacles of history,” he said.