Catholics from throughout the state of New York met in Albany, March 20, to urge politicians to make responsible decisions.
They joined their bishops for Catholics at the Capitol, a lobby day sponsored by the New York State Catholic Conference. Parishioners and employees of the Diocese of Brooklyn visited their representatives’ offices to speak about issues affecting their districts and to leave reference material.

“They say these are Church issues but these are also human issues,” Charlie Buckley told the man representing him in the state government, Assemblyman Alec Brook-Krasny. “We ask that the budget not be balanced on the backs of those who need it most.”

Funding for Catholic Schools
Buckley asked the assemblyman to vote in favor of funding for Catholic schools, policies that promote those who are imprisoned and funding from non-profit organizations.
Buckley, a parishioner at St. Ephrem church, Dyker Heights, continued on to explain why he found the state’s proposed Reproductive Health Act to be detrimental to society. He said it would not only expand access to abortion during a time when nearly half of all New York City pregnancies result in termination, but it would also cause a silencing effect. People would just stop talking about it because it would be the norm, he said.
“You’ve got a point,” Assemblyman Brook-Krasny responded. “I have to think about it.”
The assemblyman said interactions like this are a crucial element to making the democratic process work.
“When you hear so many different opinions,” he said, “you have to find a compromise among all those opinions – then, you can say you are representing those people.”
Another way Catholics were able to express their opinions was by meeting with politicians’ aides.
Nicole Jean, who works with Catholic Charities Brooklyn and Queens in its Homeless Prevention Program, met with Brittany Robinson, legislative aide to Assemblyman William Scarborough. Robinson took notes on Jean’s argument that the state should make sure people can pay a fair price for rent. She will then meet with Assemblyman Scarborough and relay Jean’s concerns.
“It feels great to be here with fellow Catholics, just to unite… and know that we stand strong on certain issues,” Jean said.
Another issue members of Catholic Charities came to lobby for was the prevention of Medicare cuts that would slice services for people with developmental disabilities.
“With the budget cuts, we will be more of a baby sitting service than a quality care provider,” said Hannah Nelson, a representative from Catholic Charities who works with people with developmental disabilities.
Show of Force
Dennis Poust, director of communications for the conference that sponsors the event, said the day serves as a show of force from Catholics who are politically involved.
“It is very important for politicians to see that there are real people behind what we say,” he said.
However, Poust said New York Catholics must continue to engage their representatives throughout the year in order for the Catholic voice to truly have a say.
“We are not a voice crying out in the wilderness,” said Salvatore Restivo, the state deputy of the New York State Council of the Knights of Columbus. “We are a million voices expressing our faith in very real ways.” 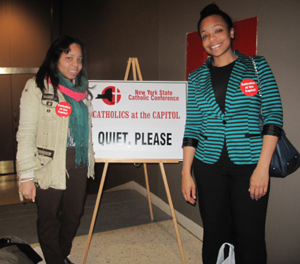