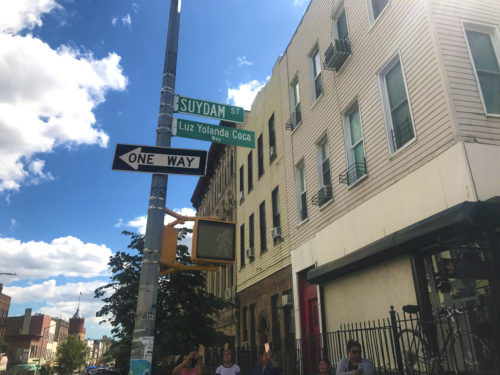 People of Bushwick came together Sept. 9 to elevate the name of one of their own, who died last year, and honor her legacy as a hero of the community.

“She worked for justice and the good of the community,” said Father Hoang Van Nguyen, C.S., parochial vicar at St. Joseph Patron of the Universal Church, before he led those gathered in prayer. “It is an honor for us to be here.”

Coca, an immigrant from the Dominican Republic, was a community leader, known for her work on behalf of tenants and their rights. She died Dec. 9, 2016 after battling ovarian cancer. She was 60.

“In our eyes, she was superwoman,” her daughter Erica Coca said in remarks at the gathering. “To know that this community and this world no longer has this force amongst us, saddens me – but today, as hard as it is – is a day that we celebrate this spectacular woman: the love of our lives, the warrior with the raging fire.”

Yolanda, and her husband, Nonito, immigrated in 1981 and settled in Bushwick. Yolanda described her transition in a speech she delivered during a period of cancer remission.

“It was difficult for me arriving to the United States, not speaking the language, but also because I was raised in a family where we weren’t allowed to have a voice, even more so because we were women.”

Yolanda was one of 15 children. Her father was a farmer and businessman. She praised his work as a community leader, working for the good of his neighbors well into his 90s. She considered her mother to be her role model once describing her being “full of dignity, honesty and generosity.”

Yolanda’s first job in her adopted country was in a fabric factory where she earned $3.35 an hour, but knew that this was not work for her. She studied English and realized that there was a lot of opportunity in her new homeland. In 1982, with the birth of her son, she became a full-time homemaker.

In 1989, she became a victim of street violence when a stray bullet hit her leg while she was waiting to pick her son up from school.

“This tragic experience molded her into the voice of the people,” Erica said. “It was motivation to get her GED and get a degree and pursue opportunity to bring about change.”

In 1992, a representative of ACORN came to the Coca home and asked Yolanda to join the organization. She did so in part because members were offered affordable housing. It was also a way for her to pursue her passion.

“I knew that in this country we have rights and this is what made me decide that I wanted to fight for justice,” Coca said.

In 1997, Coca joined VISTA as a volunteer. Two years later, she worked for them as a housing organizer. In 2004, she obtained a paralegal certificate from Long Island University and then felt a calling to return to work in her own neighborhood.

St. Joseph Patron opened its doors for her and gave her the resources to open the Bushwick Housing Independence project. It is in this position that she did all she could to protect families from being evicted. She fought against illegal practices that forced tenants out to make room for higher rent. She went with people to court, poured through legal paper work and helped find solutions when no one else could see them.

She also inspired those around her volunteer with her, said co-worker Stephanie Espinal.

“But first she asked: are you hungry, do you have a problem, can we help,” Espinal said in a speech at the street co-naming.

Espinal said that no matter the time or place, if she saw a problem she tried to help, saying that faith without action is fruitless.

Maria Serraty met Yolanda 15 years ago when her son was seven. Serraty said she felt alone in the United States, missing her family. She remembers Yolanda inviting her, a perfect stranger, to dinner, showing a human compassion that was able to restore her physically and spiritually.

Margarita Cruz, a fellow parishioner, said her work was no limited to housing issues. She fought wherever she saw a need, even if that meant fighting to keep schools open or brininging more public bathrooms to playground areas.

“She was infectious,” said Deacon Alberto Cruz, who counted Yolanda among his friends. “She taught me not to complain.”

Maria Elena Cruz, the deacon’s daughter, said there was always a smile on Yolanda’s face. She first met the activist when she was in second grade. She would join her mom, Janet Cruz, at work from time to time in St. Joseph Patron. She remembers Yolanda always being kind, even letting her use her office for homework when she was not around.

“Throughout her battle, she continued to work almost full-time, providing services in her office from Monday to Thursday and taking chemo treatment on Fridays,” Erica said.

Her strength clearly came from her faith, Deacon Cruz said. He remembers that even when people would queue up in front of the church to ask for her help in the morning, she would politely let them in but then ask for them to wait, because she had to do the most important thing first.

“‘Before I start my day, I need to talk to Jesus,’ she would say. And then go before the Blessed Sacrament,” Deacon Cruz said.

“Above all things, my mother valued family, faith and unity,” Erica said.