The first Friday in May in the Diocese of Brooklyn always means one thing: the annual Basketball Old-Timers of America dinner and Hall of Fame induction ceremony.

The tradition of bringing together the living legends of New York City basketball continued with the 56th annual dinner held May 1 at Sirico’s Caterers in Dyker Heights.

“It’s wonderful to get everyone here, loving our game and keeping it going,” said Ray Nash, co-chairman of the Old-Timers organization along with Dennis McDermott.

Each year, the Old-Timers honor those who have made a contribution to the great game of basketball on the local level. This year’s honorees included St. John’s University, Jamaica, basketball legends Bob and Ken McIntyre, award-winning sports columnist Peter Vecsey and longtime New York area basketball coach Tom Pecora. 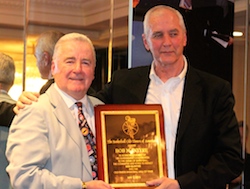 The McIntyre brothers from Queens starred for the Redmen in the mid-1960s. Ken arrived at St. John’s via Bayside H.S., while Bob attended Holy Cross H.S., Flushing.

Bob later played in the ABA for the New Jersey Americans and New York Nets and was a member of Real Madrid’s Euroleague championship in 1967. Ken, who passed away at the age of 63 in 2006, was drafted by the St. Louis Hawks but never played in the NBA. He was elected to the St. John’s Hall of Fame in 2001, and both he and Bob were named members of the school’s All-Century Team.

“I really appreciate what they’re (Old-Timers) doing,” Bob said. “It hurts a little … my brother’s not here, but I’m representing him so it will be all right. I know people from sixth grade that are here tonight who I hadn’t seen in years.” 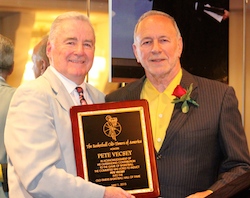 He left the Daily News in 1976 to become an NBA columnist at the New York Post, where he won consecutive Victor Awards in the mid-1990s as the nation’s best sports columnist. He remained at the Post until 2012.

“This is a basketball crowd,” Vecsey said at the dinner. “I’ve made a lot of friends that are here today. Everywhere I turn, there’s history and there’s a story. There are so many different players and people…tremendous camaraderie and relationships that never die.”

Tom Pecora has become one of the faces of college basketball in New York, and it all started during his playing career at Martin Van Buren H.S., Queens Village. He realized he wanted to go into coaching and got his first job as an assistant at Long Island Lutheran H.S., Brookville, L.I. 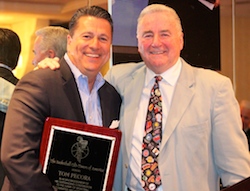 From there, he went on to assistant roles at Nassau Community College, Garden City, L.I., and Farmingdale State College, L.I. He then made the jump to Division I as an assistant to Rollie Massimino at the University of Nevada, Las Vegas.

He returned to the East Coast as Jay Wright’s assistant at Hofstra for a decade before taking over as the team’s head coach. He spent nine seasons at the helm of the Pride, leading the team to five 20-win seasons and three appearances in the annual NIT tournament.

Pecora then took over Fordham University’s, the Bronx, program in 2010 and spent five seasons there. In his career, he’s been a two-time recipient (2006 and 2009) of the Peter A. Carlesimo Award from the Metropolitan Basketball Writers Association as the area’s coach of the year.

Every year, some special guests always pop up at the dinner, and this time around was certainly a real treat for attendees. Legendary St. John’s basketball coach Lou Carnesecca and recently elected Naismith hall of famer Dick Bavetta, a 2014 Old-Timers honoree, were among the notable guests.

“You can’t find a better night for basketball because these people truly love basketball, and this is one night where we get together and tell each other how great we were!” Carnesecca said.

“To be able to come back and share this journey with them…whatever awards or honors along the way are wonderful, but to be back where it all started, that’s the honor for me,” Bavetta said.

The event has been called the best night of basketball in New York City, and it once again fit the bill. While Father Time may have caught up with many of these former players and coaches, the dinner always proves the same point year after year: These Old-Timers can definitely still talk a good game of hoops!