All you need is Just a Touch of Faith, that was the message at this year’s Brooklyn Diocese Vicariate of Black Catholic Concerns Praise Prayer Brunch.

The event made its first appearance in Brooklyn this year, having been held in Queens in previous years. Father Maurice Nutt, C.Ss.R., a well-known speaker from Xavier University, Louisiana, came to St. Thomas Aquinas, Flatlands, to give the main address.

“Faith is amazing stuff,” he told his audience of mostly black Catholics from throughout the City of New York. “The ground is always level at Jesus’ feet.”

The Just a Touch of Faith theme came from the Gospel of Mark 5:21-43. That’s the story of when Jesus was on His way to raise Jairus’ daughter from the dead and a woman, afflicted with hemorrhages, snuck up behind Jesus and touched the hem of His garment.

“She stole a grace from Jesus!” Father Nutt said.

He said that this woman, who was not a churchgoer because she was kicked out of church due to her affliction, who wasted her life’s savings on cures that made her worse, had such strong belief that grace flowed from Jesus. And even though people were crowding around the Son of Man, pushing and shoving, Christ turned around and asked a seemingly absurd question: “Who has touched my clothes?” 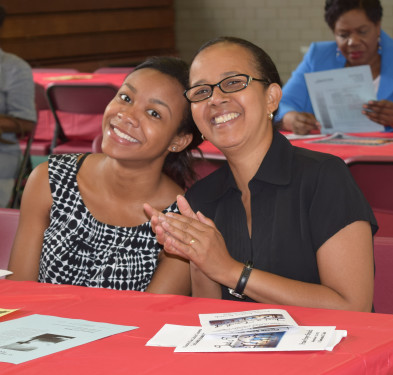 When the woman explained herself, Jesus answered: “Daughter, your faith has saved you. Go in peace and be cured of your affliction.”

Father Nutt said he has seen this scenario play out in modern times. He said people come to church and sometimes feel worse than when they came in. That is like the crowd of people around Jesus. They all came and were in the presence of the True God, but it was the woman in her deep faith that received the miracle. He said it is not enough to be in presence of God, one must be receptive.

However, he warned not to use conviction in faith as an excuse to forget one’s role in relation to God.

Some people think “that praying is the art of bossing God around,” he said. “We get into ‘I got this’ mode and we want to boss God around.”

Father Nutt reminded those present that God answers when the time is best, in the manner best fit.

Ruth Smart-Baez said this message struck home for her. She says she sees so many people in desperate need of God’s grace. The keynote has given her a yearning to help these people understand that all they need to do is touch Jesus’ hem. 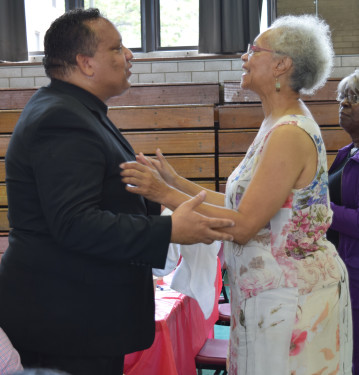 Norma Francois said the address helped bring back her outlook in life. She said she is already so thankful to the many miracles God has given her in her life, such as recently bringing down swelling in her feet just in time for First Saturday Mass. Therefore she said she took Father Nutt’s message of trust in God to heart. She plans to bring this attitude to her professional life. She has been eyeing a new space for her office, but she said she is going to be grateful for whatever space she will end up with because God’s plans are always better.

“It doesn’t have to do with what you want, but what God gives you,” she said.

Mona Fish, from St. Thomas Aquinas parish, came to the event because she wanted to support her parish’s efforts.

“It’s good to spend time with my parish family,” she said, adding, “I’m still looking for a hem to touch.”

The People of Praise band played songs of worship at the brunch as people prayed and ate.

Roger St. Louis, the band’s guitarist, told attendees that once one starts to worship, it snowballs.

“It’s kind of an addiction,” he said. “Praise becomes the foundation.”

He also reminded those present to be Christ for others: “Remember that your smile is sometimes what people depend on.”

Retired Auxiliary Bishop Guy Sansaricq came to the event to support the works of the vicariate, specifically the Youth Leadership Ambassador Program. The brunch was held as a fundraiser for the Ambassador Program. Among other planned events this year, ambassadors will go to Jamaica on a service trip.

At the end of the event, Father Nutt invited all to a Black Lives Matter symposium, Nov. 6-7, at Xavier University. For information on the symposium, call 504-273-7300.