This site uses cookies to store information on your computer. By using this site, you consent to the placement and use of these cookies. Read our Privacy Policy to learn more. ACCEPT
Skip to content
Bishop Nicholas DiMarzio celebrates the demisemiseptcentennial of the Assumption of the Blessed Virgin Mary Church. (Photos: Melissa Enaje)

Archived photos of distant memories in the church's history.

Parishioners and guests enjoy the reception.

Theatrical plays are one part of the church's vibrant history.

Longtime parishioner Maryanne Killeen, right, said “It’s really nice to know that these are the same pews that my grandparents sat in. “My parents were married here and all of us were baptized here, so you really feel that sense of connection being here.”

The young and the old mix during the 175th celebration festivities.

Sitting in the same wooden church pew where she sat with her family as a child growing up in Brooklyn Heights in the late 1950s, Maryanne Killeen and more than 100 parishioners and guests attended the Jubilee Mass celebrating the 175th anniversary of the founding of the parish of the Assumption of the Blessed Virgin Mary.

“It’s really nice to know that these are the same pews that my grandparents sat in,” said Killeen. “My parents were married here and all of us were baptized here, so you really feel that sense of connection being here.”

Bishop Nicholas DiMarzio was the main celebrant of the liturgy June 10 with priests from the Brooklyn Oratory of St. Philip Neri – the order that has provided pastoral care for the parish since 2016.

“It’s a historical day to have a parish that is in existence for 175 years,” said Bishop DiMarzio. “That is a wonderful thing to have in the diocese, so we’re very proud of the parish and we hope again as the years go on, they keep outreaching to the new people that come in the area.”

Killeen’s fondest memories about the parish were more than just the St. Patrick’s dance held in Assumption Hall or of her brother selling The Tablet for 10 cents a copy, but it was the sense of belonging to a tight-knight community that embraced her and her family. Holding back tears, she recalled moments her mother shared with the Assumption parish before she passed away two years ago.

“Every Monday she would come to the church to count the collection,” she said with nostalgia on her face. “She made the coffee for the coffee hour here and she was honored twice as the Woman of the Year – first when she was 70 and then when she was almost 90 – and that was a really very nice memory.”

Yet before significant memories like the ones the Killeen family and countless other families had, before thousands of sacraments could be performed, the story behind the Assumption of the Blessed Virgin Mary was not void of trial and errors. 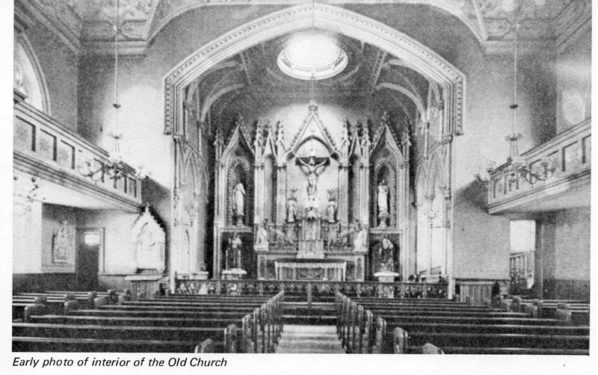 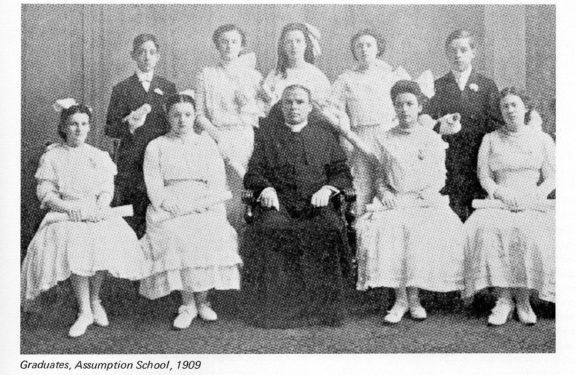 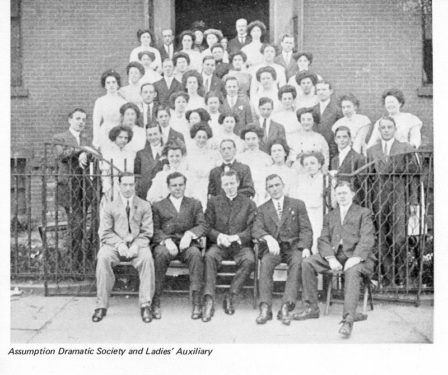 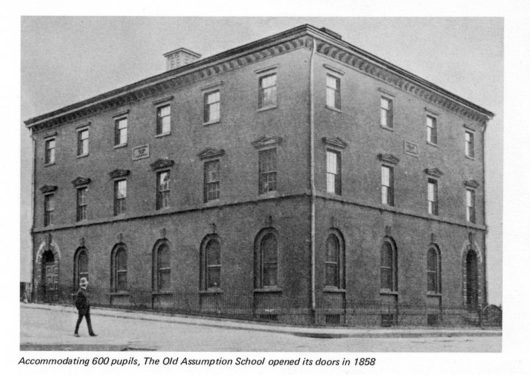 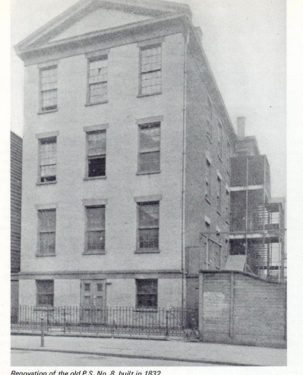 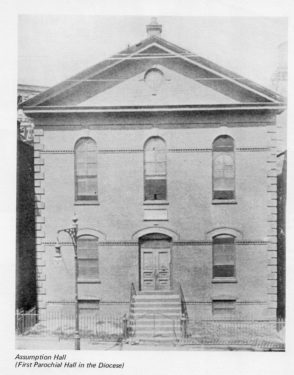 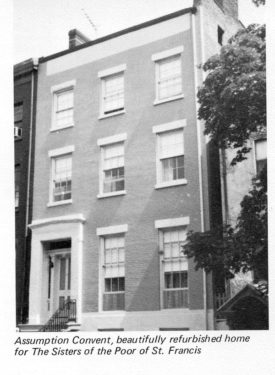 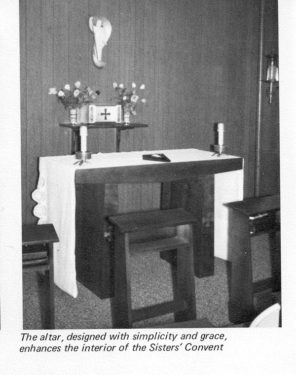 In Brooklyn’s oldest residential community and the seed from which the original city grew, the third Catholic Church in the borough was dedicated in 1842 by the late Bishop Hughes to the Blessed Virgin Mary under the title of Assumption.

Originally located at York and Jay Streets, the parish’s cornerstone was laid Oct. 27, 1831. It was nicknamed “Farnan’s Church” after Father John Farnan, the first pastor of St. James Church, downtown Brooklyn, whose initiatives helped with the beginning stages of Assumption. But for its first two years of existence, it was barely used. Father Farnan was unable to pay back the loan used to build the church and in the fall of 1833, a New York merchant by the name of Stephen Whitney took back ownership of the church.

It wasn’t until seven years later in 1840, when Bishop John Hughes purchased the building again and entrusted the church to its first pastor, Father David W. Bacon, that Assumption of the Blessed Virgin Mary was blessed and the rest was divine history.

At that time, there were five Protestant churches in Brooklyn Heights. Assumption was dedicated in 1842 as the area’s first Catholic Church.

Under Father Bacon’s leadership, the parish offered free school in the church vestries. Not too long after, he was named bishop of the Diocese of Portland, Maine.

But the church was still in good hands because during Father Bacon’s tenure, Father William Keegan was involved as the church’s first assistant pastor. So in 1853, when the Brooklyn diocese was created, Father Keegan became the second pastor of Assumption.

The church was called “Father Keegan’s Church.” Assumption School was built at the corner of Pearl and York Streets. Classes were taught by a lay faculty until Father Keegan called upon the Sisters of Charity to come to the school by 1868. Students were taught religion, English and even life skills. The Franciscan Brothers became a part of its history when they took responsibility of the boys’ department of the school.

Tom Killeen was not only baptized at the church, sold The Tablet as a young boy, but also attended Assumption School in the late 1950s. He remembered attending Mass with the nuns. He said they used metal clickers and once the students heard the familiar click sound echoing in the church aisles, it would dictate whether they sit, stand, kneel or even turn to the side.

“My class had six boys and 13 girls and two classes would be taught by the same teacher in the same room and it was never disruptive,” he said. “From that school we had people go on to great high schools, great colleges so the education there was very good.”

Tom’s classmate and friend to this day, Fred Podorf, attended the school, 1955 to 1962, and was part of the last graduating class.

“Assumption Church and Assumption School was where it all began for me,” Podorf said. “My education, my profound faith in God still remains and my life-long relationships still prevail. It was a time where learning, faith, friendship, fraternity, innocence, solidarity and affection co-existed. In all honesty, if it were not for the Assumption Sisters of Charity, the Assumption priests and my parents and their continual emphasis on behaving properly, I don’t believe I would be the person I am today.”

Since the school’s closing in 1962, the church has had eight pastors.

The parishioners and its pastors held parish potluck suppers, Bible study groups and under Msgr. Joseph Funaro in 1989, the parish raised enough money to fix its stained-glass windows and installed a handicap accessible bathroom, sound system and even renovated the church’s lower hall. It was the medicine needed just in time for its 150th anniversary in 1992.

With a dwindling population and a shortage of clergy, the parish eventually came under the administration of St. Charles Borromeo. Father Edward Doran was an administrator at Assumption in 2015 before the Oratory Fathers assumed responsibility.

“I think the things that I miss the most are the involvement of the congregation in the church,” Father Doran said. “It’s a smaller congregation but they’re very vibrant, they’re deeply committed to their church and love it a lot. My primary hope is that they have another 175 years and they continue to grow and reach out to young people.”

After Mass, at the reception in the lower church hall was the very depiction of such a vision. Young children were running around the wooden floor playing tag. It creaked with every step as if the echoes could vibrate the sounds of the hall’s younger years filled with parties and celebrations of life. Older parishioners were seated in metal chairs, crowded in a circle taking in distant memories and gathering new ones.

Valerie Latimer was engulfed in the church’s old photo albums and trinkets laid out across a couple tables in the back of the hall. Even though she’s a parishioner at nearby St. James Cathedral, she was taken back by not only the beauty of the church, but by a familiar face in the vintage photo collection.

“I see Bishop Daily,” Latimer said while flipping through the anniversary album. “He shared his time when he was alive with them and I know his spirit is here today. I just know he’s here today.”

Assumption became part of the Oratory of St. Philip Neri in 2016. Father Joel M. Warden, C.O., serves as administrator. He reflected on how he has come to understand his new flock and neighborhood.

“It’s an amazing kind of mix, but you have to provide some sort of home, some sort of spirituality, some sort of sense of belonging in order to bridge those gaps. That’s certainly what we are trying to do now in our first year and four months of serving the parish.”

The Pastors of Assumption BVM