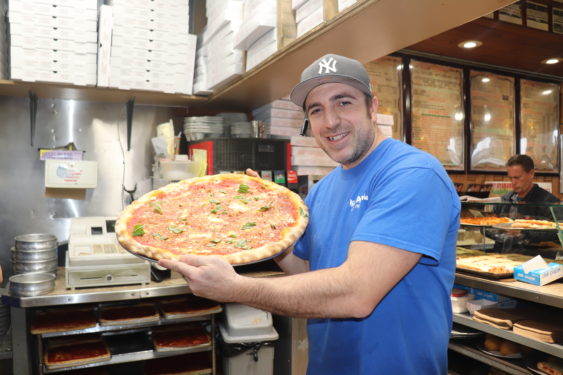 Keeping to his Catholic values, the owner and pizzaiolo of Victoria Pizzeria, Gerritsen Beach, expanded his meatless menu on Fridays this Lent, as is his custom every year.

“It’s good to remind people that the Catholic faith is still around,” Salvatore Genova said.

Although the pizzeria offers varieties of meatless options throughout the year, Genova makes it a point to print a special Lenten menu and add some unexpected Lenten treats. The best sellers are the buffalo calamari and clam pizzas. The employees have trouble making it quickly enough as a steady stream of customers buy off the slices.

“I create – that’s what I like doing,” Genova said of his pizza-making style. “Just creating good food makes me happy because it makes other people happy.”

Genova is a first-generation American of Italian descent. His family comes from Palermo, Sicily, and they still keep a house there.

Young Salvatore started his pizzaiolo career at just nine-years-old in his parents’ pizzeria. He loved helping out in the

family business and became enthralled in the pizza making. He also loves interacting with customers and the sense of community that forms around small businesses.

Now he has a pizzeria to call his own. His father still runs Tommy’s Pizza in Howard Beach, where the family lives.

Two years ago, the Renzetti family wanted to sell their pizza shop to someone who would do business right. They had run Victoria’s Pizzeria for generations and wanted to make sure their legacy would not be tarnished. People from all over would come to try the square-Sicilian pizza made by this Neapolitan family.

That’s where Genova came in. He took over the reigns and made sure to keep the staples that made Victoria Pizzeria successful. He also added a fun flare of pizza varieties.

Part of his inspiration comes from what he sees when he visits Italy. He likes to incorporate what he learns into his own style. It’s a way for him to share his culture with his customers. He does this in a number of ways including making his own cheese on certain pizzas, carefully selecting the spices for each kind of pie and pairing the perfect toppings for different tastes.

Genova is confident in his food and his business style because he does not rely only on his own strength. He has the most

powerful ally with whom he confers and pays homage to all the time, especially on Sundays.

“Going to church every Sunday makes me make better decisions,” said the businessman who is a parishioner of St. Helen, Howard Beach. “It gives you more of a confidence knowing that you have God on your side.”

That’s how he came up with his custom of offering a Lenten menu. He did it for years without flare because he just thought it was the right thing to do. This year, he simply posted a picture of a Lenten pie he was especially happy with on social media. The word spread quickly and his Lenten work started bearing more dough than he ever anticipated.