PROSPECT HEIGHTS — When Bishop Robert Brennan was a student at St. John’s University in the 1980s, he remembers attending daily Mass at the small Our Lady of Lourdes chapel tucked away on-campus. It was something vital to his early formation and eventual decision to join the seminary. 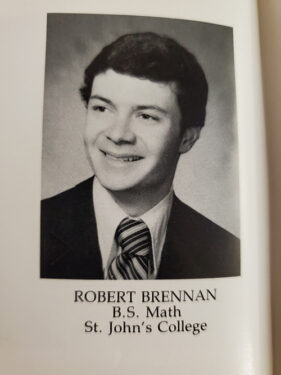 Of course, the university has changed in the decades since. Our Lady of Lourdes was decommissioned in 2004 when the university built its free-standing St. Thomas More Church. Bishop Brennan’s affinity for the university, however, has never wavered, which is why he requested to celebrate his first Sunday Mass as prelate of the Diocese of Brooklyn at his alma mater.

Bishop Brennan will celebrate the students’ Mass at St. Thomas More Church at 5:30 p.m. on Sunday, Dec. 5 — five days after his installation as the Diocese of Brooklyn’s eighth bishop.

“It’s pretty amazing,” Bishop Brennan said of celebrating the upcoming Mass. “I appreciate all that I had learned there, and I’m proud to be going back to St. John’s.”

Bishop Brennan is open about the impact St. John’s had on his journey into the priesthood. As he tells it, he had “pretty solid” knowledge that he wanted to be a priest by the time he graduated high school. But he decided he still wanted a university experience, so the Bronx native and lifelong Long Islander decided to enroll at St. John’s to study mathematics and computer science. 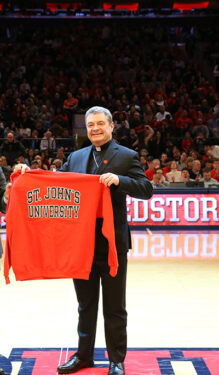 In his time at St. John’s, in addition to daily Mass, he credits the Vicententians at the university with preparing him to go into seminary, plus a “good circle of friends” on campus who were also strong in their practice of the faith.

“There was an awful lot of support,” Bishop Brennan said.

Brian Brown, St. John’s University spokesperson, said the university is “proud and excited to have one of our own” leading the Diocese of Brooklyn — especially Bishop Brennan, who Browne said is a “familiar face” on campus through his ministry as a priest and bishop. He also served on the board for the Institute for Catholic Schools at the university.

“Over a century and a half ago, Bishop John Loughlin — the first Bishop of Brooklyn — asked the Vincentians to establish a school for immigrants and their children to get a quality, affordable, Catholic education,” Browne said in a statement. “How fitting that a graduate of that same school is now leading the Diocese of Brooklyn where the story of St. John’s University first began.”

He noted that, even if he were not an alumnus, he would still make campus ministry a priority for his support. It was a focus of his work in the Diocese of Columbus, where he worked closely with Ohio State University.

“I know that Sunday evening Mass has become really the heart of the practice of faith there on the campus,” Bishop Brennan said. “I understand that they get a good crowd there and that it’s very important to student life, which I’m glad to see happening and want to encourage it.”