WINDSOR TERRACE — Anthropologist Tom Riley did not understand why his grandmother, in the mid 1950s, resisted an interview with a priest working on a biography of the family’s famous ancestor, Bishop James Augustine Healy.

Bishop Healy — the eldest brother of Riley’s great-grandmother, Martha — was born into slavery in Jones County, Georgia. He moved north for education as a young boy and later became a priest. In 1875 he was consecrated as the second bishop for the Diocese of Portland, Maine.

But Healy is also known as the first bishop of African American heritage in the U.S.

Healy, son of an Irish cotton planter and a multiracial slave, also made history in 1854 as the first ordained priest in the United States with African heritage. However, historians note that, because Healy “passed for white,”

Augustus Tolton was the first “publicly known” U.S. black priest with his ordination in 1886.

All but one of Healy’s nine siblings survived infancy; his five brothers and three sisters all received their educations in the North. Three became priests, two were nuns, one entered the hardware business, and another was a ship captain — accomplishments of the youngest, Eugene, are not documented.

“They were an amazing crew,” Riley said. “But my grandmother was seriously passing as white, and it really bothered me that she didn’t recognize her African American heritage.”

Riley is a retired anthropology professor for North Dakota State University in Fargo, where he still lives. He was a boy when the biographer, Father Albert Foley, interviewed his grandmother at her home in Waltham, Massachusetts. Father Foley wrote the 1956 book, “Bishop Healy: Beloved Outcaste; The Story of a Great Priest Whose Life Has Become a Legend.”

But Riley said his grandmother was reluctant to discuss the family’s African heritage. Now he understands why. The Civil Rights Movement was only about a year old, Jim Crow laws had yet to dissolve in the South, and African Americans also faced racism in the North. This turmoil, Riley said, stoked his grandmother’s resolve to pass as white.

“The older I get, the more I see what she was facing,” he added. “When I look at what it was like in the 40s and 50s, I don’t blame her.” But Riley’s ancestors had troubles unique for their era. “We know a lot,” Riley said, “but so little.”

A ‘One Drop’ Rule

Michael Morris Healy, the family’s patriarch, came to North America in 1815 as a 19 year-old Irish soldier in the British army.

He deployed to Canada, but left the army and journeyed to Georgia, where he had relatives. Healy participated in a government lottery system that awarded land taken from Native American tribes, Riley said. The Irishman sold the parcels and used the proceeds to develop a 1,500-acre cotton plantation along the Ocmulgee River near Macon. He bought slaves to work the land, including Eliza, who would be the mother of his 10 children. James came first. His brothers were Patrick, Hugh, Sherwood, Michael, and Eugene. His sisters were named Martha, Josephine, and Eliza.

Healy’s progeny was no secret, Riley said. He paraphrased a passage from an early Jones County history book that described Healy as “an odd Irishman who essentially lived with his slaves and had 10 children by one who he considered his wife.”

The anthropologist added that Healy perhaps didn’t care what others thought. As an Irishman, he was considered a second-class citizen in Great Britain. As an immigrant, he drew the disdain of “nativist” American citizens. Therefore, he might have had a rebellious attitude toward upper-class people, Riley suggested.

In his will, Healy called Eliza his “trusty woman,” but laws and mores prevented their marriage. Consequently, despite their bond, she remained a slave. Their children faced similar futures. The “one-drop” law stated that people with just one African ancestor were still considered black, even if they appeared to be white.

Riley said a plantation owner could release a slave, but only with approval from Georgia’s state government, which kept tight control on how many people could go free.

Healy knew that even if he could win freedom for some of his children, others, if not most, would remain slaves, Riley said. “Georgia law stuck him in a bizarre situation,” Riley said. “If he died, there was no way of distancing his children from being sold … That’s why the kids had to go north.”

Healy also knew the children could never return to Georgia because The Fugitive Slave Act would have forced them back into bondage, Riley said. James left home first, at age 7, and other siblings followed. Their mother never saw any of them again.

“You can imagine she was heartbroken,” said Barbara Miles, archivist for the Diocese of Portland. Miles organizes and preserves diocese records, including those about the Healy family. She called their saga a “story of absolute love” — one in which the mother loved her children enough to give them away. “Eliza lost all of her children to freedom,” Miles said.

‘Then I was nothing; now I am Catholic’

The boys initially went to a Quaker school in Flushing, Queens, Riley said. “But,” he added, “that didn’t work because there was a fair amount of racism. People didn’t appreciate their African heritage.”

Later, on one of his trips north, the father met Bishop John Bernard Fitzpatrick of Boston, who urged Healy to transfer his sons to the new Jesuit College of the Holy Cross. The campus in Worcester, Massachusetts, also had schooling for children.

Each of the brothers was baptized there and excelled in academics. James, in a diary entry, compared his life in the North to Georgia.

“Then,” he wrote, “I was nothing; now I am Catholic.” In 1854 he could introduce himself as Father Healy, having been ordained at the Cathedral of Notre Dame in Paris, France. Before that, he was valedictorian of Holy Cross’s first graduating class in 1849. His subsequent formation continued at the Sulpician Seminary in Montreal, Quebec, and Sulpician Seminary in Paris. His parents, meanwhile, died within a few months of each other in 1850 while he was in seminary. Riley said he did not know the causes of death.

Brother Hugh, a hardware dealer in New York City, took on the risky task of returning to Georgia to rescue the remaining siblings — sisters Josephine and Eliza, and the youngest boy, Eugene. The siblings reunited in Boston, and James became the head of the family.

Martha, Eliza, and Josephine entered a convent school, the Congregation of Notre Dame in Montreal. Only Martha chose not to be a nun; she married in 1865 and settled with her family in Waltham. Patrick, also a priest, was the second president of Georgetown University and is the namesake of the flagship building, Healy Hall. Sherwood followed James to Sulpician Seminary in Paris. After his ordination, he earned a doctorate in canon law in Rome.

There is no record of Eugene accomplishing anything as noteworthy as his siblings. Michael, however, earned a stern officer’s reputation in what would become the U.S. Coast Guard, patrolling rough seas along Alaska’s rugged shorelines. 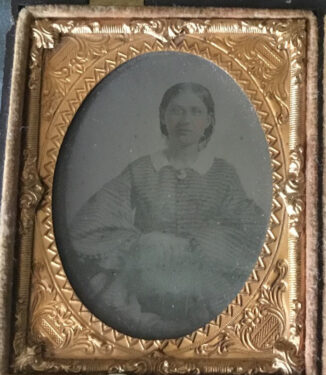 After his ordination, Father James Augustine Healy returned to Boston, where Bishop Fitzpatrick gave him several assignments, including the pastor of St. James parish, the largest at that time in Boston. His reputation was that of an efficient administrator and loving pastor of his congregations.

Still, a few people, including a fellow priest, knew about his black heritage and held it against him.

On one assignment, Father James Healy journeyed deep into the Maine backcountry, ministering to settlers and people of the Abenaki tribe. Another priest objected to James because of his race, Riley said.

But in 1875, the newly consecrated Bishop James Augustine Healy became that priest’s new boss, Riley said with a chuckle.