Dozens of faithful attended a Mass for Peace and Justice at St. Josaphat Church, Bayside, on Jan. 22. The Mass was offered in reparation for the nearly 56 million babies aborted in the United States since the Supreme Court legalized abortion on Jan. 22, 1973.

“The right to life is guaranteed,” said Florence Maloney, longtime parishioner and organizer of the Mass. “And there is no question about when life begins now … We are way overdue for that Supreme Court decision to be overturned and corrected.”

Maloney chairs the Joint Parish Respect Life Committee, a group of nearly 20 parishes formed in the late 1990s to defend the sanctity of life.

For around 13 years, the committee has organized an evening Mass at St. Josaphat for those who could not go to the March for Life in Washington.

This year, more people joined in because Winter Storm Jonas – which affected around 74 million Americans from Nebraska to New York City last week – was set to hit the nation’s capital hours into the march.

Due to the impending storm, DeSales Media Group and the School of Evangelization had to cancel the buses they had scheduled for Washington. Other buses around the diocese also cancelled the trip due to safety concerns.

When his bus cancelled, Kevin Lyons, a parishioner of St. Anastasia Church, Douglaston, asked his wife Cindy to join him at the Mass at St. Josaphat to pray for an end of the “silent epidemic” of abortion.

“I came to bear witness to the unborn and to the defenseless,” he said. “They are members of the Church too.”

The Lyons offered the Mass for “the children and the unborn babies and for the moms.”

The week before, they had walked toward a Planned Parenthood facility while praying the rosary with the Helper’s of God Precious Infants.

In his Jan. 22 homily, Father Andrzej Klocek, St. Josaphat pastor, talked about the popular children’s tale in which a king was convinced to buy clothes made out of material that was “invisible to anyone who is unfit for office or ‘hopelessly stupid.’” The king received ovations on the “fine fabric” until a child cried out that the king was not wearing clothes. Father Klocek pointed out that even when abortion is called by different names nowadays, the Church – like that child – should not be afraid to “go beyond the deception and call out the uncomfortable truth.”

At Blessed Virgin Mary Help of Christians, Woodside, activities started with a morning Mass in honor and defense of life, followed by praying the rosary in front of a local abortion clinic, watching the simulcast of the March for Life, watching pro-life movies and dedicating a Holy Hour for life in the church.

“We need to speak up for the voiceless,” said Cathy Donohoe, a parishioner of Holy Family, Flushing, and board president of The Bridge to Life, a crisis pregnancy center in Queens.

Though she was disappointed that her bus didn’t make the trip this year, Donohoe, who has been going to the March since 1974, said she was inspired by Father Klocek’s words.

St. Anastasia parishioner Pamela Menera, a member of Rachel’s Helpers, a post-abortion healing ministry, agreed saying that those who know the truth about abortion must ask the Holy Spirit to give them the strength “to fight the power of evil” and denounced the lack of respect for human life.

Despite the storm, approximately 50,000 people gathered in Washington Jan. 22 to protest Roe v. Wade and to pray for the protection of all human life from conception until natural death.

Michael Germano, director of campus ministry at Archbishop Molloy H.S., Briarwood, drove to Washington with his friend, Meera Sukhdeo from St. Benedict Joseph Labre Church, Richmond Hill. He said that even though crowds were smaller because of the impending storm, most states were represented by pilgrims braving the winter weather.

Peter and Paulette Kraljic, parishioners of Immaculate Conception Church, Astoria, were among 40 faithful who managed to take a bus to Washington. Peter said after the group assessed the situation on Friday morning, they convinced the bus company to take them to the march.

The bus was mostly filled with pro-life veterans of different ages, including a woman who has been participating for 43 years. They marched to give witness to the right to life before spending six hours on their way back to Queens. While on the bus the parishioners – young and old – prayed the rosary and the Divine Mercy chaplet.

For Germano, Jan. 22 is important because it was also the day his mother, Mary, passed away. She was an avid pro-lifer, which inspired him to get more involved in the Right to Life cause. He’s been going to the March for Life for nearly 10 years.

He was glad to hear the passionate speeches denouncing the evil of abortion and to have the opportunity to “pray for the ending of this atrocity.” Living in a world where people don’t understand why people are passionate about ending abortion, he said, it was reaffirming to be “surrounded by people who get it.”

Seminarian Brendon Harfmann, from Cathedral Seminary House of Formation, Douglaston, was part of a group that went to Washington to be examples for the respect for all human life. The men joined about 500 seminarians and thousands of young people for the Opening Mass of the National Vigil for Life on Jan. 21. Also present were Brooklyn seminarians from St. Joseph’s Seminary in Dunwoodie; SS. Cyril and Methodius Seminary, Orchard Lake, Mich.; and St. Charles Borromeo Seminary, Philadelphia, Pa.

“It’s an incredible feeling. You can see the (Washington) Basilica praying” for the respect of life, Harfmann said. “It inspires us and it inspires young people to see how vocations are really lived out.”

Harfmann was particularly inspired by the words of New York Cardinal Timothy Dolan who mentioned the example of Holy Child Jesus Church, Richmond Hill, which cared for a newborn baby left in a manger at the church. (See In Pro-Life Homily, Cardinal Cites Queens Priest, Parish and To Richmond Hill Parish, A Child Is Born.)

“To hear that the Church needs parishes, priests and committed faithful like those in Queens … His words struck home, because of the story, but because I know the parish, I know Father Chris Heanue,” Harfmann said. “It showed that (despite the weather keeping some parishioners from coming to the march), Brooklyn was very much present at the March for Life.”

Because of the blizzard warning, the seminarians headed back to New York early on Friday.

The Brooklyn Diocese was also present in prayer. Margarita Sanchez, who is part of the youth ministry group at St. Andrew Avellino Church, Flushing, went to Mass to pray for all the unborn children’s souls.

“I think that every life is worth trying to save so I felt like this was the least that I can do,” she said. “The most important thing is to understand that the Catholic Church is here, the community is available, and to seek all options (instead of abortion) through God who is the most powerful.”

As Maloney watched the EWTN coverage of the March for Life in Washington, she was heartened to see so many young people from all over the country who went despite the weather.

“With the help of God and the intercession of the Blessed Mother, we will bring about the restoration of the right to life from the womb to the tomb,” Maloney said. 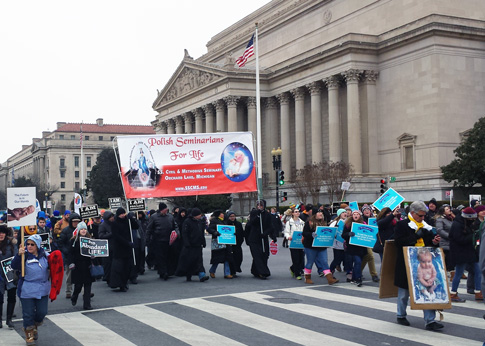 Photos from the March for Life in Washington D.C. (Courtesy of Peter Kraljic) 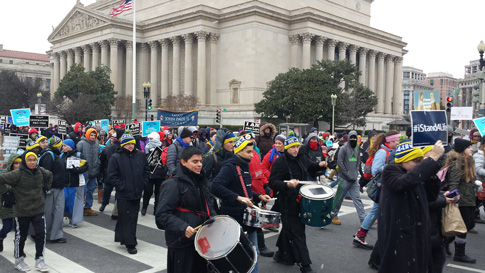 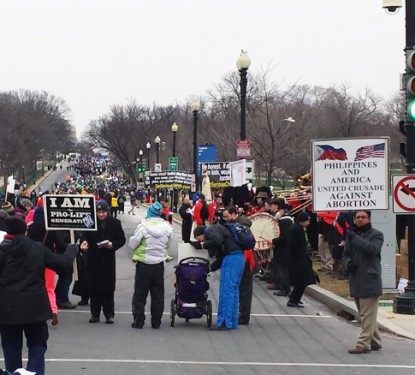 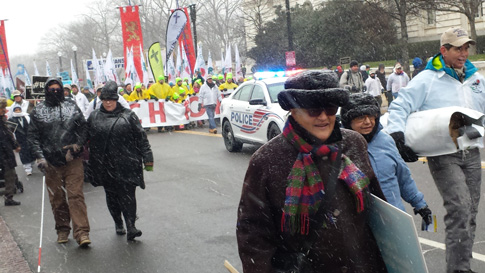 Parishioners pray the rosary before the Mass for Peace and Justice at St. Josaphat Church, Bayside, on Jan. 22. 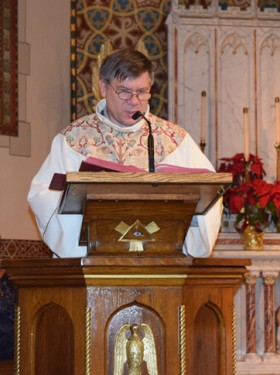 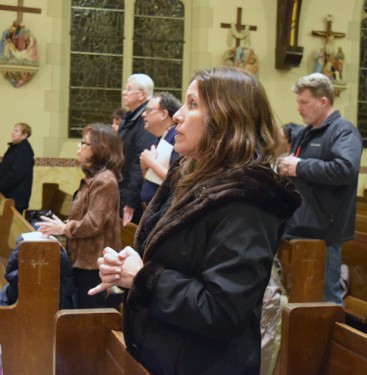 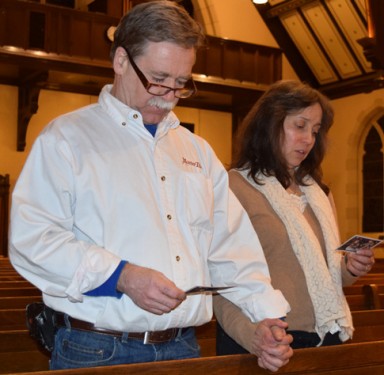