INDIANAPOLIS — Young people were able to encounter the church in a big way as they prayed with nearly 20,000 teens from more than 100 dioceses at the National Catholic Youth Conference (NCYC).

This year’s theme was “Blessed, Broken and Given” and allowed attendees to journey through the Road to Emmaus story.

Leading us on the journey were emcees Katie Prejean McGrady and Father Augustine Torres, C.F.R.

After the hustle and bustle of the registration process and checking into hotels, the teens descended onto Lucas Oil Stadium — usually home to the Indianapolis Colts, but for one weekend, the stadium became holy ground. After an opening session of praise and worship music, we settled in for evening prayer, led by Bishop Nelson Perez, the bishop from the Diocese of Cleveland. 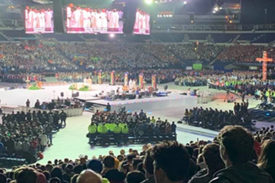 Father Torres led us in catechesis for adoration, explaining its importance and how we can enter into this as an encounter with Jesus. Young people were so moved during their experience that many approached the stage to kneel before Jesus in the Blessed Sacrament.

Logan, a teen from St. Sebastian’s said, “The adoration impacted me because before adoration, my heart was hurt and it carried many burdens, but while I prayed, I felt the peace of the Lord enter my soul and I felt as though He was with me.”

The morning general session was given by a survivor of the Rwandan Genocide, Immaculée Ilibagiza. She spoke about her struggles in Rwanda as well as her learning how to forgive those who caused such pain in her life. Sally, a teen from St. Dominic’s, said, “The talk by Immaculée was a great example of how God reaches out to His children, especially when they are in need.” 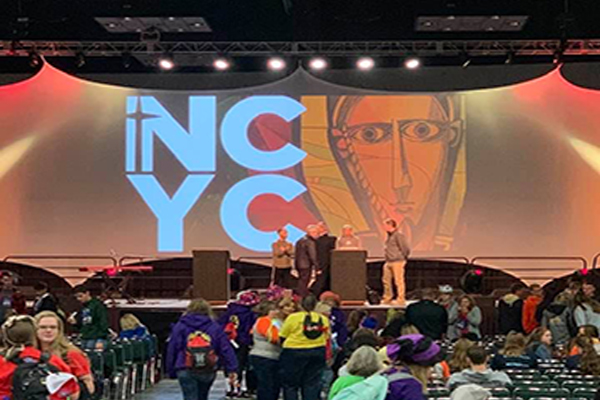 The final keynote for the weekend was given by Sister Bethany Madonna, S.V. As a Sister of Life serving in New York City, she spoke about her ministry working for the pro-life movement. Closing Mass was celebrated by Archbishop Charles Thompson from the Archdiocese of Indianapolis, on the eve of the feast of Christ the King.

Morisi is the director of the Youth and Young Adult Formation in the Diocese of Brooklyn.