Seventh in a series

As I re-read Cardinal Walter Kasper’s Pope Francis’ Revolution of Tenderness and Love (New York: Paulist Press, 2015, pp. 117, $16.95) in order to write this series of columns about Pope Francis’ vision for the Church, I have become aware that my reading has become what for most of my life I referred to as “spiritual reading.” 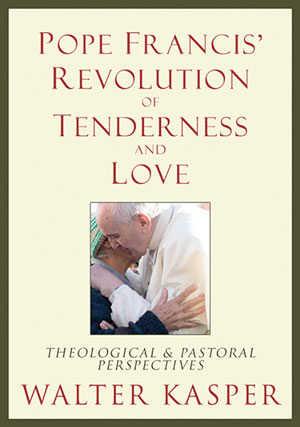 Re-reading the cardinal’s book makes me feel as though I am on retreat or making days of recollection. I can only describe the book in superlatives. I feel as though, through Cardinal Kasper’s insights and comments, I have entered into Pope Francis’ mind. I plan to encourage anyone, Catholic or other, who wants to understand more deeply what the pope’s vision of the Church is, to read this book.

Cardinal Kasper titles the sixth chapter of his book: “People of God Ecclesiology Understood Concretely.” The chapter illustrates how Pope Francis’ vision is in complete accord with what the Second Vatican Council and other pontiffs have taught, but also how Pope Francis’ approach and emphasis are his own.

Cardinal Kasper makes the important point that the Church does not create truth out of its own power or resources. Rather, the Church is able to teach truth because she listens to the Word of God, especially in the Eucharist. The cardinal quotes from the Holy Father’s marvelous apostolic exhortation “Evangelii gaudium” (EG):

“All evangelization is based on that word, listened to, meditated upon, lived, celebrated and witnessed to…The church does not evangelize unless she constantly lets herself be evangelized. It is indispensable that the word of God be ever more fully at the heart of every ecclesial activity. God’s word, listened to and celebrated, above all in the Eucharist, nourishes and inwardly strengthens Christians, enabling them to offer an authentic witness to the Gospel in daily life…The preaching of the word, living and effective, prepares for the reception of the sacrament, and in the sacrament that word attains its maximum efficacy.” (EG 174)

I think that the pope’s insistence that the Church let herself be evangelized is extremely important. While perfect in its head, the Risen Christ, the Church is not perfect in its members. Renewal in faith should be taking place not just when there is an ecumenical council, but also on a daily basis in the life of the Church and in the life of each of us. From the Holy Father to the most recent convert, to be part of the people of God is to be on a journey of faith.

In commenting on how the pope views the Church, Cardinal Kasper writes that a key word to describe Pope Francis’ vision is “mission.” Pope Francis does not only see the Church as preserving Christ’s truth, but also sees the Church as a missionary community.

I very much like how Cardinal Kasper stresses that Pope Francis does not see the Church as growing through proselytizing, but rather, through attraction. For me, this is an extremely important point. If we Christians really believe what we claim to believe, our faith should color all of our activities, indeed it should color our entire lives. Our faith and joy will be genuine and will attract people.

Aren’t Pope Francis’ faith and joy appealing to people? Aren’t his faith and joy attractive? How else can we explain the impact that this man has already had, not only on Catholics, but also on people of other faiths and on people who claim they have no faith at all?

The impact that the pontiff has already had is nothing short of amazing. What a phenomenon! Everyone is excited about this pope and it seems as though everyone is inspired by him.

Noting that the Holy Father emphasizes the doctrine of the People of God, Cardinal Kasper writes the following:

“Francis speaks of a mysticism of coexistence and encounter, of embracing and supporting one another, of participating in a caravan of solidarity, in sacred pilgrimage (EG 87) …he speaks of a mystical and contemplative fraternity, which knows how to see the sacred grandeur of our neighbor, of finding God in every human being (EG 92)” (p. 45).

I confess that I find the “mysticism of coexistence and encounter” absolutely beautiful and challenging. What coexistence means is that on every level of being human we depend on and are influenced by others. That this coexisting has a mystical dimension means that the Holy Spirit is present in every human encounter and in every human relationship.

By “mystical and contemplative fraternity,” I think Pope Francis is pointing out that the Holy Spirit enables us to see the deepest truth about other persons, namely that each person is a temple of the Holy Spirit.

If we allowed that truth to guide our lives, there really would be a revolution of tenderness and love.