This has been the strangest Lent of our lives, as it will be during the Holy Week we start this Sunday. The crowds that usually fill our churches with palm leaves in their hands, won’t be there. The COVID-19 pandemic has forced the suspension of Masses and the closing of churches. We won’t be able to participate in the usual Masses, processions, and services of Holy Week at the time when we need them most.

At the same time, we are worried about the future, the health of our families and friends, the suffering of so many people who have died, are sick, or have lost their jobs. The sadness of not being able to celebrate the central mysteries of our faith and receive the Eucharist is widespread and understandable.

Most people understand that measures taken by the civil authorities and leaders are absolutely necessary to prevent countless deaths and much more suffering around the country and the world.

But there has been criticism directed at the bishops for the suspension of public Masses. While every expert will tell you that the suspension of Masses is a life-saving decision, some critics have argued that churches can’t be closed “like restaurants or movie theaters.” The argument is, of course, absurd. The fact that we needed to close churches and restaurants during a pandemic doesn’t make them equal.

The reason for the closing should be obvious: It is lethally dangerous to congregate in large numbers, whether it is in a restaurant or a church. That doesn’t mean they have equal importance or the same significance. We repair church buildings and movie theaters if they have some structural damage because they can collapse and kill the people inside. And nobody would argue that repairing the church building would be tantamount to equating it with a movie theater.

Two weeks ago, I was shocked by an article I read in First Things, one of the most influential religious magazines in the United States. Rusty Reno, its editor, has been one of the fiercest critics of the quarantine measures taken by civil authorities and Catholic bishops alike. He writes:

“Governor Cuomo and other officials insist that death’s power must rule our actions. Religious leaders have accepted this decree, suspending the proclamation of the gospel and the distribution of the Bread of Life.

“They signal by their actions that they, too, accept death’s dominion. More than one hundred years ago, Americans were struck by a terrible flu pandemic that affected the entire world. Their reaction was vastly different from ours. They continued to worship, go to musical performances, clash on football fields, and gather with friends.”

This is dangerous, of course. But it is also patently false. A brief research of newspaper archives from 1918 and 1919 shows plenty of evidence to disprove what Reno wrote.

Take the main headline across page 14 of the Oct. 5, 1918 edition of the Harrisburg Telegraph, for example: “All Church Services in City Cancelled Because of Influenza Epidemic,” it reads. The article underneath indicates that by orders of the “Acting Commissioner of Health for the State of Pennsylvania […] doors of all Harrisburg churches will be shut tight tomorrow.” 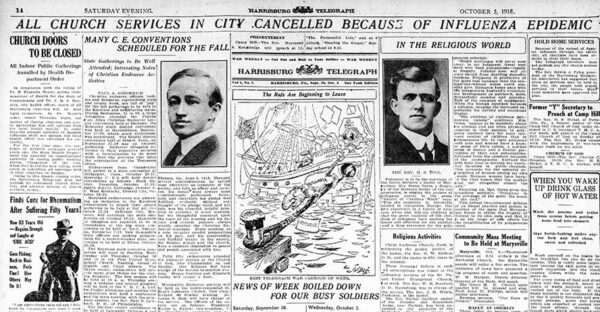 The same happened in Washington D.C., that very same day, as reported on page 10 of The Evening Star. You can read what “Msgr. Thomas, of St. Patrick, speaking for the Catholic clergy in the city,” after explaining the importance of Sunday Mass for Catholics, said: “The Commissioners may be assured that the Catholic pastors of the District will bow to their mandate.”

Many other examples can be found in the press from that time. You have to wonder why some people choose to defy the prudent decision of our civil authorities and bishops in this crisis and then falsify history to “support” their opinions. It is at the same time irresponsible and fraudulent.

2 thoughts on “A Dangerous Distortion of History”