Joseph Loposky loves all things music. The classically trained trumpeter enjoys playing music, talking about music, and, most of all, teaching music. During his 27 years as the music director at Xaverian High School in Bay Ridge, Loposky’s students have helped welcome two popes to New York City and performed twice at the White House.

It all began for Loposky when his father came home one day carrying a package.

Loposky grew up in the village of Endicott, New York, near Binghamton, where he attended high school and performed with the marching band. His music talent ultimately earned him a full scholarship to Wilkes College (now Wilkes University) in Wilkes-Barre, Pennsylvania.

“I played with the polka band there,” recalled Loposky.

After he graduated from college, he took nine months off to decide what to do next. Then a friend called and told him that Brooklyn College was looking for a trumpet player. He landed the job, and within two days, he moved to Brooklyn. Soon after, he auditioned for the popular Queens rock group The Fleshtones. “They were looking for a trumpet player,” said Loposky. “I was the first guy in to audition, and after I performed, they sent everyone else home. They liked the look, they liked the sound, and we recorded a few albums together. I played with the group from 1990 to 1994.”

Loposky traveled throughout Europe with The Fleshtones and even had the opportunity to perform with members of R.E.M. “They were part of my past in an ancillary way,” he recalled.

After his stint with The Fleshtones, Loposky returned to his classical roots and played with the Metropolitan Opera Trumpet Ensemble and The New York Choral Society Orchestra. Additionally, Loposky had the opportunity to perform twice at Carnegie Hall.

“That’s one of the things I’m extremely proud of, and my parents are proud of,” said Loposky. “I mean, a cowboy from a farm town playing at Carnegie Hall. You can’t beat that.”

Following a short tenure playing trumpet with the Mexican State Symphony Orchestra, Loposky received an offer from Xaverian. “I had to make a quick decision,” he said. “Do I want to stay in Mexico and perform, or do I want to come back to Brooklyn?” Loposky chose to take the teaching position at Xaverian.

The choice of Xaverian proved fortuitous in his personal life as well. He met his wife, a fellow teacher, there and looks back on the career change as one of the best decisions he ever made.

Xaverian’s Assistant Principal Michael Wilson called Loposky the architect of the school’s music program. “He is not only a dedicated and enthusiastic ‘guru’ of music, with an enormous heart, he has the patience to turn a beginner into a well-crafted musician.”

Loposky has kept the music playing at Xaverian in more ways than one. While funding for music programs is being slashed or eliminated in many schools, Xaverian’s program is thriving, with Loposky’s students going on to earn music scholarships to prestigious colleges and universities.

“It’s an interesting component where Xaverian is a high-level academic school with most of the students geared toward becoming doctors, lawyers, or engineers, but they still play and get scholarships,” he explained. “I’ve had students earn full-ride scholarships to schools like Syracuse, Oberlin, Manhattan College, and Drexel. Some may not be pursuing music as a major but as secondary to their education.”

Xaverian graduate Alex Ayoub has studied with Loposky since he was 10 years old and credited him for his music scholarship to Oberlin College.

“Mr. Loposky put his blood, sweat, and tears into the music program at Xaverian. It really showed because we all loved him,” Ayoub said. “He was always so passionate about what he was doing and would always make sure that we were taken care of. He really cared about us. 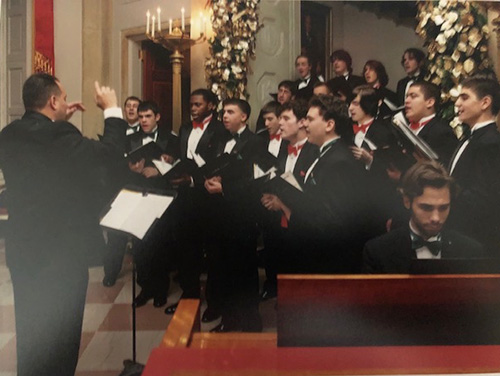 “It’s not something you can always get in a music education at any other school. I’m so lucky and blessed that I got to study music with him.”

Loposky has always been able to motivate students. He started in 1994 with one group, a beginning band, and he helped grow the program to include multiple bands and choruses. “For 10 years, it just snowballed, from one band, two bands, a jazz band, a chorus, an orchestra program with ultimately 20 performing groups.”

Loposky’s students were honored to perform before two popes when they visited New York. “We played for Pope Benedict in 2008 at his arrival ceremony to New York, and then for Pope Francis during his visit to New York in September 2015. It was what we call the ‘select band,’ which I ultimately called the ‘Pope band,” where we played classical and religious music,” said Loposky. “And for Pope Francis, we performed a special arrangement of the Catholic hymn, ‘City of God.’ ”

Loposky recalled one teacher always giving him a hard time letting his students out of class for band practice.

“The music program at Xaverian has always been the lifeblood of the school community,” said Coan. “When I attended from 2008-2012, Mr. Loposky showed me the importance of exploring new hobbies and taught me the discipline to learn a new instrument.

“In my opinion, the vast range of different musical courses and clubs that are instructed by Mr. Loposky and his colleagues rival any others in the five boroughs.”

According to Loposky, faith has always been an integral part of his life. “I was brought up on faith, and my brother is a priest,” he explained. “It’s in our roots because that’s how our parents brought us up. The bottom line is, I’m a good Christian, and that’s what it’s all about.”

The journey has taken him and his students from two popes to an American president; Loposky’s chorus performed twice for President George W. Bush at the White House in 2001 and 2007.

Loposky has even performed with Mr. Las Vegas himself, Wayne Newton. As the principal trumpet player for the Staten Island Philharmonic for the last 27 years, Loposky had the opportunity to play with Newton when he performed at the St. George Theater.

“I immediately think of the consummate professional,” said Xaverian Principal Deacon Kevin McCormack when discussing Loposky. “He has the passion of the artist, he has the musical ear of an angel, and the patience of a saint.

“His students and the whole Xaverian community are blessed that he continues to serve us with all his gifts, 27 years and counting!”