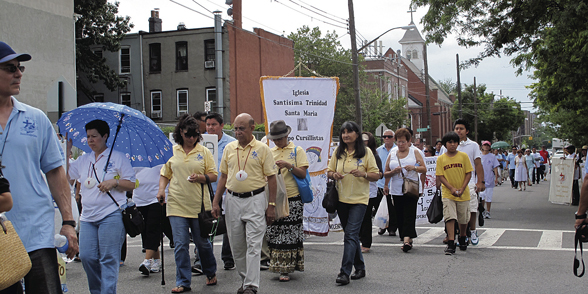 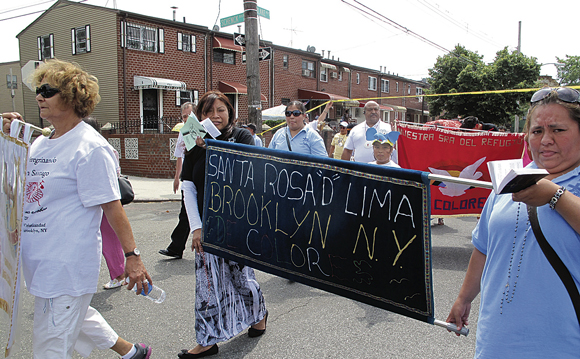 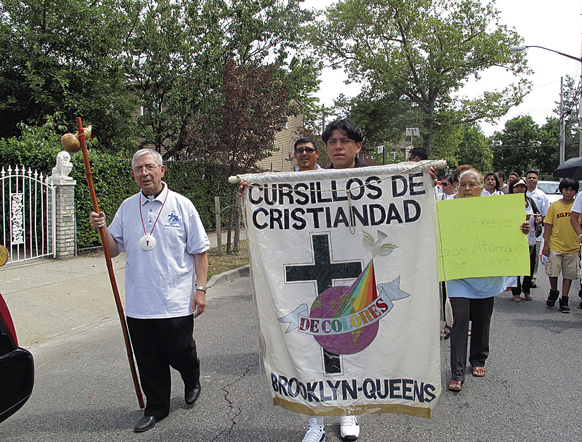 To celebrate the opening of its 50th year, the Cursillo de Cristianidad movement of the Brooklyn Diocese went back to the basics.

Its members went on a mini-pilgrimage in Brooklyn inspired by the Camino de Santiago in Spain, from which the movement was born. Keeping with the tradition of the Camino, the Cursillistas walked from church to church in praise of God and His Son with hopes of inspiring onlookers.

The pilgrims started their journey at St. John Cantius church, East New York. Armed with rosaries and banners, they made their way to St. Michael-St. Malachy. Some of the Cursillistas brought shells and walking sticks used in the Spanish pilgrimage as a way to align themselves with the spirit of a pilgrim.

“It’s part of our roots,” said Alexander Gonzalez from Our Lady of the Cenacle, Richmond Hill, during the pilgrimage. “We want to show our faith to all. We want to say that the Catholic Church is present.”

Lourdes Arias from St. Catharine of Alexandria parish, Borough Park, said coming to the pilgrimage was not a difficult decision. “We are Cursillistas!” she explained.

“I’m proud to be a Cursillista,” said Nancy Pruxes from Our Lady of the Presentation, Brownsville. “It’s a big family – especially when you are from another country.”

Gonzalez, who has been part of the movement for 12 years, said his Cursillo family has helped him grow as a person and bring him closer to God. He said that once he started devoting his time to the Cursillo, a whole new world opened up for him.

“I discovered many talents that I have,” he said. “We start giving these talents to the church.”

At the end of their urban pilgrimage, Msgr. Perfecto Vazquez, spiritual director, touched upon the Cursillo’s spirit of sharing God’s graces. He asked those present to use the talents God has given them to bring people closer to the Church.

“This year is a year of great opportunity,” he said. “It’s the Cursillista anniversary and the year of faith.”

With these two milestones, Msgr. Vazquez said the Cursillistas have a great opportunity to spread literature and information about the Catholic Church. He asked them to educate themselves further on the Catechism and theology, so that they may be more knowledgeable when they speak to others.

The task with which Msgr. Vazquez charged his Cursillistas is an echo of the mission of the earliest Cursillistas.

The worldwide movement was a response to a call Pope Pius XII made in 1940 for a return to Christian values. A year later, youth in Spain, Juventud de Accion Catolica, planned an event for 100,000 youth to walk a pilgrimage to Santiago. The Cursillo officially started in 1947. Its influence soon broke all barriers and arrived in the United States in 1957 in Waco, Texas.

The Brooklyn Diocese held its first Cursillo on Dec. 6-9, 1962 in the Monastery of Suffern, N.Y. Today, the movement has a base in 56 parishes around the diocese.

Nelly Gutierrez, who serves as the current lay director, said the Cursillo movement stays true to its roots while facing modern challenges.

“We are a movement of the Church here to help each one of us comply with our baptismal responsibilities of spreading the Good News throughout the world by way of living a life in grace and evangelization of our surroundings,” she said.

Gutierrez said the movement is always looking for new leaders to continue its mission. Leadership classes meet every Monday at 7 p.m. from September thru June at the church of St. Michael-St. Malachy.