Bishop Nicholas DiMarzio visited Bensonhurst on Pentecost Sunday to celebrate both the birth of the universal Church and the birth of St. Mary, Mother of Jesus Church 125 years ago.

The bishop brought a challenge to the people of the parish.

He asked them to foster the gifts and the strength bestowed upon them by the Holy Spirit through their Baptism and Confirmation, just as the first Christians did.

Bensonhurst is in a way similar to the community the Apostles found themselves in, he said, because it is made up of many ethnicities, speaking various languages, that must be welcomed by the Church.

“Keep that tradition alive,” the bishop said during his homily. “We need to fill our churches, but we can only do that with the new evangelization.”

The tradition of St. Mary, Mother of Jesus, dates back to 1889, the year the Eiffel Tower was built and the year the automobile, motion-picture machine and “the miracle drug” aspirin were invented.

The Brooklyn Bridge, which was completed a few years earlier, allowed people to live in Brooklyn while working in Manhattan. With an expanding population, the first shepherd of Brooklyn, Bishop John Loughlin, called upon Father James McAleese, pastor of St. Rose of Lima, Parkville, to begin the formation of a new parish.

On Pentecost Sunday 1889, Father McAleese said Mass for a group of 20 people in the storefront of Liggett’s Drugstore on Bay Parkway and 86th Street. He continued to offer Mass there until

September of that year, when Father Maurice Hickey was assigned to be the new parish’s first pastor.

The next year, on Trinity Sunday, the first church building, a wooden structure in the English Gothic style, was opened with a high Mass celebrated by Father Hickey. Bishop Charles McDonnell later dedicated it in June, 1892.

During this time, the parish prospered quickly, as was evident by the transportation service it offered. The parish owned a stagecoach drawn by a team of horses on loan from a local farmer.

“Each Sunday and holy day, the stagecoach made its rounds from the village of Gravesend, serving 40 families who would attend the 8 or 10 o’clock Mass,” states an article from The Tablet, dated June 11, 1964. “The stagecoach lasted until 1898, when the people of Gravesend got a church of their own – SS. Simon and Jude.”

Although the geography of the parish shrunk, the congregation continued to expand. In 1913, the wooden church building was moved down the block to allow room for an expansion that would triple capacity and erect a new school building.

The parochial school was staffed by Sisters of St. Joseph who became an integral part of the community.

“Although families lived on meager budgets, it was a common practice to send a supper or perhaps some ice cream to the sisters who lived in the old convent,” the parish’s centennial journal states.

The journal states this behavior was simply part of the generosity inspired by “the warmth and goodness” of the pastor, Father Murray, who served the parish from 1912 to 1923.

“Many a time, I met Fr. Murray on Kings Highway and West 9th Street and he gave me three cents to buy a frappe in Cordt’s Ice Cream Parlor,” recalled Mary Curtin Flannery, class of 1923, in the journal. “He was continuously walking on his rounds up and down the streets of his large parish. Everyone loved him, especially the children.”

Father Paul Curtin, S.J., recalled growing up in the parish and selling The Tablet after Mass, hoping for a nickel’s tip. In the journal, he recalled the parish’s warmth.

“The church, the school and neighborhood were anchors of solidarity,” he said. “No one was rich… Pleasures were simple… God was important.”

The strength of the parish would be put to the test in 1967, when a fire destroyed the church building.

Current parishioner John Redden said he vividly remembers that it happened on a Sunday. He was coming home from a Catholic Youth Organization basketball game feeling down. His team had just lost, his girlfriend had just broken off their relationship on Saturday and he had failed a Spanish test on Friday.

He was walking down Bay Parkway, trying to clear his mind, when he heard fire trucks. Though he had never done such a thing before, he followed them until he ended up in front of his church that had witnessed the wedding vows of his parents and where, although he did not yet know this, he had already met his future wife. It was where he served as an altar boy and where he went to school. It had gone up in flames.

Redden ran into the local pizzeria and called other parishioners to tell them what was happening. Although the firefighters were able to contain the fire and put out the flames, the fire had claimed the church.

He stood in front of the destroyed church with his pastor, Father Francis Reilly.

“I wasn’t even used to it being gone and he was ready to start rebuilding,” Redden wrote in the centennial journal. “In that instant our new church was born and I was there to see and feel it. Father Reilly was cold and wet from going in the church after the fire. He had a forlorn look in his eyes but the cold and the catastrophe he was faced with could not dim his faith.”

Father Reilly stayed true to his word. He launched a building campaign with an initial goal of $500,000, which was soon increased to $750,000. Fulfilling a goal he had set, the pastor left the parish debt free.

Not only was the new church built with fire safety in mind, it was modernized in a circular structure that was wheel-chair accessible. It has a seating capacity of 1,000, and the basement can hold another 800.

Parishioners spent three years attending Mass in the school gymnasium as the church was being built. The opening of the new church was such an important event for the community that Father Robert Adamo, pastor of Immaculate Heart of Mary parish, Windsor Terrace, can still remember going into the new church for the first time and noticing that there was plastic on the carpets. He could count his age on one hand at that time.

Robert and Ida Daniels, who have been parishioners for over 50 years, also remember being impressed with the new church.

“I loved it,” Ida Daniels said. The circular shape of the church and the ways the pews were set up allows all to see the altar, facilitating prayer.

Father Adamo said St. Mary’s had a great impact on his childhood and his vocation. He would go to Mass with his grandfather every Sunday, and as he grew, he integrated himself into the parish community and became an altar boy. 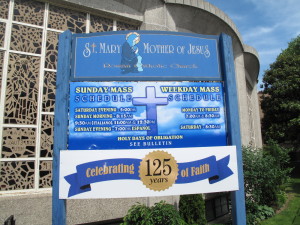 “I loved going to church,” he said. “There was a strong sense of community. Everybody felt welcomed and loved and part of the community.”

The priests and nuns at the parish began to encourage him to consider a vocation to the priesthood. He offered his first Mass of thanksgiving at St. Mary, Mother of Jesus Church on June 28, 1998.

The parish continues to encourage prayer among all people. It hosts a sign-language interpreter at every 12:30 p.m. Sunday Mass.

The current pastor, Msgr. Andrew Vaccari, said he looks to the future with faith. Although many Catholics have moved from the area, he said those who remain are fervent in their faith.

“People are involved and are willing to sacrifice a lot of their time and energy,” he said.

The parish has around 15 graduates of the diocesan Lay Ministry Program who play a major role in parish life, the pastor said. The pastor said God has taken care of St. Mary, Mother of Jesus Church and will continue to do so.

“The Lord is not finished with His blessings,” he said. “There are more to come.”

6 thoughts on “125 Years of Faith in Bensonhurst – Many Blessings to Come for St. Mary, Mother of Jesus Parish”