During its first Mass of Advent, St. Rita’s parish, East New York, celebrated the opening of its centennial year.
Auxiliary Bishop Octavio Cisneros was the main celebrant at the Mass to honor the parish that helped form him as a priest. He served his year as a transitional deacon there 42 years ago. 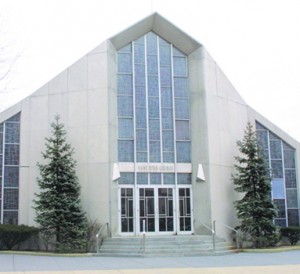 “Every time I come to St. Rita’s, I feel a joy,” he said. “It is a peaceful joy that is deep within me. It was here that I celebrated my first Mass. It was here first that I acted as the person of Christ.”
During the opening Mass, Bishop Cisneros, on behalf of Bishop Nicholas DiMarzio, installed Father Luis Laverde as pastor. Father Laverde has served as administrator since Nov. 1, 2010. Bishop Cisneros asked the congregation to pray for the new pastor as he fulfills his role of servant of God. At the end of the liturgy, Father Laverde thanked and praised the parishioners of St. Rita for their love. He said: “For a hundred years we have given testimony that God is good.” To which the congregation responded: “All the time!”

Roots of Love and Fellowship
A sense of love and fellowship can be traced back to the beginnings of St. Rita’s parish. In 1913, Father Marco Simonetti was assigned to the newly established parish, which served a population of mostly low-income Italian immigrants. Upon analyzing the economic situation in the neighborhood, Father Simonetti realized he would have to ask for outside help.
Trusting in the generosity of the people of the diocese, he made an appeal for funds to help build a church.
“Donations however small and whatever faith will be gratefully acknowledged,” he stated in his appeal, which requested for funds to be sent to him at his temporary address, 367 Essex St.
St. Rita’s parish celebrated its first Mass in the basement of St. Michael’s Church. However, the very next week Father Simonetti was able to rent a store to be used as a worship site. Within the next three months, the pastor was able to procure enough funds to buy a block worth of property. On Easter Sunday, 1914, St. Rita’s Church held its first solemn Mass.
By the 1960s, the parish community had outgrown its original building, which had many infrastructure problems. Therefore, with the guidance of Msgr. Santi Privitera, pastor, and Father Dominic Schiraldi, parochial vicar, ground was broken for the existing church in 1964.  Father Laverde said St. Rita’s parish was able to withstand the test of time because the community stuck together like a loving family.

“Everybody is here for everybody,” said Deacon Ron Ronacher. “It’s a family that is united together.”
Parishioner Roxanna Elder said that although she has now moved away from the parish, St. Rita’s will always be her home.
“There is a warmth here that I never felt before,” she said. “No matter how far I go, my home will always be here.”
She said it was the community that inspired her to be a teacher when she was a student at St. Rita’s school. She said she still remembers Sister Alice Kabis, S.S.N.D., the teacher at St. Rita’s School that taught her and her classmates to dance in the church basement.

My Love, My Doves, My Beautiful Ones
“She always used to call us, ‘My loves, my doves, my beautiful ones,’” said Elder, who is now the assistant principal at Salve Regina Academy, East New York. St. Rita’s School adhered to the diocesan academy model and closed to become part of Salve Regina Academy in 2011.
Parishioner Alex Saa said St. Rita’s continues to inspire people in the neighborhood to serve God. He completed the Rite of Christian Initiation for Adults process three months ago. He felt a need for God, he said, and came to speak with Deacon Ronacher.
“I felt I was disconnected from God,” he said. “My girlfriend and I wanted to get married … and I wanted God’s blessing.”
Saa said the parish community supported him in his journey and encouraged him to become involved in the church. Now he helps the parish in any way he can and vice versa, he said.
Father Laverde said finding ways for people to truly contribute to the parish and appreciating that contribution is an important evangelization tool.
“There are many young people here because there is a place for them here,” he said.
Jessica Castillo, youth minister, said the parish is continuously finding new ways to involve young people including monthly youth Mass, social events and community service projects. 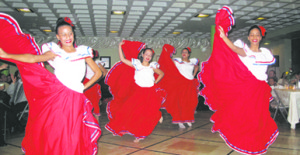 Father Laverde said the reason parishioners are able to treat each other as family is because God is at the center of all that they do.
“They always work together, especially during the Sunday Eucharist,” he said. They have a fervent devotion for Christ in the Eucharist.
Looking to the next hundred years, the pastor said his hope is that the parish will continue to attract such devoted parishioners. 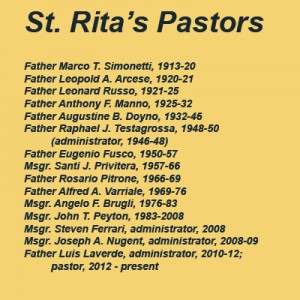