A group of young people gathered in front of St. James Cathedral in Downtown Brooklyn, ready to embark on an 11.5-mile pilgrimage to the Shrine of St. Frances Cabrini in Washington Heights, Manhattan, Nov. 9.

The morning air was cool and clear. American, Italian and Vatican flags led the way as we started the journey with the scenic walk across the Brooklyn Bridge.

In between dodging what turned out to be serious Saturday-morning cyclists, friends chattered and laughed. The general feeling was that everyone was excited and optimistic about the journey ahead.

Things quieted down a bit when we stopped over the East River to pray and to consider the reason for this mission.

As we headed into Manhattan, it was clear that spirits were still high. Many of the young people were grateful for the break at the Church of St. Francis of Assisi, but after resting and paying respects, we headed out again.

The next challenge was the ever-bustling Times Square, where we made our way through crowds of tourists, New Yorkers and Sesame Street characters, all of whom seemed very interested in our “little parade,” as they called it, and wanted to know exactly why we were marching.

The interest of all these people and others we passed along the way was inspiring.

While some people showed typical New York guardedness and steered clear of our group, many others asked questions and happily accepted the cards that told about our pilgrimage.

A few people even joined in, including a Jewish man who walked with us for several blocks while deep in discussion with one of our group members.

One particularly enthusiastic construction worker signaled for us to wait and ran inside, returning seconds later with his own Italian flag. He waved it in excited solidarity.

Another man came up and expressed his deep gratitude to the Church for all that its people had done for him, talking about how the Church had helped him to turn his life around and how he admired the pilgrims for embracing their faith. Then he too joined us for a time, helping to carry the banner.

As we walked through different neighborhoods and met all these people, we sang, talked, prayed and mediated. But as motivating as the atmosphere was, many people were beginning to fade by the time we reached the second stop. Sprawling across the church’s steps as if they were a bed, pilgrims guzzled water and rested aching feet.

Having already walked an estimated 11.5 miles and realizing that the total journey would be closer to 15 miles, some of the pilgrims decided that they couldn’t make the rest of the trip and chose to meet us there instead.

Those of us who did continue on were, by this time, sore and tired, making the final miles feel like an uphill battle – not least of all because most of it was uphill.

Finally, seven hours and 16 miles later, we arrived at the Shrine of St. Frances Cabrini. 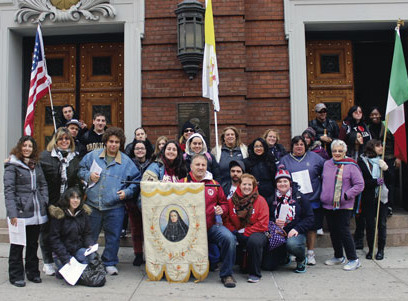 The last leg of the trip may have been the hardest, but it was well worth it. We walked through the open gates of the shrine with relief and joy evident on our faces.

We settled into the chapel and listened as one of the nuns spoke about the life of St. Frances Cabrini and how much she loved this country and the youth. We then heard the Gospel and received Communion.

Afterwards, as we rested and ate a little before boarding the bus home, there were no words of regret bouncing around the room. Everyone seemed glad they had taken part in the pilgrimage, difficult as it may have been.

“It was long, it was tiring … but all worth it when you make it here,” said pilgrim Joe Hadzovic. “I’m feeling just amazing and really blessed and holy.”

We were proud of ourselves, both for completing the walk and for making a real sacrifice in the name of St. Frances Cabrini, and that sacrifice would have been diminished had the road been easy.

The sun set as the bus headed back to Brooklyn, coloring the skyline in shades of pink. It took only an hour to make the same trip that had taken us so long earlier in the day, but then, it’s not always about how fast you get there.