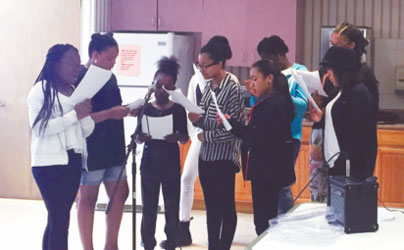 In honor of Father’s Day, some of the youths of St. Thomas Aquinas’ Youth Group, Flatlands, visited St. Joachim and Anne Nursing Home in Coney Island, along with their moderator, Father Dwayne Davis.

As they visited the residents, they sang songs such as “The Star Spangled Banner,” “Happy” and “He’s Got the Whole World In His Hands.” The residents were happy to sing and clap along.

The youth were honored, with tear-filled eyes, to sing “Happy Birthday” to a resident who is turning 103. Father Davis gave all of the residents a touching blessing and a special blessing to the “birthday girl.”

The youths were moved, and when asked how they felt after they visited the residents, they responded openly. The feeling amongst them was mostly gratefulness and love.

The youths then gave the residents gifts, and as they did, they were able to walk around and speak with them. In doing do, the young people learned how they can be the hands and feet of Jesus in today’s world.