News happens when you least expect it. That was the case when a fire alarm during the 2017 Tablet High School Press Awards caused those inside the Brooklyn diocese’s main building in Prospect Park to evacuate immediately.

After a 30-minute delay, the New York Fire Department allowed the students and their moderators to re-enter the building. It was a key moment for The Tablet editorial staff to restart the ceremony with a real-life journalist-in-training exercise and to ask students what they would write if they covered this event for their newspaper.

Students from St. Joseph H.S., Downtown Brooklyn, recalled key details including how many fire trucks were present to what emotions passersby had on their faces. The budding writers from the seven schools that participated in the annual ­competition were attentive from the start of the ceremony to the end. They responded to questions from keynote speaker Katina Paron and asked thorough questions after her presentation.

Paron discusses the media organizations she has overseen in her 20 years of youth media experience.

During the question and answer portion of the event, youth editor Melissa Enaje asks a question about politics and the media.

Students interviewed other students during Bingo, checking for spelling and accuracy.

The awards were given based on the paper's close ties to its student body.

Tablet editorial staff discuss what it takes to become a winning submission.

The winners' awards kept piling up!

All smiles during the award ceremony for members of Veritas, St. Agnes Academic H.S.'s newspaper.

Paron offered insight to the students as a youth journalism expert with more than 20 years in youth media experience. As the author of the upcoming comic-book style illustrated textbook entitled A NewsHound’s Guide to Student Journalism, she honed in on the importance of high school journalism as an act of service not only to readers and sources, but also to American democracy.

“Teens talk to teens differently,” said Paron. “That’s why high school journalism matters.You can talk to other young people and get a story that no one else can get. If you’re not talking to them, that means 26 percent of the population isn’t getting their voice heard and part of the tenet in journalism is to be a voice to the voiceless.” After the awards, with General Excellence going to The Stanner at Archbishop Molloy, Briarwood, students enjoyed lunch and the opportunity to network.

Congratulations to all the 2017 High School Press Awards Winners!

Thank you to our keynote speaker and to the newspaper moderators for all the hard work you put into making youth journalism a success! 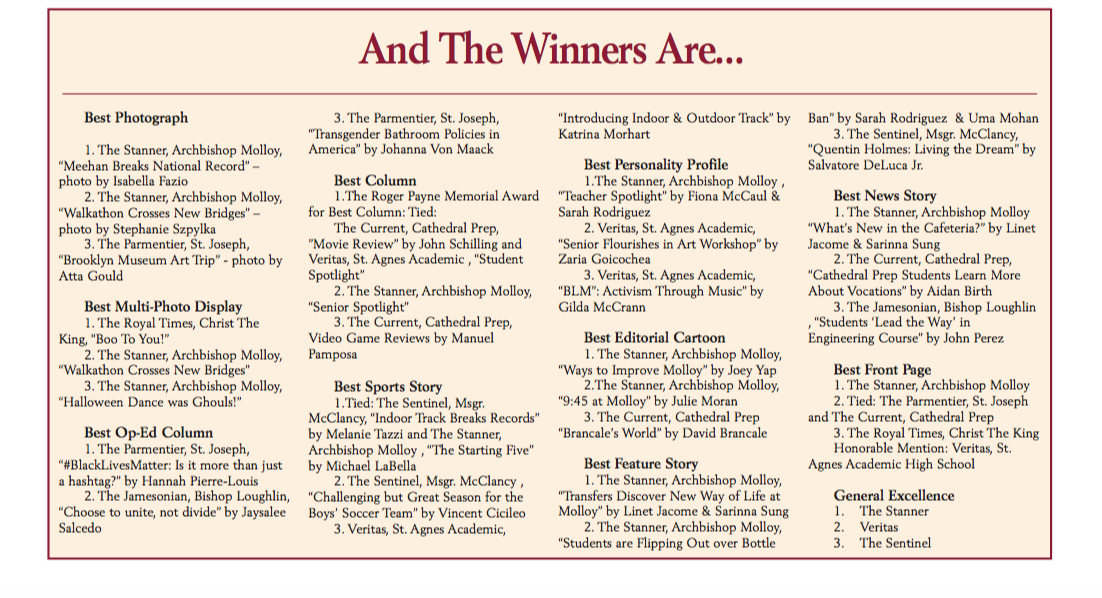