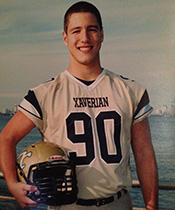 The Staten Island resident earned the honor over 200 other defensive line participants. He was a 2014 Tablet all-star after recording 76 tackles and 8.0 sacks during his sophomore season.