The last three times this Brooklyn priest went for the sacrament of reconciliation and was asked what his sins were, he mentioned just how disgusted, angry and frustrated he was about the unraveling of the Church’s abuse crises including the lack of transparency throughout the timeline of former Cardinal McCarrick’s post-resignation status.

For the past 19 years of Father Christopher O’Connor’s vocation as a parish priest, he said he heard about the horrors of sexual abuse, mostly from victims outside the Church, at least once a week.

“You slay people’s souls in a lot of ways,” said the pastor of Blessed Virgin Mary Help of Christians parish. “You read stories about the victims – you know, drug use, alcoholism, suicide attempts. Nothing makes up for their suffering but this is a way of acknowledging it.”

Coming together as a community and addressing the Church’s failings, while also acknowledging the bishop’s sustained efforts at tackling the issue, was the focus at a parish town hall meeting held at the Woodside parish, Sept. 6.

“People feel like they can’t talk,” he added. “I talk about it so they might feel comfortable talking to me. Finally telling someone is a major step in just being free. I just try to show love, a father’s love.”

The evening meeting began the same way the parish now begins their Masses since the Pennsylvania Grand Jury report came to light – with a prayer to St. Michael the Archangel to combat the forces of evil.

For more than an hour, a small group of attendees listened to Father O’Connor’s presentation and chimed in when a slide stirred their senses. The first part focused on the diocese’s stringent efforts at safety and prevention methods, including background checks that lay parishioners must undergo when they want to serve in the Church.

The diocese’s Safe Environment Office stated that since Bishop Nicholas DiMarzio began his tenure in Brooklyn after the late Bishop Thomas V. Daily in 2003, a year after the Church’s last redefining moment in sexual abuse with the Dallas Charter, more than 70,000 people have been trained in the Church’s code of conduct and completed a background check.

Father O’Connor explained the efficiency of the screening process when a person in one of his former parishes wanted to become an extraordinary minister of Holy Communion, but was denied that particular opportunity after a background check indicated how the person once served time in prison for manslaughter.

But not too long after Father O’Connor’s presentation began, one attendee immediately raised his voice and wondered if town hall meetings were occurring throughout the diocese. The man was taken back when he realized it was actually the pastor’s own initiative to hold the meeting not too long after the parish gathered for a Holy Hour to pray for the sins of clergy sexual abuse. 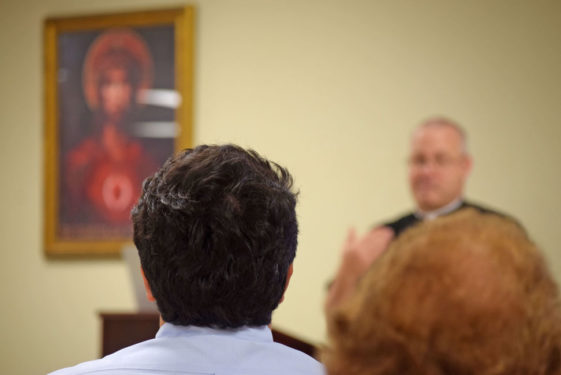 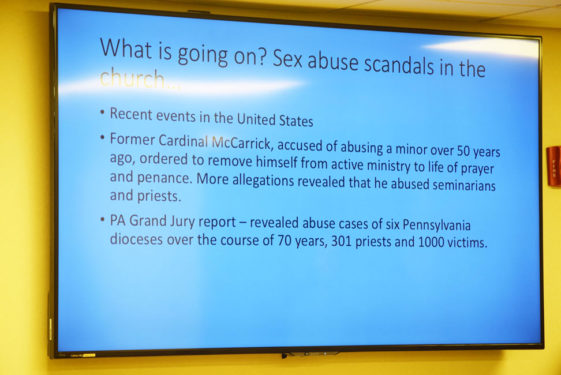 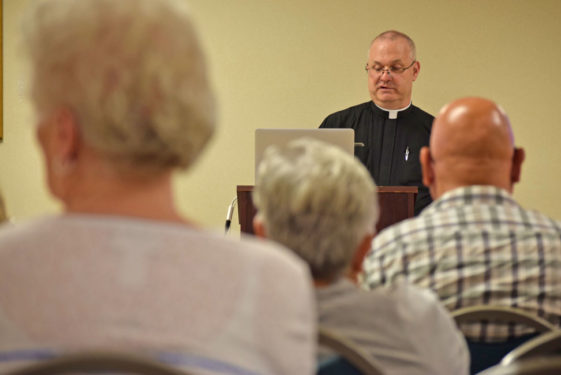 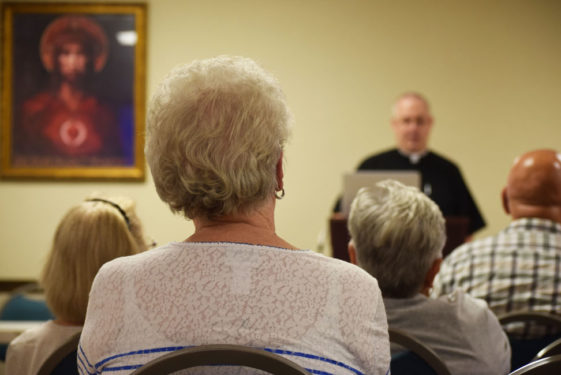 In this case, after he saw the need for communal prayer in times of crises, the opportunity also arose for dialogue within the Church – a notion Pope Francis usually supports but found otherwise, at least in this stage of the allegations beset before him. The pope’s decision to remain silent during the former apostolic nuncio’s allegations didn’t fare well for attendee Lourdes Lapolla.

“I’ve been a strong supporter of Pope Francis,” she said. “Recently I read something where his latest comment was he was being silent because he felt it was called for. I feel like that one threw me back because that’s the problem, we’ve been silent.”

While she didn’t think the Holy Father should resign, she did want to see a little more accountability on his behalf.

“He definitely needs to take steps to show that he wants to claim what’s going on and not condone or makes excuses for anyone. If people need help because they have vices or addictions, they need to get the help they need, but they need to be removed from positions where they can do harm, there’s been enough harm done.”

Related: Anger and Prayers For the Sins of Clergy Sexual Abuse

Topics the attendees discussed transitioned to seminarian background checks, bad priests versus good priests and one topic heavy in debate – compensation for survivors. Agreement was a non-factor between attendees when it came down to the need for survivors to receive assistance from the diocese.

The concern on the table instead was how the money was generated, whether through parishioners own tithes or from other susceptible properties in the Church like academies or schools.

The Brooklyn diocese has paid out more than 350 settlements through its Independent Reconciliation and Compensation Program (IRCP).

When the program first began in 2017, Bishop DiMarzio’s weekly column in The Tablet addressed such financial concerns when he stated that “the diocese will take out a loan to cover for the cost and pay it back with rental income.” He stated that no monies from parishes, schools, charitable works, ministries, apostolates or the Generations of Faith fundraising would be used but instead the “burden” would be “felt by the central diocesan administration.”

While it was a year since Father O’Connor first introduced the diocese’s compensation program when he presented its video to parishioners, he said the current state of affairs seemed to connect the dots.

“They did seem receptive and I think some people were just not aware when you say things, but now because how hot the item is now, how relevant it is, they now understand a lot more,” he said.

One attendee whose been a part of the Woodside parish since the late ’50s said that while he thinks the diocese is ‘taking care of its job’ when it comes to safety and abuse prevention, he would like to see more transparency.

Another topic during the night focused on the consequences felt by this tidal wave of revelations within the Church – particularly by priests who have done no harm. For parishioner and Holy Cross H.S. teacher Daniel Maher, he said the students at his former all-boys Flushing school share a bitter resentment towards how they look at priests in general because of what they see in the media.

“Their attitude towards priests is that now, it’s so badly besmirched,” Maher said. “So as a Catholic school teacher, I’ve got to really talk about if you really want to serve the Church, if you don’t like the way it is, if you don’t like seeing that, you should probably get involved. You’re not going to fix it from the outside, you fix it on the inside. You join the priesthood yourself and straighten it out in your terms.”

Father O’Connor printed out a comprehensive article for attendees. It was based on research data compiled by psychologists that focused on separating facts about clergy abuse from fiction. Bullet points included that clerical celibacy doesn’t cause pedophilia and sexual crimes against minors; homosexual clerics aren’t the cause of pedophilia in the Church; and that the Church has used best practices to deal with this issue since 2002.

According to a statement by the diocese’s Vicar for Communications Msgr. Kieran Harrington, in 2002, Bishop Daily entered into a memorandum of understanding with the Kings and Queens County District Attorneys to produce the names of any and all priests against whom an allegation of sexual misconduct with a minor was ever made.

The numbers that the DA’s office would report would essentially be a large number because that was when the lump sum of all historical cases were received, according to the diocese’s victim’s assistance coordinator Jasmine Salazar.

“The diocese reporting line is an attorney who doesn’t represent us – just makes sure he gets necessary facts.We don’t filter out our report, they’re going straight to law enforcement agencies, the diocese doesn’t filter, it just all goes,” she said.