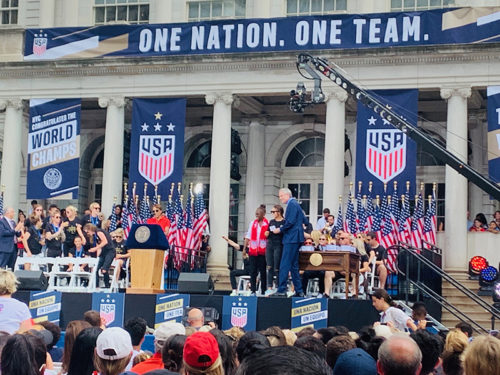 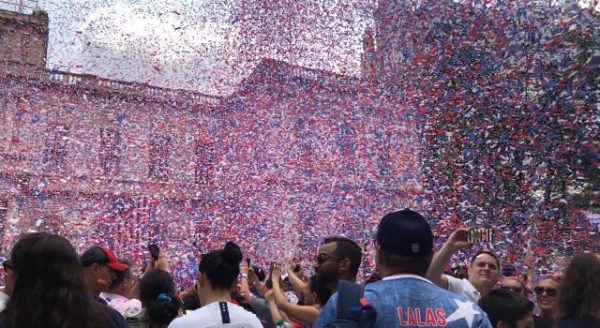 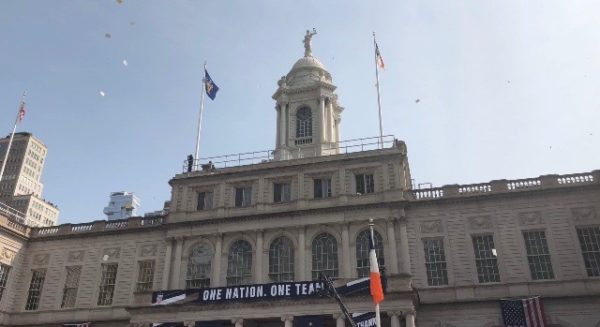 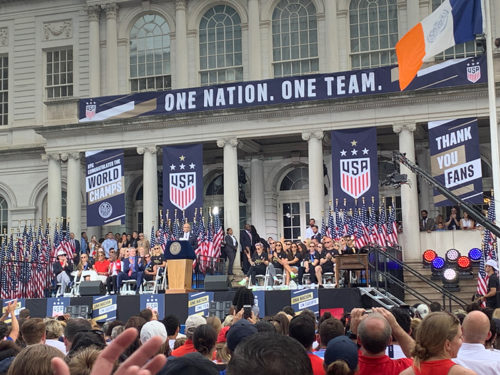 Gabriella Rinaldi and Carmela Doshna, two grade-schoolers from Queens, stood in a sea of stars and stripes along New York City’s Canyon of Heroes to see the World Cup champions, the U.S. women’s soccer team, on July 10. They knew this was a once in a blue moon experience.

Wearing Team U.S.A. jerseys, the two girls, who will be entering the fourth grade, lined up for a chance to see or even meet their favorite soccer players who were celebrating their World Cup title with a traditional ticker tape parade down Broadway.

The women’s team won its second-straight World Cup and fourth overall with a 2-0 victory over the Netherlands in Lyons, France, on July 7.

Carmela and Gabriella are parishioners of Our Lady of Grace church in Howard Beach, and they both play CYO soccer. Love of soccer and the community it builds prompted the two girls and their moms to go to the parade.

“I love watching girls play soccer. It shows that, like, I love this soccer team, and I love to watch them play, and it shows that girls can do anything,” Gabriella said. “They work so hard, and it’s like a family. They work all together and they’re here today.”

“When I think about my team back home, we’re like a family,” Gabriella added. “We also put in the determination like the U.S.A. girls, and it makes me think about how we were in the finals, but we lost. But we put in our determination to be there, and to even come in second place, we all worked together, and we’re like a family and we practice and we put all our hard work down on the field.”

Carmela said that like her favorite player, Alex Morgan, she never gives up. “We’ve worked so hard to go and be in the finals,” Carmela said.

As the parade made its way to City Hall, the two girls followed to catch a glimpse of the U.S. women players during a ceremony in which the women’s team was presented keys to the city by Mayor Bill de Blasio.

The parade was the second World Cup celebration Audrey Lataille, a parishioner of Our Lady of Hope, Middle Village, has attended. She also came to Manhattan in 2015 after the women’s team won the World Cup.

While Audrey is a seventh-grader and Our Lady of Hope is her home parish, the church does not have a spring  soccer team for girls her age. Instead, she plays on Holy Child Jesus Church’s eighth-grade CYO team, which made it all the way to the championships game this year.

The three girls who spoke with The Tablet are similar to U.S. soccer players Morgan Brian, Rose Lavelle and Tobin Heath in that like their heroes, their Catholic faith helps give them strength and determination to excel at soccer.

Heath told Beliefnet that her own sports career was for God.

“I try to keep that as my motivation when I step out on the field every day whether it’s practice or a game. It’s to work as hard as I can in thankfulness for what He’s given me and hopefully some of that can come back to Him,” Heath said.

“It makes you want to play better, really,” Gabriella said. “I am Catholic and it’s my parish, so I want to play for them and make my church happy and put in all the determination. It shows that you can play, and it makes me feel good to be part of this team.”

Amid ticker tape and confetti were chants for equal pay for women players. In March, the players filed a discrimination lawsuit against the United States Soccer Federation, claiming that they are paid less than players from the men’s national team are, even though the women’s team wins more games and generates more revenue. The two sides have agreed to mediation to try to resolve the case out of court.