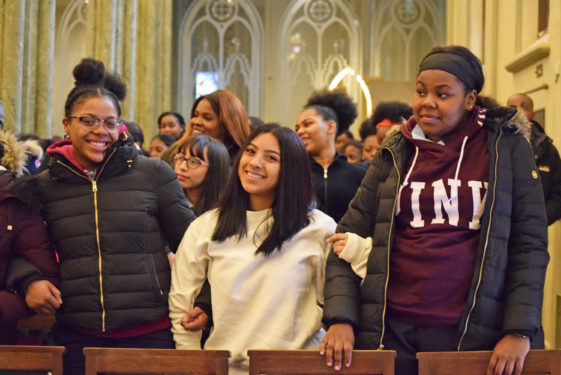 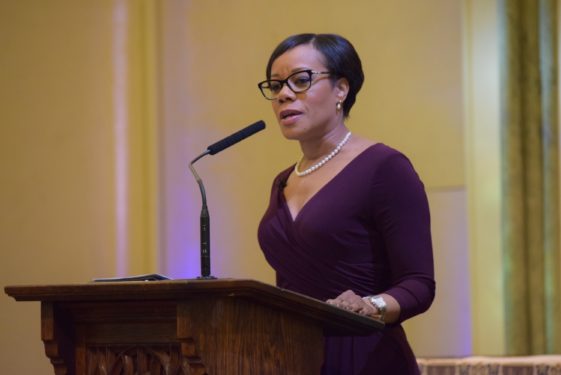 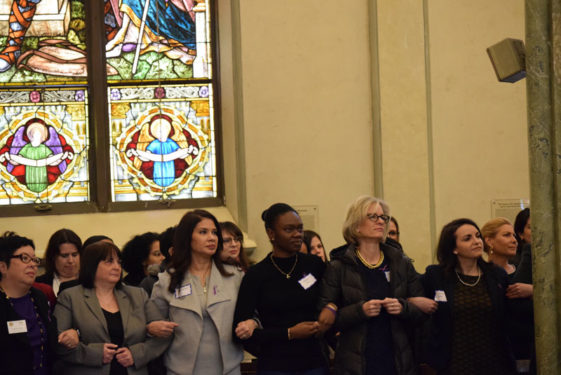 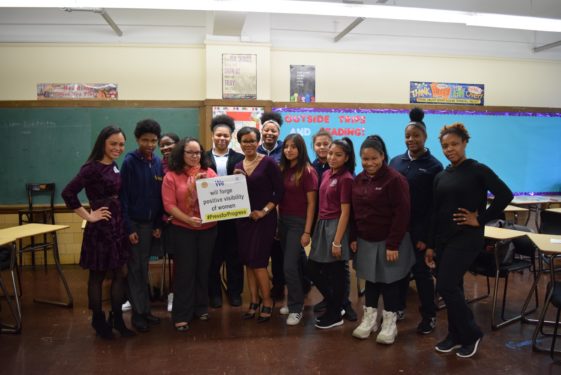 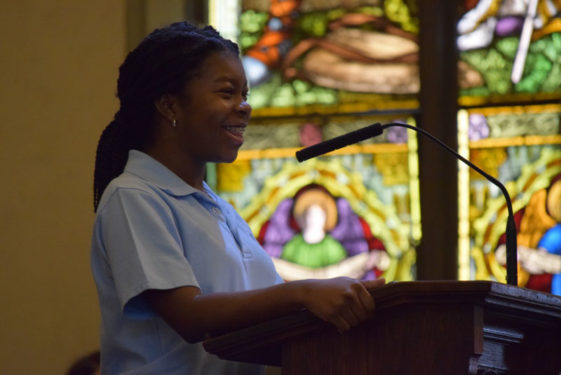 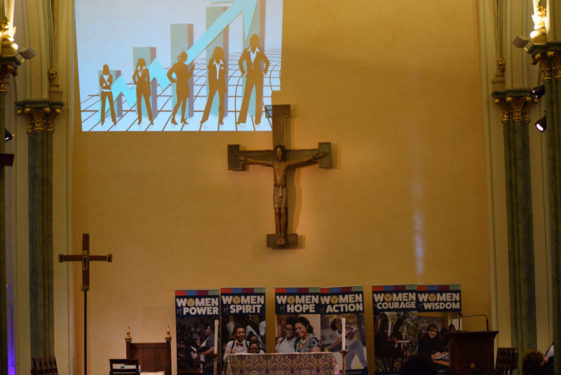 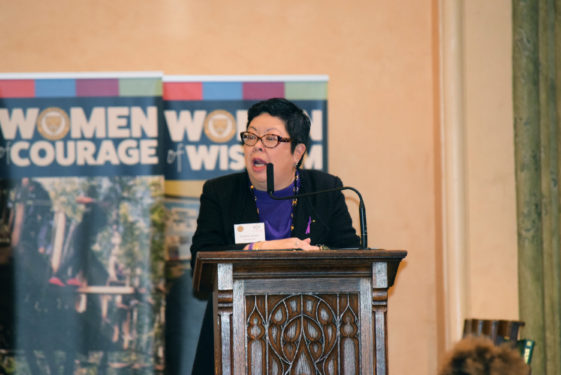 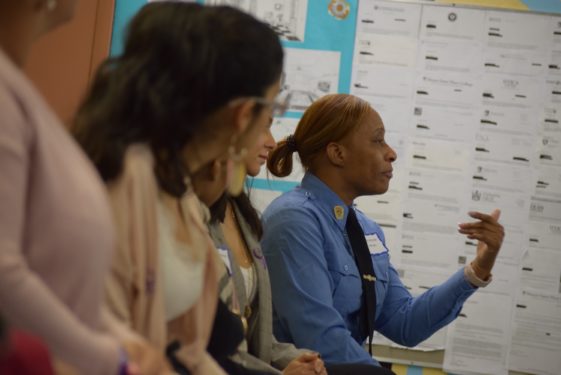 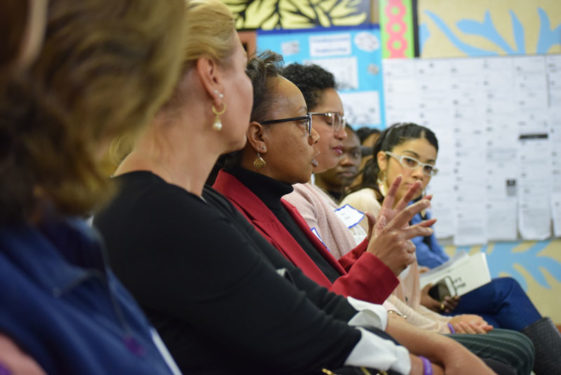 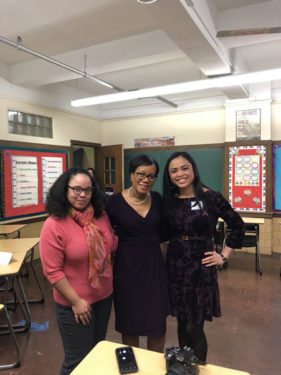 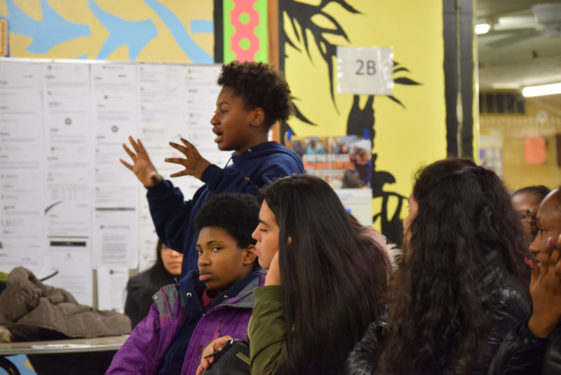 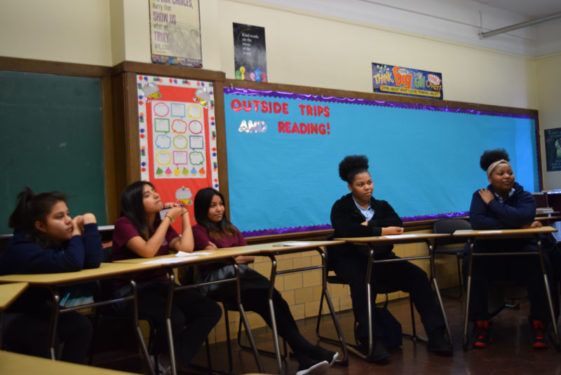 Accomplished women professionals from an array of career backgrounds shared their stories of success with students from St. Joseph H.S., Downtown Brooklyn, during the school’s 11th annual Women’s Professional Day to empower, inspire and encourage the young women.

The theme for the event reflected the same one as International Women’s Day – “Press for Progress” – which celebrated the social, economic, cultural and political achievements of women. School faculty, students and more than 40 panelists gathered at the Oratory Church of St. Boniface March 8 for the welcome ceremony.

“Always maintain control to express yourself effectively in every situation,” Faublas told the girls. “You are queens, carry yourself like that.”

She encouraged the students to be confident about their self-worth and to have unwavering faith that their futures will be outstanding. Her moving speech about women passing the torch evoked an emotional response – some clapped, some cheered and even cried. Faublas ended her speech by asking the entire assembly to lock arms as a symbol of unifying support for each other, which set the tone for the remainder of the day.

What the student body represented was a longstanding effort that the Sisters of St. Joseph envisioned more than 100 years ago when they wanted to create educational opportunities at a time when they were nonexistent. The religious sisters founded St. Joseph H.S. in 1904, according to Sister Patricia Lucas, C.S.J., who also spoke during the opening ceremony.

“Sister Joan, who was the principal here, used to say that in 1904 no one was educating women,” said Sister Patricia. “Maybe they were taught to read and write but they didn’t really have high school or even a thought of college much. There were some pioneers but all Catholic sisters across the country, we came into the country usually to do what needed to be done…the girls needed education. So we opened up a school in Williamsburg in 1856 and then this school was started in 1904. So we want to keep it going.”

She told those gathered at St. Boniface of the multi-faceted importance of March.

Whether the day sparked self-contemplation or the motivation to keep pressing forward, it also recognized resilience. For sophomore Ashely Beaujin, her peers believed she achieved something extraordinary and voted for her to speak about overcoming a complicated medical condition. At the podium, her only obstacle at the moment was holding her joyful composure despite the tears.

“Fast forward to now…I don’t have sickle cell disease and I’m so happy but it feels weird,” said Beaujin.

After the standing ovation, offertory prayers were said and panelists were thanked before heading back to the school for question and answer sessions.

“If I had an opportunity when I was in high school to speak to my former self I would’ve had the opportunity to say well…maybe I should be an educator, which is exactly what happened,” said Principal Caroline Latham. “Not that we can’t change careers, obviously everything I did in my life has led to who I am today. But it’s important to take note there are female role models that are here today to help you find your path.”

For the first session, rows of students gathered in front of the different panelists as they listened to women speak about their passions, how to discover ones talents, how to trust that God has a plan for their vocation in life and other honest conversations. The women shared life experiences that hopefully would offer insight that could create positive change.

She shared how supportive her classmates have been.

“In St. Joseph as an all-girls school we always encourage each other no matter what, even if I don’t know your name I’ll encourage you because you want to do that and I want everybody to be successful,” added Frazier who wants to one day become a criminal investigator.

Sophomore Jadira Bermudez attributed her growth as a young woman to her positive group of friends.

“As I grow, I take away the second guessing,” said Bermudez, who graduated from Salve Regina Catholic Academy, East New York. “More than me actually being afraid of what I want to do, it’s more of like I’m just starting to build confidence and take away all the discomfort and all the challenges that I put in my own head that I know that I’m just over exaggerating. It’s more I have to be true to myself and if I need something, I have to go get it.”

As school bells rang signaling the end of the panel sessions and the annual event, the hallways began to fill again with students. But in their midst were adults who have been in their shoes and understood their struggle, whether faculty, religious sisters, or the invited working professionals, who shared their time in order to remind the girls that their self-worth is priceless.