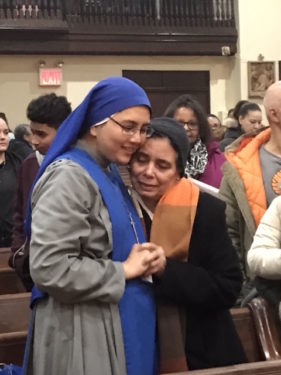 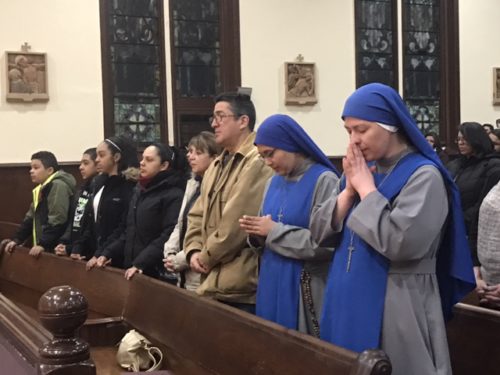 SS. Peter and Paul, Williamsburg, bid farewell to Sister Peace S.S.V.M., who is receiving a new assignment from her order after serving the parish’s youth for the past six and a half years.

After Mass and Eucharistic adoration March 3 at Epiphany Church, a worship site of the parish, parishioners surrounded Sister Peace showering her with hugs and holding back tears.

“She showed us that God is talking to her,” said 14-year-old Johanna Mateo, who explained that Sister Peace inspired the youth of the parish to open up their hearts and kept things fun.

Sister Peace was the youth minister at SS. Peter and Paul where she started many programs to engage the young members of the community. She did all she could to get the neighborhood youth involved from making phone calls to parents, to starting groups and holding events, to imploring everyone for prayers.

Father Carlos Velasquez came back to the parish where he served his pastoral year to give thanks for Sister Peace’s vocation. He was the main celebrant for the bilingual (Spanish-English) Mass of thanksgiving. He joked about how he could never end a conversation with Sister Peace without being asked for prayers.

“I think the best we can do for Sister Peace is to pray for her,” he said.

In her time at the parish, youth participation increased from a couple of kids joining her for group meetings to over a hundred coming out with her to pray and volunteer.

“The most important thing we have seen in you is your ‘yes,’” Father Velasquez said addressing Sister Peace from the pulpit. “In a world where many people say ‘no’ to God you continue to say ‘yes’… You taught me so much through your gentleness, kindness, through your desire to be charitable.”

“Sister Peace will have a new task,” he said. “We don’t know what it is, and neither does she. But God does. She goes with the protection of God. This project is not hers, but God’s. She is simply collaborating with the work of salvation.”

“She is a prayerful, loving, and committed missionary who desires to know Jesus and make Him loved in everyone she encounters,” said Mother Maria de la Revelación, S.S.V.M. She is also “friendly and a great cook!”

Sister Peace came to SS. Peter and Paul as her first mission after her time of formation in 2010.

“When I arrived, I was overwhelmed with New York City and the loudness of the culture of the people I work with,” she said. “Now, I love Brooklyn and every single person that I’ve served! I will miss them!”

Addressing parishioners, especially the youth and their parents, Sister Peace implored them to continue to allow God to work within them. She said she sees that hand of God in Williamsburg, working especially in the hearts of youth.

Sister Peace joined the Servants of the Lord and the Virgin Matará in 2006. She was born and raised in the Philippines. Her family moved to Santa Clara, Calif., where she was a member Our Lady of Peace parish.