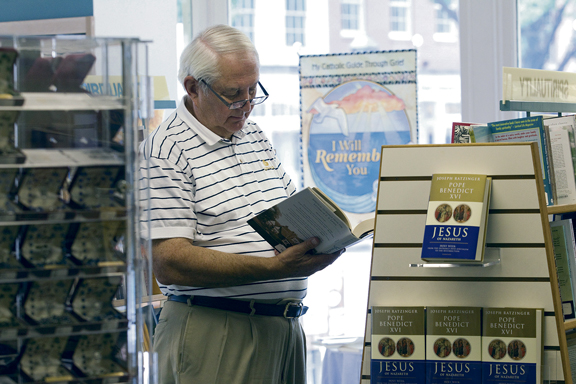 This is the second installment of our annual poll of readers about what books they are reading this summer.  If you would like to add to the list, send your summer reading to ewilkinson@diobrook.org.

Paul Moses
Brooklyn College, Journalism Dept.
“Helping the Bereaved College Student” by David E. Balk
“The Age of Reagan: A History, 1974-2008” by Sean Wilentz
“Meditations on the Song of Songs” by St. Teresa of Avila

Gabriel Parrish
Valley Stream, L.I.
“The Past Has Another Pattern – The Memoirs of George W. Ball”
“Personal Memoirs of Ulysses S. Grant”
“War Is a Racket” by Marine General  Smedley Butler

Magaret Riconda
Sacred Heart, Bayside
“The Greater Journey: Americans in Paris” by David McCullough
“Knocking on Heaven’s Door: How Physics and Scientific  Thinking Illuminate the Universe and the Modern World” by Lisa Randall
“The Great Animal Orchestra: Finding the Origins of Music in the World’s Wild Places” by Bernie Krause
“Seeing Further: The Story of  Science, Discovery, and the Genius of the Royal Society” by Bill Bryson

Bishop Joseph M. Sullivan
Retired Auxiliary Bishop
“Inferno: The World at War” by Max Hastings
“Drift: The Unmooring of Military Power” by Rachel Maddow
“House on Fire: The Fight to Eradicate Smallpox” by William H. Foege
“All is Grace: A Biography of Dorothy Day” by Jim Forest