After a month-long sojourn, the relics of St. Therese of Lisieux and her parents, Sts. Louis and Zelie Martin, are concluding their visit to the Brooklyn Diocese.

But devotees still have the chance to see them at St. Therese of Lisieux Church, East Flatbush, on Sunday, Nov. 11, from 8:30 a.m. to 2 p.m., and on Monday, Nov. 12 at Sacred Heart-St. Stephen Church, Carroll Gardens, where they have been on display.

“It has been a great blessing, a great honor to do this,” Msgr. Guy Massie, pastor of Sacred Hearts-St. Stephen, said of giving hospitality to the saintly guests.

The relics were brought to the diocese by the Magnificat Foundation as part of its silver jubilee day of thanksgiving in early October. The foundation allowed the relics to stay for several weeks in order to visit various communities for veneration.

Created by French sculptor Fleur Nabert for the Magnificat Foundation, the reliquary is the only one containing a family of saints.

Located atop a bronze pedestal, the reliquary features three pillars, each marked with the first initial of the saint it houses. The reliquary of Thérèse, a Doctor of the Church, sits in the center and contains a piece of her clavicle. Her parents’ pillars are joined by interlocking wedding rings – a symbol of the sanctity of marriage.

A single bronze flower adorns the front of each pillar – a rose for Therese who wanted to spend her heaven doing good on earth, answering prayers with roses –and for her parents, lilies. A bronze cross symbolizes the faith that unites them.

St. Therese was a 19th century cloistered Carmelite nun who lived her life in simple and humble service to God. She was canonized May 17, 1925. Holy spouses, Louis and Marie-Azelie Guerin, created a home of Catholic faith, love and service, nurturing the vocations of Therese and her sisters. The couple was canonized Oct. 18, 2015.

During their time in the diocese, the relics were entrusted to John L. Heyer II, pastoral associate at Sacred Hearts-St. Stephen parish.

“Being the custodian of the relics of St. Therese and her parents has been an honor and a privilege,” said Heyer, who is also a funeral director at Scotto Funeral Home, Carroll Gardens.

When plans were being made for Magnificat Day, he offered the use of a funeral hearse to transport the reliquary to and from the Kings Theater.

Since that time, with the Magnificat Foundation’s approval and under the direction of Bishop Nicholas DiMarzio, the relics have been on display at Sacred Hearts-St. Stephen and also traveling around the diocese so the faithful may venerate them. 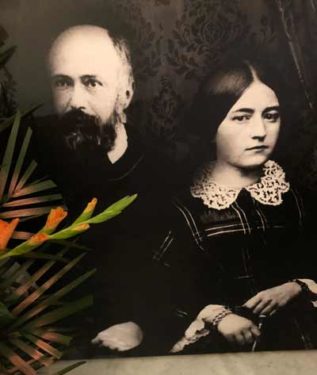 “She came to us. She wasn’t supposed to be here. So I always take this as Therese wanting to visit us,” said Msgr. Massie, who was surprised to find the relics on his doorstep a day after the parish marked the Little Flower’s feast Oct. 1.

St. Therese has always been close to his heart, and the hearts of so many people, he said, because ordinary people can relate to her humanity – and that of her parents.

“This is a lady who is not sugar and spice and everything nice,” he said.

“Even when she said I can understand why there is atheism – a holy woman like this saying that is so refreshing because it’s says we do struggle with these things.”

The first week after the relics arrived, parishioners who regularly visit the life-size statue of St. Therese – normally on the left side of church, but now in a place of honor on the right – were very upset that she was moved.

And when they saw the roped-off display with the relic, they were in awe.

When a couple visiting from Wisconsin happened upon the church recently, Troiano made sure to point out the reliquary.

The woman looked at him and said, “That’s my patron saint. I pray to her every day.”

“I told her, ‘So someone was pulling you into the church today.’ Things like that make me feel good, seeing people uplifted.”

The relics spent a recent afternoon uplifting the people of St. Teresa Church in Woodside, where Msgr. Steven Ferrari, pastor, and a few hundred parishioners came together to venerate the relics. The parish’s Filipino community also donated roses, which were each pressed against the reliquary and distributed to devotees. 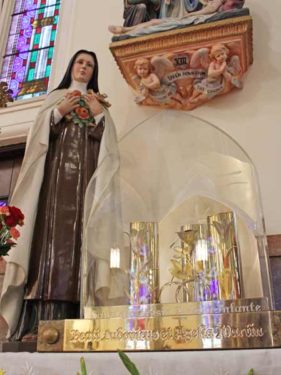 This week, the relics are visiting the Carmelite Monastery of Our Lady of Mt. Carmel and St. Joseph, Cypress Hills, before Heyer brings them to St. Therese of Lisieux parish.

Heyer’s own devotion to St. Therese traces back to his grandmothers and aunt, who instilled in him an appreciation for the Little Flower, for whom is firstborn, Maria Theresa, is named.

“The spirituality of finding God – and being able to praise Him – in all that we do in life, even the little things, has always been part of my own spirituality as influenced by St. Therese,” he said.

Having had the chance to be in the presence of and pray before the relics of Therese and her parents, he said, “has helped me understand better who I am in relation to my parents and grandparents, who helped form me in the same way Therese was influenced by the holiness she saw in her parents.

“It has also called me to look at my own family and relationship as a husband and father of three children, understanding the responsibility my wife and I have as the first examples to our children of what it means to be a follower of Christ.”