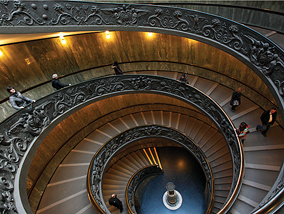 VATICAN CITY (CNS) – In 2011, for the first time, the number of visitors to the Vatican Museums topped five million.
Antonio Paolucci, director of the museums, said breaking the five-million threshold poses serious problems as well as challenges in the areas of access and education.

“Five million visitors means 10 million hands that touch or can touch and 10 million feet that, day after day, wear out the multicolored stone (floors) and the most famous archaeological mosaics in the world,” he said.

Writing in L’Osservatore Romano, the Vatican newspaper, Paolucci said the total number of visitors in 2011 was just under 5.1 million. In 2010, the museums reported having almost 4.7 million people enter its doors.

The museums expanded their opening hours in 2011 and added more of the special Friday night openings they experimented with briefly in 2009. The standard price of admission to the museums is 15 euros, or about $19.

With the growing number of visitors, Paolucci said, security is a growing concern and not just to ensure that people keep their hands off the art. The sheer number of visitors means there will be “an unknown, but certainly significant, percentage” of people with serious problems, who could pose a danger to themselves or others.
When dealing with such a massive number of people, even the best behaved cause damage because “they bring with themselves humidity and dust” which have a negative impact on the frescoes, stucco and mosaic tiles in the floors.

Paolucci said the 2011 record moves the Vatican Museums into the category of the largest and most visited museums in the world: the Louvre in Paris, which attracts more than eight million visitors each year; the British Museum in London, which had an estimated 5.8 million visitors last year; and the Metropolitan Museum of Art in New York, which reported more than 5.6 million visitors in 2011.