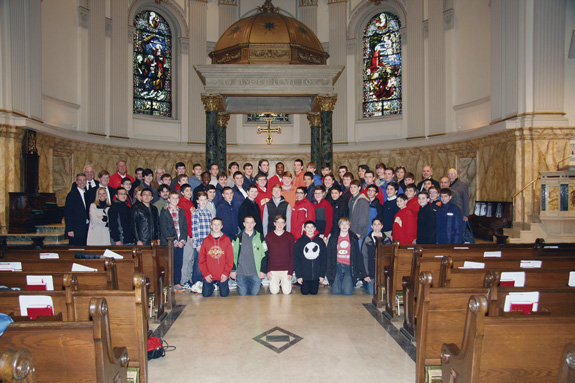 Above, 80 students and faculty of Chaminade H.S., Mineola, L.I., went on a pilgrimage to the Cathedral Basilica of St. James in Downtown Brooklyn. The group took the Long Island Railroad from Mineola to Atlantic Ave. and then walked to the cathedral. The rector, Msgr. John Strynkowski, greeted the group and gave an explanation of the church in that location and the history of the surrounding area. Msgr. Strynkowski gave each pilgrim a copy of a full-color photo book explaining the windows. Mass was celebrated in honor of the Immaculate Heart of Mary, with Father Paul Landolfi, S.M., as celebrant. Under the direction of Viktoriya Khokhlova, the Glee Club led the singing and Brother Robert Lahey, S.M. played the organ. After Mass, the pilgrims walked to the Brooklyn promenade, where they took in the spectacular view of the Manhattan skyline and the Statue of Liberty.

Below, the Rosary Ministry Society of St. Helen’s parish, Howard Beach, sponsored an Advent pilgrimage to St. Joseph’s Co-Cathedral, Prospect Heights. The group was welcomed by the rector, Msgr. Kieran Harrington, who spoke of the co-cathedral’s history.  Msgr. Harrington also pointed out and explained the liturgical symbols in the church, the many faces of Mary on the rondels, the saints on the new mural and the scenes depicted in the stained-glass windows. Father Joseph Zwosta, the Rosarian moderator, who accompanied the group, celebrated Mass to complete the group’s observation of the first week of Advent. 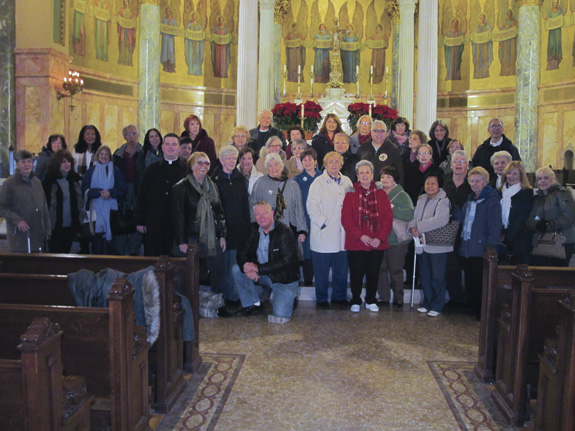