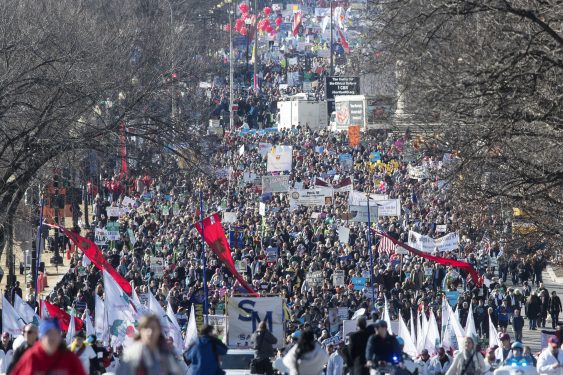 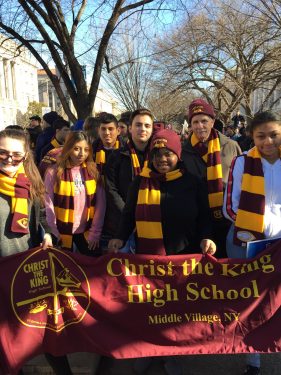 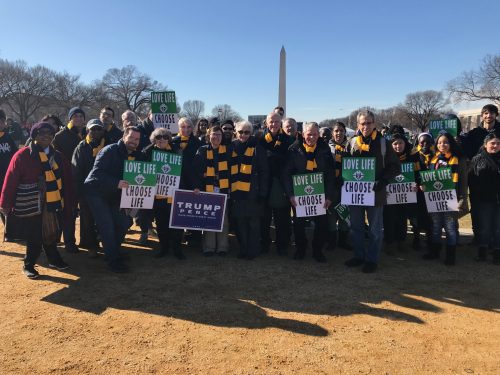 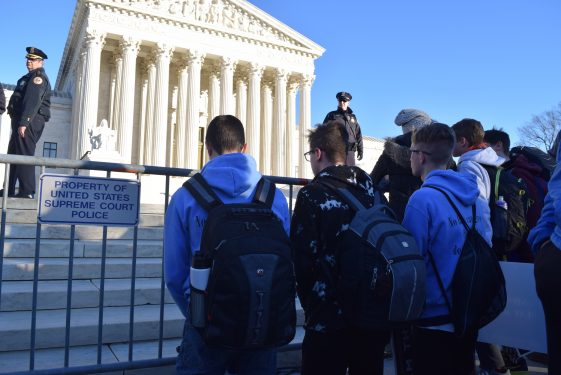 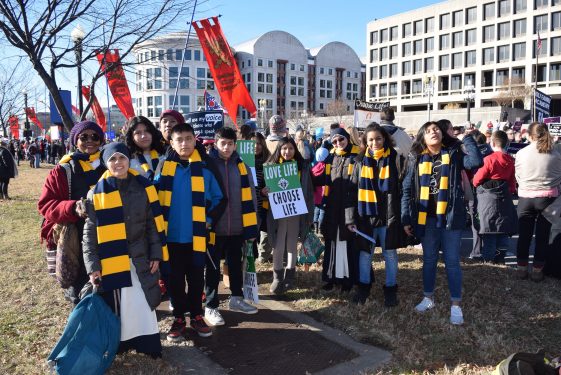 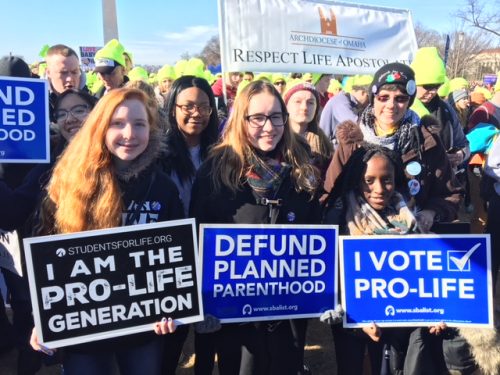 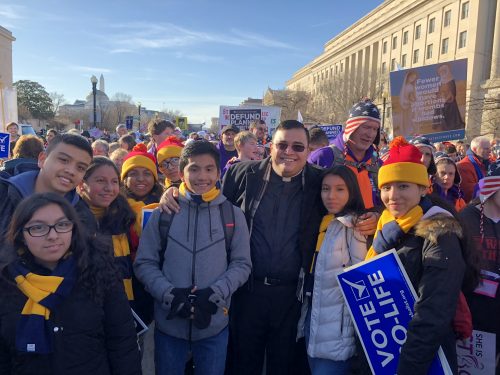 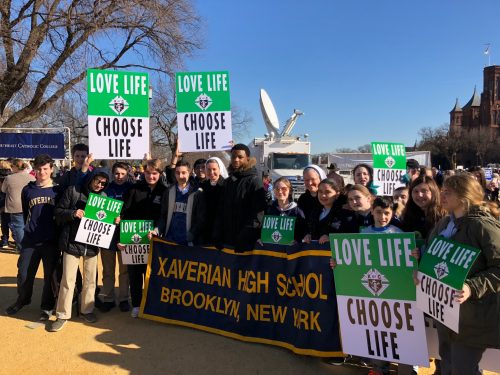 WASHINGTON, D.C. – Speaking to tens of thousands of predominantly young people gathered in the nation’s capital on Friday, Jan. 19, U.S. President Donald Trump pledged that “we will always defend the very first right … to human life.”

While Presidents Ronald Reagan and George W. Bush addressed the rally via telephone, in 1987 and 2008 respectively, this marked the first time a U.S. president appeared live on camera.

Trump praised the “big hearts” and “tireless devotion” of pro-life activists in fighting against what he described as some of “the most permissive abortion laws in the world.”

Related: For Local Parishioners, March for Life Is a Ritual

He was introduced by Vice President Mike Pence, who hailed Trump as “the most pro-life president in American history.” Pence also made a historic appearance at last year’s March for Life, marking the first time a vice president appeared at the rally.

Trump described the event as “one beautiful cause” and “a movement born out of love,” a nod to the march’s official theme of “Love Saves Lives.” 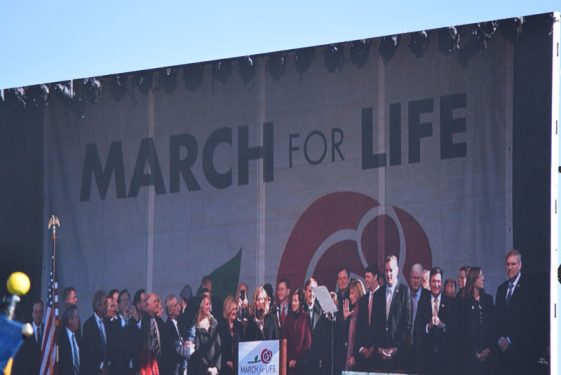 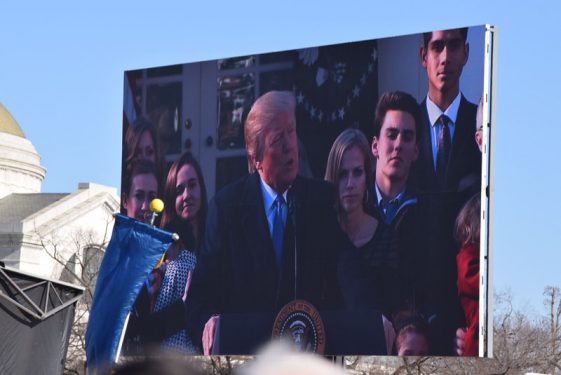 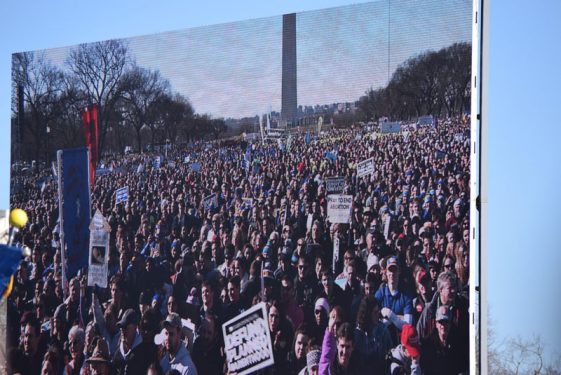 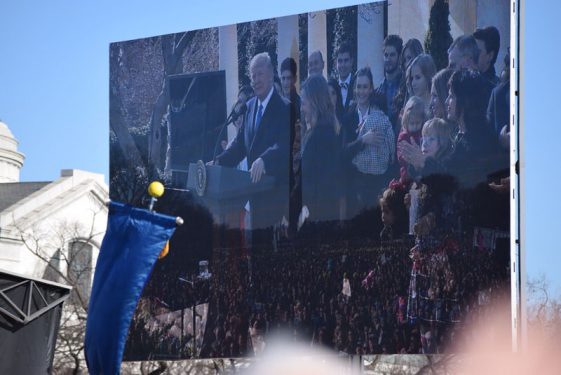 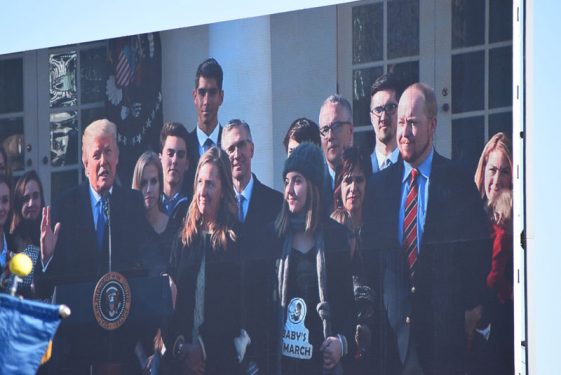 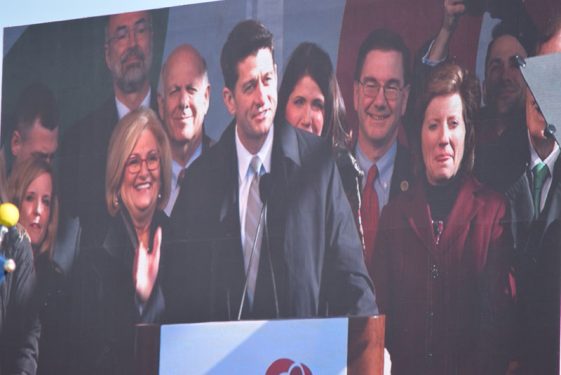 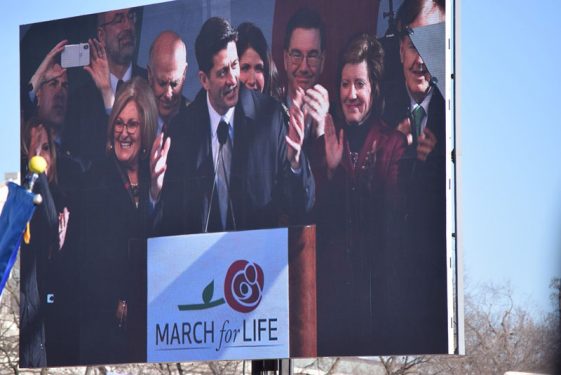 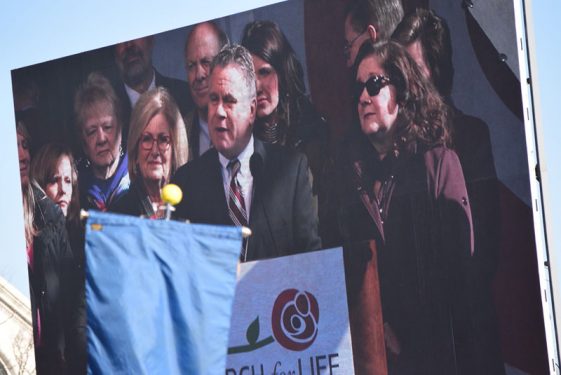 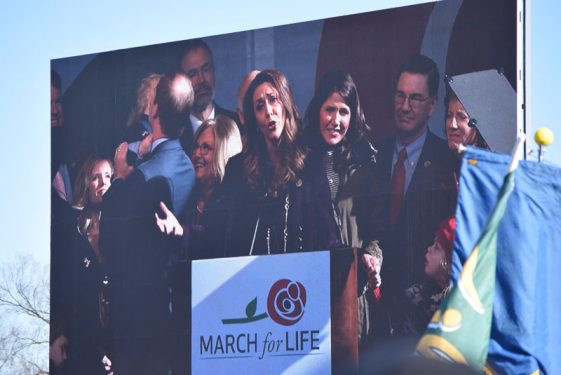 The president hailed various pro-life initiatives of his administration, including the reinstatement of the Mexico City Policy, which bans federal funding for countries that support abortion, along with new conscience protections for healthcare workers. He also used the occasion to tout his administration’s economic accomplishments, giving specific attention to shrinking national unemployment rates.

Trump’s remarks were followed by an address from Speaker of the House Paul Ryan, who gathered on stage at the National Mall with nearly 50 members of the United States Congress. March for Life president Jeanne Mancini welcomed the bipartisan mix of senators and representatives as “the most pro-life Congress in a generation.”

“Can we just thank God for giving us a pro-life president back in the White House?” Ryan asked the crowd at the beginning of his remarks.

“The pro-life movement is on the rise,” Ryan announced to raucous applause, attributing recent pro-life gains to truth and science.

Ryan commended pro-life activists for their work in bringing “healing and acceptance” to post-abortive women, as well as the courage of single mothers and crisis pregnancy centers.

“We strive to make our time in Congress a March for Life itself,” he said, as he listed a number of recent Republican-led pro-life initiatives, including legislation to defund Planned Parenthood and the Pain-Capable Unborn Child Protection Act, which would ban abortions after 20 weeks.

While the march is often known for widespread turnout despite frigid January temperatures, this year’s marchers were greeted with 45-degree-Fahrenheit temperatures, which proved to be a common topic of conversation – and delight – among those moving along the 1.5 miles from the National Mall to the steps of the Supreme Court.

Annie Roufs, an 18-year-old first-time attendee who traveled to Washington for more than 30 hours by bus with a group from the University of Mary in North Dakota, explained she decided to attend out of both intrigue and a sense of obligation.

Pro-life issues have “become the norm in our society,” said Roufs, “and it’s important to me that we end the thought process that life in the womb isn’t life.”

The appearance by Trump, however, was the cause of some concern for pro-lifers present who argued that his policies on the environment and immigration fail to represent a consistent pro-life ethic.

“I’m baffled by the choice” to have Trump speak, said Father Jacek Orzechowski, parochial vicar for the past 10 years at St. Camillus parish in Silver Spring, Md. Orzechowski gathered on the mall with 20 fellow friars, postulants, and members of his parish, and held a large banner saying “Choose Life! Support a Consistent Ethic of Life.”

“To be truly pro-life, one has to be pro-justice, and against racism, against the destruction of the earth’s ecosystem, against this scapegoating of immigrants,” Orzechowski said. “In addition to speaking against abortion, we also speak about the travesty of tearing apart immigrant families.”

“Integrity matters,” he added. “I’m not willing to sacrifice the integrity of the gospel of life at the altar of partisan politics.”