Among the numerous New York City memorials designed to pay tribute to those killed in action, the most cherished ones for many in Windsor Terrace include the bronze plaques at the base of the trees surrounding Holy Name of Jesus Church. These plaques were first installed in 1919 and honor by name local servicemen who died in the First World War.

As a committee reviewed ideas for statues and monuments shortly after the war ended, then-Parks Commissioner John N. Harriman suggested that planting trees would be one of the most lasting and fitting tributes for Brooklyn’s fallen heroes. For $8, a tree would be planted and a nameplate affixed with a serviceman’s name, rank and military unit.

The idea was readily accepted, but the city had no budget for the expense. The costs would have to be paid by individual contributors.

Commissioner Harriman spearheaded the effort, making provisions to assist those who couldn’t afford the cost, and when necessary, to dedicate trees that had already been planted. The response was so great that these living memorials were ultimately planted along Bedford Avenue, Eastern Parkway, and in multiple neighborhoods in the borough.

In its coverage of the May 11, 1919 dedication ceremony, The Brooklyn Daily Eagle noted that more than 4,000 Gold Star family members of Brooklyn’s fallen were in attendance. The song “Trees,” which is based on the poem by Sargent Joyce Kilmer, was so well received by the crowd that it was sung twice. (Sgt. Kilmer, a member of the Fighting 69th, was killed during the Second Battle of the Marne on July 30, 1918.)

It was reported that families and friends would gather each year on Armistice (Veterans) Day to place flags and flowers at the memorial for their own serviceman.

This year, Holy Name parishioners, including many veterans of more recent wars and conflicts, took the time to remove, clean and reinstall the plaques in preparation for the 100th anniversary of the end of World War I. Descendants of some of the Windsor Terrace soldiers gathered with parishioners at Holy Name of Jesus for a special Mass to honor all those who had given their lives in defense of the nation and its freedoms.

A vase filled with American flags and red poppies – one for each of the fallen service members whose plaques surround the Church – stood before the altar. Both the “Star Bangled Banner” and “Trees” were sung, echoing the music of the 1919 dedication. 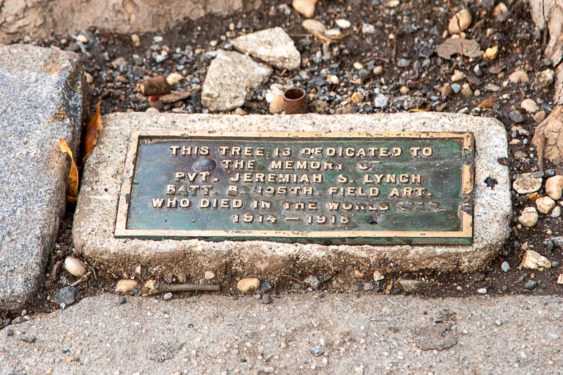 In his homily, Father Larry Ryan, the pastor of Holy Name, also kept alive the deeds of these individuals as he spoke about some of those who were from the parish and the neighborhood.

Men, like best friends Emil Bartel and William Pritchard, who went to Bushwick High School together, joined the Army before the war, served together in the same unit in France, and died just weeks apart. The circle at Prospect Park West and Prospect Park Southwest is named Bartel Pritchard Square in their memory.

Men, like Sgt. William Francis, who first served on the Mexican border. He was promoted to corporal and then sargeant before being sent to France. After his death, his family received a letter of commendation from Father Francis Duffy of the Fighting 69th.

Men, like Wagoner Joseph H. Purcell, one of many who died during the war as a result of the 1918 Influenza Pandemic. Joseph, who died the day the war ended, was in the same base hospital as his wounded brother, James.

Men, like Corporal Herman Morreale, the son of Sicilian immigrants and a graduate of Holy Name Grammar School, who joined the Army but was discharged when he was found to be underage. He enlisted a second time.

Men, like Private Jeremiah Lynch who, along with four of his sisters, emigrated from Ireland under the sponsorship of another sister and her husband. “Uncle Jerry” was so happy to be in this country that he joined the Army, knowing he’d be promised American citizenship. He never returned from France.

Men, like Private Roderick Molloy, another Holy Name alumnus, who worked as a junior pressman at The New York World prior to enlisting. Private Molloy died on Sept. 3, 1918, just five-and-a-half weeks before the war ended. Initially buried in the U.S. Cemetery in France, he was brought home in 1920 and interred in St. John’s Cemetery, Middle Village.

At the end of Mass, parishioners read aloud the names, ranks and addresses of 100 service members from the community who perished in the First World War. A lone piper then led the congregants through the streets around the church.

As an American flag and a single red poppy was placed at each tree, Father Ryan blessed the plaques.