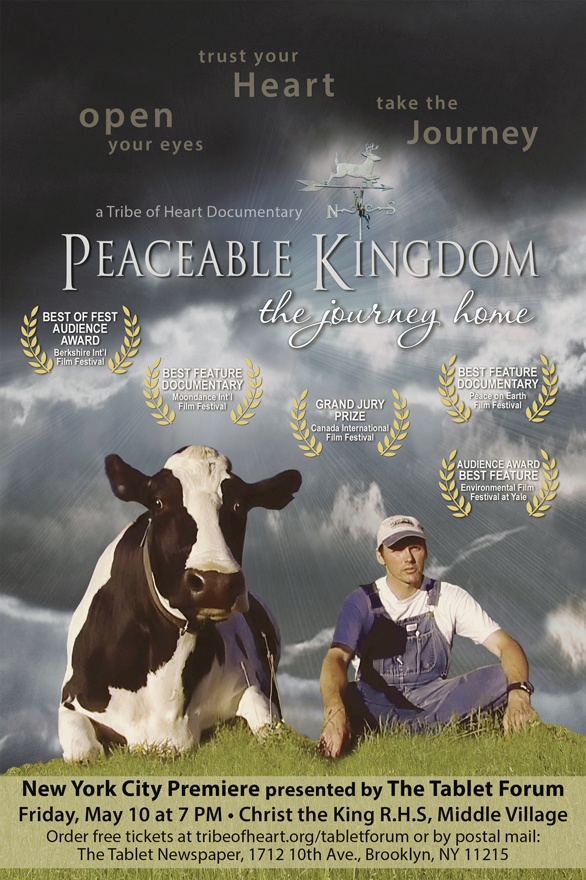 On May 10, The Tablet Forum will present the New York City premiere of “Peaceable Kingdom: The Journey Home,” a documentary I made with my producing partner, Jenny Stein.

The film shares the stories of several animal farmers struggling with profound moral dilemmas. As they sort through past experiences, identifying moments when they succumbed to external pressures at the expense of their sense of right and wrong, the farmers find themselves re-examining their beliefs about animals and what society’s ethical obligations to them should be. Along with the farmers’ personal stories, viewers will be offered a rare glimpse into the lives of farm animals. They will see their individuality; their capacity to suffer and experience joy; and their ability to have profound connections with family members, their fellow animals and even to humans when given the chance.

In working with The Tablet’s Father Frank Mann to put this event together, Jenny and I visited Christ the King R.H.S.’s 1,400-seat Hugh P. Kirwin Performing Arts Center in Middle Village. When the class bell rang, the halls became filled with cheerful young people. From watching them and from interacting with staff members, I got the impression that this school was a place where people were respected and felt safe. After we wrapped up our visit and were driving home, I realized that I was reconnecting with a long-forgotten feeling.

A little less than 40 years ago, I was a fourth grader at St. Ann School in the small town of Cadillac, Mich. My teacher, Sister Mary Therese, was nearing the end of her career. Thin and with sharp blue eyes, she was outwardly stern, but her rare smiles would light up the room. She was, I think, the first teacher who saw my potential and believed in me. She told my parents that she called me “the little old man” because I was so serious. This was the time in my life when I was beginning to awaken to the reality of injustice. Parables, such as the story of the Good Samaritan, struck a deep chord inside of me, as did the way Sister Mary Therese stood up for the best part of her students, calling forth our potential to do right and be of service, especially to those considered least in the eyes of society.

A year later, my family moved to upstate New York, and I found myself in public school. The other students took pity on me, as I did not know how to curse, and wore my shirts buttoned right to the top. I paid them back for their friendly acceptance by helping them with their homework. In turn, they taught me to loosen up and laugh at myself.

During my college years, while traveling in India, I witnessed a man being beaten by three others on a train. Despite being terrified, I attempted to intervene. Upon graduation, I took a job as a counselor to inmates in the county jail. I saw how those with wealth and connections routinely received lighter consequences. Those who were poor and marginalized, guilty or not, routinely spent months incarcerated before their hearings because they could not afford bail. I also learned that most of the men in the jail had substance abuse problems and that the majority had endured some form of deprivation or maltreatment in childhood. This challenged my prejudices and made me aware that the crimes being committed by the men in the jail stemmed, in part, from our society’s failure to protect innocent children from harm.

A few years later, I met Jenny, whose alternative schooling instilled in her a strong commitment to working for social change. When our paths crossed, she was at UCLA’s film school, and I was working on my first novel. Both ambitious, we formed a partnership to pursue our dream of writing and producing movies together. But despite many promising developments, our Hollywood film career never quite took off. We eventually realized that our lives were not going to make sense until we devoted ourselves to what we cared most about in our hearts: helping the vulnerable of this world, those who are being harmed and exploited. By chance, we viewed a documentary about the arbitrary nature of human society’s treatment of animals – how people in one culture might consider a certain species worthy of care and protection, while in another culture, that same animal is treated as a commodity to be exploited, killed and consumed. There was a profound message in this film for us. We intuitively felt that we had discovered our greater purpose.

In 2000, we founded our charitable organization, Tribe of Heart, focused on documenting and sharing inspiring stories about the evolving human conscience. Our first film, “The Witness,” featured a Brooklyn construction contractor, Eddie Lama, who underwent a remarkable transformation from despising animals to becoming their impassioned advocate.

Our current film, “Peaceable Kingdom: The Journey Home,” explores the awakening conscience of several individuals involved in animal agriculture, including Harold Brown, a former beef farmer from Michigan who will be joining us at the premiere. As shown in the film, Harold’s unexpected friendship with a cow named Snickers at an animal sanctuary launched him on a journey of reconnection and self-forgiveness that completely changed the course of his life. Harold’s story of coming home to his true self is an example of the beauty that can come into our lives when we find a way to listen to the voice of our conscience.

Jenny and I are moved by Father Mann’s deep compassion for others, which inspired him to expand his moral vision to embrace any sentient being with the potential to feel both pain and happiness. The love of justice is a gift, one that finds its meaning as we pass it back and forth between each other. One of the first people to give me this gift was an elderly nun who had devoted decades of her life to serving others. I am honored to pass on her gift through sharing this film and am especially grateful to The Tablet Forum for hosting its New York premiere.

Along with Father Mann and the staff of The Tablet, Jenny, Harold and I invite you to join us on May 10, 7 p.m. at Christ the King R.H.S. We look forward to this opportunity to share our film with you, and in turn, to benefit from your wisdom and life experience as we join together in a community discussion, followed by refreshments and more informal dialogue.[hr] Tickets to The Tablet Forum on May 10 can be obtained by e-mailing ewilkinson@diobrook.org or by sending a request to The Tablet Forum, 1712 Tenth Ave., Brooklyn, NY 11215.