The Mariel, the newspaper of The Mary Louis Academy, Jamaica Estates, won the General Excellence award at The Tablet’s High School Press Awards.

It ended a six-year winning streak by The Stanner, newspaper of Archbishop Molloy H.S., which placed second.

Alicia Badea, editor-in-chief of The Mariel, said winning 14 awards, including seven individual first places, means a lot to her staff.

“To know that the work that we have done and the effort we put in has been recognized here is one of the best feelings,” she said.

Every year, The Tablet invites all Catholic high school newspapers in the diocese to participate in a friendly competition. The editorial staff reads all submissions and chooses winners based on the quality of the work and how it serves the student body.

The Mariel was one of eight school newspapers that participated in the competition. This year, all participating schools earned at least one award. The ceremony was a chance to honor the work of the young journalists as they strive to promote the values of truth and justice through student journalism.

After the ceremony at the Diocesan Chancery, Park Slope, the student journalists had the opportunity to network, read the winning entries and compare notes during a luncheon. This year, professionals from DeSales Media, the parent company of The Tablet, were available to talk to students about journalism, TV production and marketing. 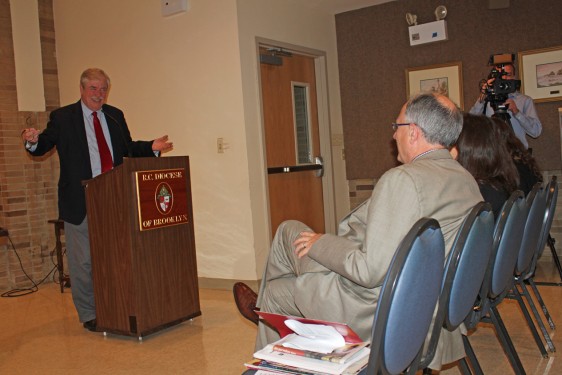 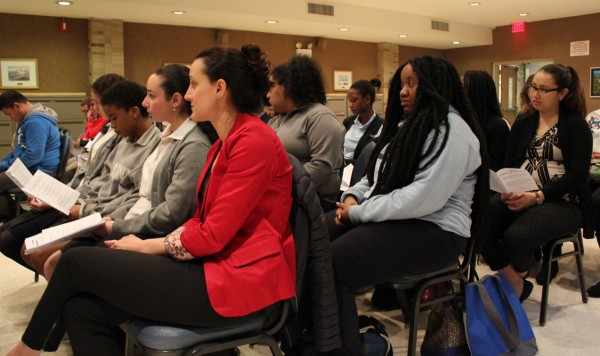 The day started with a prayer to St. Francis de Sales, patron of journalists.

Keynote speaker Peter Feuerherd talks to the young journalists about what makes a good reporter. 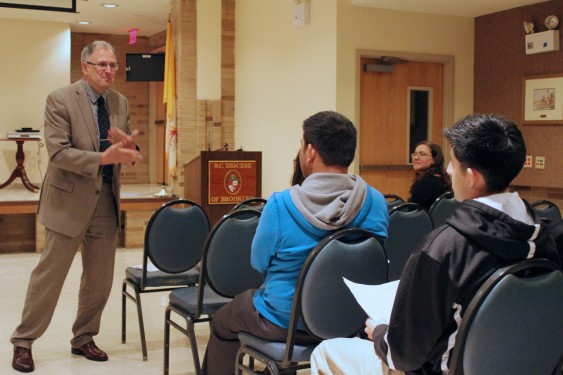 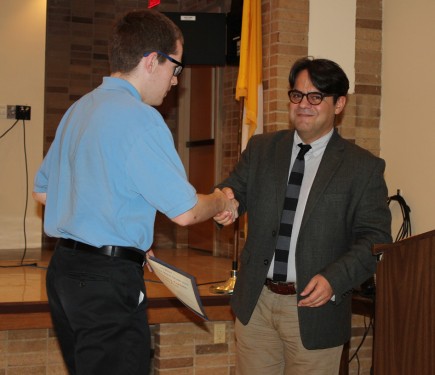 A journalist from The Current at Cathedral Preparatory and Seminary shakes hands with Jorge Dominguez, editor-in-chief for Nuestra Voz, the diocesan Spanish-language monthly newspaper. (Other award photos will follow) 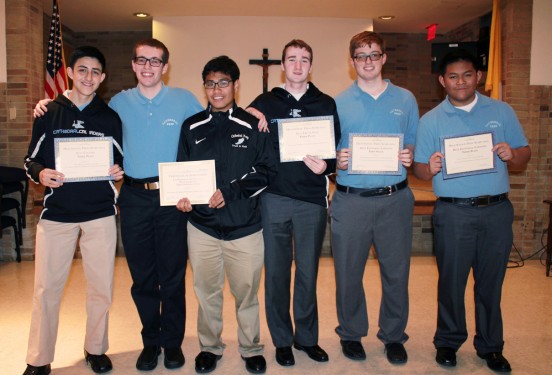 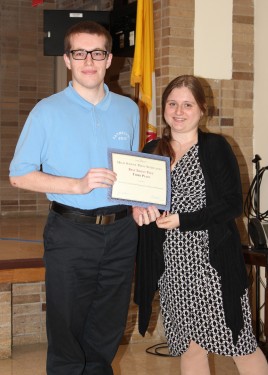 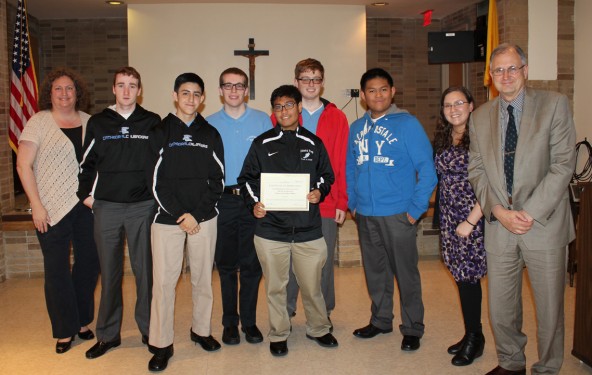 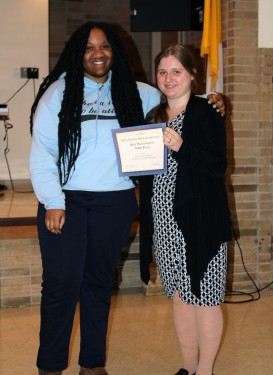 Journalists from The Parmentier, the newspaper at St. Joseph H.S., receive their awards. 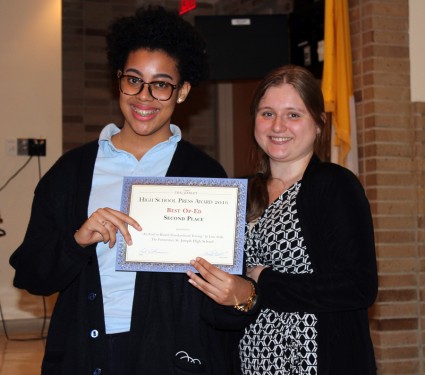 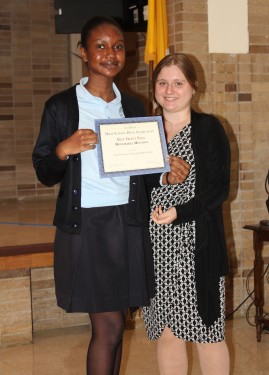 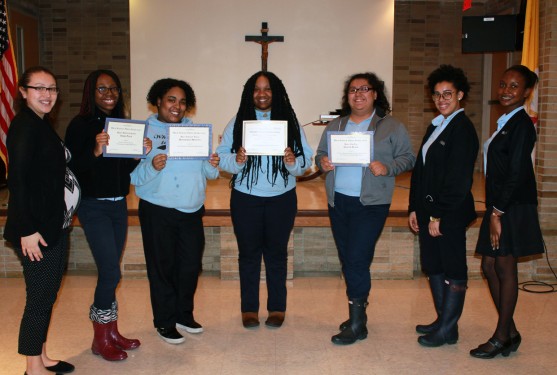 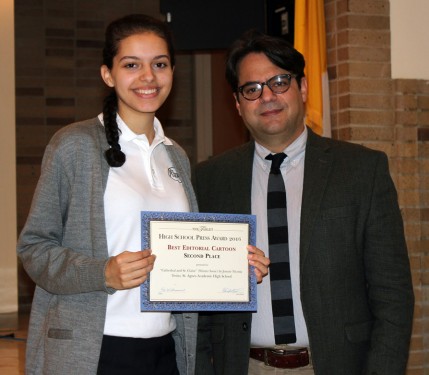 Journalists from Veritas, the newspaper at St. Agnes A.H.S., receive their awards. 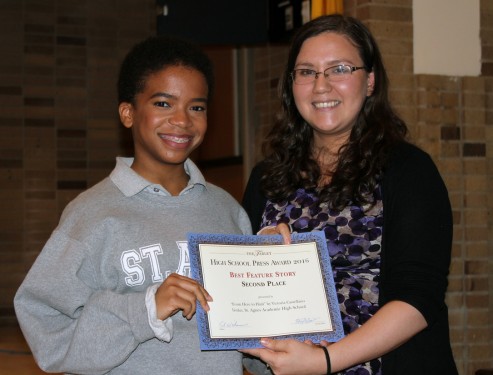 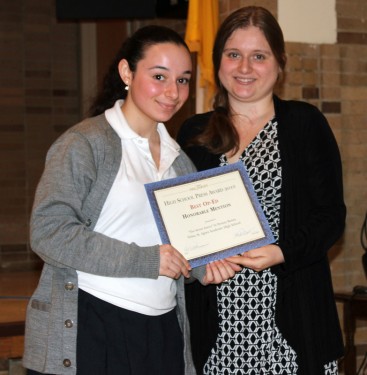 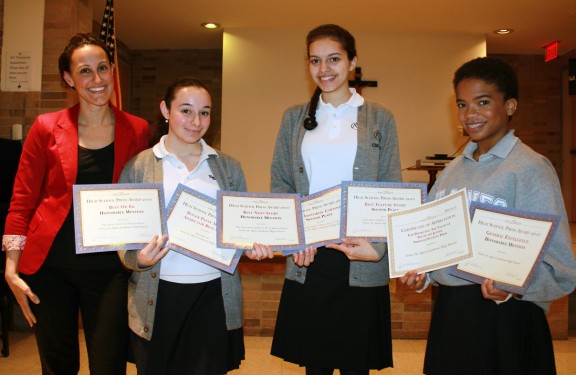 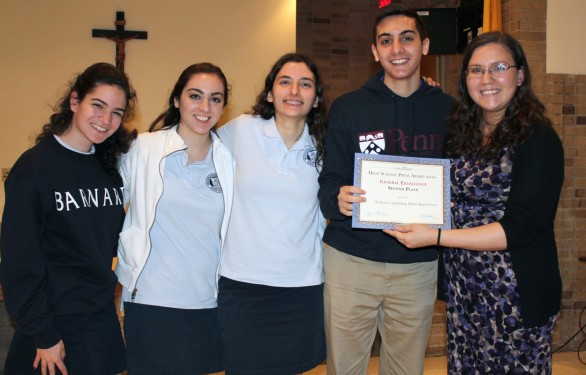 Journalists from The Stanner, the newspaper at Archbishop Molloy H.S., receive their awards. 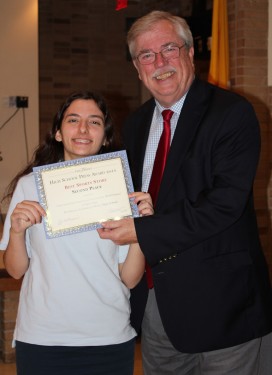 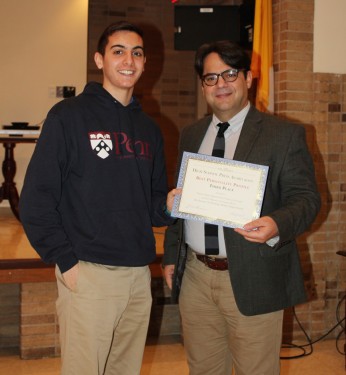 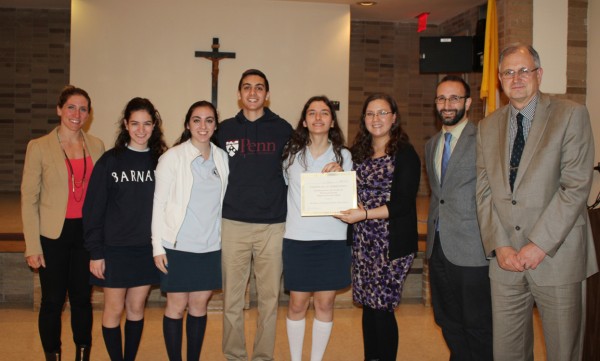 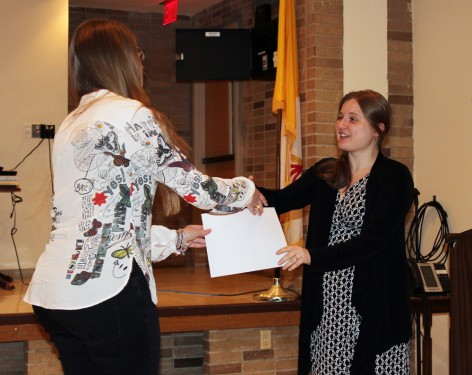 Editor from The Mariel, the newspaper at The Mary Louis Academy, receives awards on behalf of her staff. 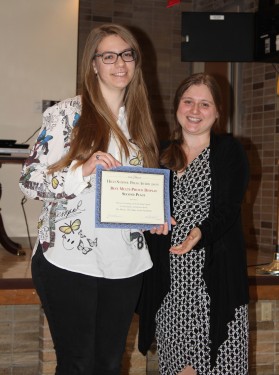 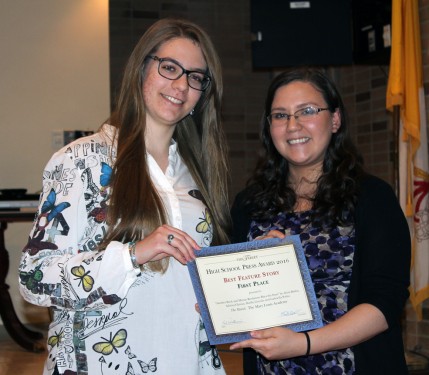 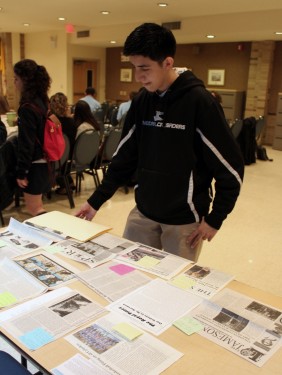 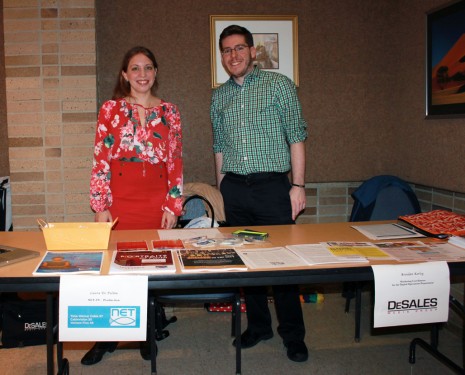 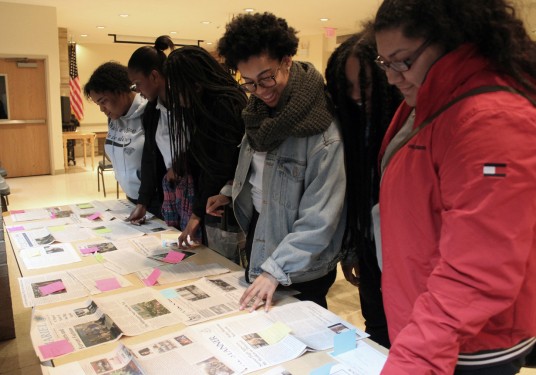 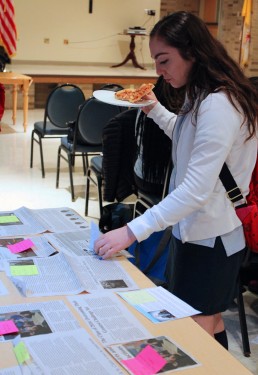 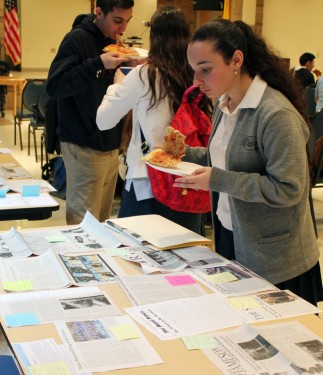 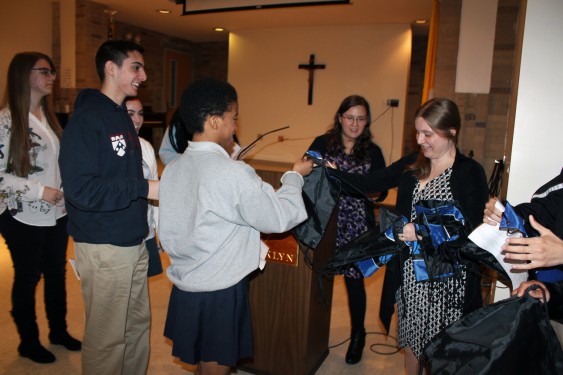 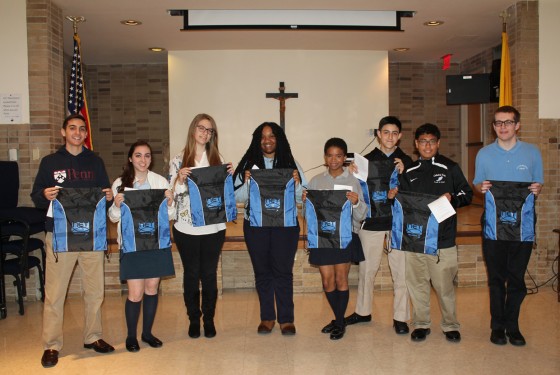 The school newspapers all take a different approach to their mission. Some focus on hard news, while others rely more heavily on features and entertainment. However, all schools have student staffs, which include reporters, photographers, editors and graphic designers.

Senior Nicholas Telesco, from Cathedral Prep’s The Current, said that they always like to come to the press awards and see what other schools are doing.

“We like it because we get to see other school journalists and compare ourselves to the competition – to see what we can do to improve,” he said.

Before the awards presentation, the students heard from journalist Peter Feuerherd, who was the keynote speaker at the ceremony.

A journalism professor at St. John’s University and a writer for National Catholic Reporter’s “The Field Hospital” online section, Feuerherd has worked on Catholic newspapers in Indianapolis, Cincinnati, Albany, Detroit, New York City and Long Island. He has won numerous awards, including a Religion Communicators Council Award for a story on New York after the terrorist attacks of 9/11. He currently writes about how parishes are responding Pope Francis’ call to reach out to the poor.

During his presentation, Feuerherd spoke about the importance of recording what is happening around the world and that today’s journalists need to become experts on a topic in addition to honing basic journalistic skills.

Everyone reporting from a scene can be a journalist, he added, but having a focus to provide analysis is still important.

Feuerherd shared anecdotes from his niche, religion reporting, which has increasingly gain prominence in media, in part thanks to Pope Francis speaking from his experiences as a priest working with the poorest of the poor.

He added that as journalists, the students should make sure to tell the stories of those who have no voice, those who might be at the other side of the wall.

Speaking about the parable of the prodigal son, Feuerherd said that journalist need to report on stories from the viewpoint of both sons – “the older son doing what was supposed to do and the guy living with the pigs.”

He added that sometimes stories that need to be told can “pop at you” and some other times the stories that are underreported are being told around dinner tables.

Feuerherd also encouraged students to see how their own story relates to the bigger stories in society, to check them out and write about them.

Students said they were glad that the speaker mentioned the need to investigate all sides to get a good picture about what the story is.

“I liked when he asked us who do you think is a journalist to realize that everybody has something to offer and that we all have a seat at the table,” said Shafrarisi Bonner, a junior writing for The Parmentier at St. Joseph H.S. in Downtown Brooklyn.

Bonner said that she likes to work on opinion pieces while working at her school’s newspaper, to voice what the school cares about. She notices that those pieces have an impact in the school community.

Other students agreed with Feuerherd in that pursuing a story that they are passionate – even if he does not seem like big news – is necessary because of the impact it can have on the readers.

“We are promoting truth and getting people stories out there,” Badea said. “We can start tough conversations and talk about what affects people’s lives.”