DUBLIN (CNS) – Commemorations of the sinking of the Titanic 100 years ago will put the spotlight on a young Irish priest whose photographs are some of the only surviving images of life onboard the liner on its first and last voyage.
Jesuit Father Frank Browne, 1880-1960, became a prominent documentary photographer and a much-decorated chaplain in the British army in World War I.
A collection of his photographs, “Father Browne’s Titanic Album” has been reprinted to mark the centenary of the demise of the massive liner, which was constructed in Belfast, Ireland, and was believed to be unsinkable.
More than 1,500 people died when it sank April 15, 1912.
The new edition of the book is edited by Jesuit Father Edward O’Donnell, and the foreword is written by Robert Ballard, who first located the ship’s wreckage in September 1985, the same month as a chance finding of 42,000 of Father Browne’s photographs in the basement of the Jesuits’ headquarters in Dublin.
Frank Browne lived an eventful life. As a novice he met Pope Pius X in 1909 when he accompanied his uncle, Bishop Robert Browne of Cloyne, to a private audience at the Vatican. He was also a university classmate of Irish writer James Joyce, who featured the young seminarian as “Mr. Browne the Jesuit” in his masterpiece “Finnegans Wake.”
In 1912, the Jesuit novice was still three years from ordination. Because of a gift from his uncle, he was able to experience the Titanic’s luxurious accommodation in the initial stages of its maiden voyage, from Southampton, England, to Cherbourg, France, and on to Queenstown, Ireland. 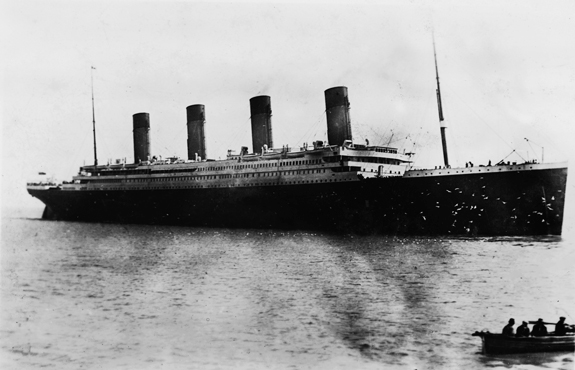 Last Image of Captain
While onboard, the self-taught photographer managed to obtain pictures of the first-class accommodation and dining rooms. He also captured the gymnasium, the library and passengers enjoying a stroll on the promenade, as well as many passengers in third class, recording some of those who would later perish in the freezing waters of the Atlantic. He took the last image of the Titanic’s captain, Edward Smith.
Father Browne’s images of the ship’s accommodation and passengers have been pored over by maritime historians, engineers and filmmakers seeking answers to a tragedy that still grips the public’s imagination. Hollywood film director James Cameron used his photographs to re-create sets for his blockbuster movie.
The Jesuit’s image of six-year-old Robert Douglas Spedden playing with his spinning top on the promenade, watched by his father Frederic, is one of the most famous of the collection. Cameron re-created the image in the film.
The young Jesuit photographed the Titanic leaving port for the last time as it left Queenstown, in County Cork, for New York. He could have been onboard: An American couple he befriended on the ship offered to fund the final leg of the journey to New York.
From the Titanic, he sent a telegram to his provincial in Dublin to request permission. However, a frosty telegram awaited him in Queenstown: “Get off that ship.”
When news of the Titanic’s disastrous fate reached Father Browne, he folded the telegram and put it into his wallet and kept it there for the rest of his life. He later said it was the only time holy obedience had saved a life.
[hr]
Editor’s Note: “Father Browne’s Titanic Album,” edited by E.E. O’Donnell (2nd edition 2011), is published by Messenger Publications, www.messenger.ie.