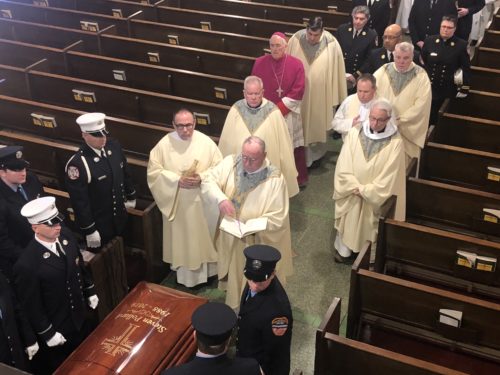 “We are here as witnesses to our faith and we know that Steven has found eternal life.”

Despite temperatures in the 20s and a blustery wind, thousands of uniformed firefighters and first responders lined Avenue S in Marine Park for as far as the eye could see.

Under the bright blue sky, the multitude stood at attention as a fire truck, converted into an open hearse, from Pollard’s Ladder Company 170 in Canarsie slowly transported his casket to the front doors of the church.

A solitary New York City Fire Department Emerald Society Pipes and Drums bagpiper then played “Amazing Grace” as the casket was solemnly lowered and brought into the church.

The 30-year-old Pollard died in a fall from the Mill Basin Bridge Jan. 6 as Ladder Company 170 responded to a car crash on the Belt Parkway. He had been a firefighter for a year and a half.

Inside the church, every pew was filled with family, friends, dignitaries and fellow firefighters. A screen and loudspeakers outside allowed those who could not fit inside to watch and hear the Mass. A room was also set up with a video feed of the Mass inside Good Shepherd Catholic Academy, next to the church, as another viewing space.

“Jesus was with him and next to him. Jesus brought Steven home,” Msgr. Delendick, who is also pastor at the Shrine Church of St. Jude in Canarsie, added as he offered solace to the worshippers.

Pollard grew up in Good Shepherd parish and it was where he received all of his sacraments.

Before the funeral began, Father Doyle said that the entire parish would support the Pollard family in prayer and whatever else they needed.

“We want them to know we’re with them through the whole process,” he said, “not just today.” 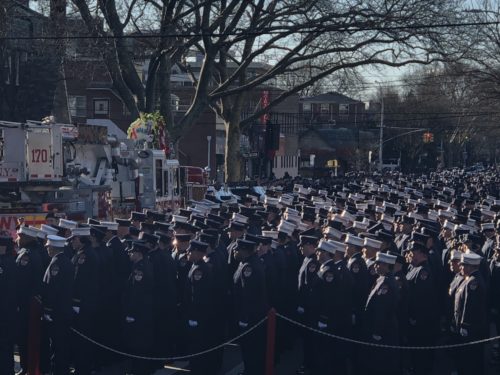 Praying With and For the Family

Cathy Sullivan, a Good Shepherd parishioner and Pollard family friend, was emotional as she arrived for the Mass.

“We are here to pray as a community, to show how important faith is to the family,” she said. “We believe he’s in paradise and is now an angel for all of us.”

Near the end of the Mass, New York City Mayor Bill de Blasio delivered one of four eulogies and offered the city’s condolences to the Pollard family.

“When I look at this good family, I’m reminded what it takes for people to make that choice to serve. It takes faith, it takes a love for your fellow human, it takes a sense that you’re not alone,” de Blasio said.

Pollard’s father is a retired FDNY firefighter and his brother is currently a firefighter in Sunset Park.

‘Bravery Was in His Blood’

Fire Commissioner Daniel Nigro said Pollard excelled in the academy and was everything that the FDNY wants in a firefighter.“This young man was strong, smart, hard-working, dedicated and above all, he was brave,” said Nigro.

“Bravery was in his blood,” he said.

Pollard’s dedication to his work and helping others was noted by all of the eulogists.

“We lost a true hero that night,” Timothy Klein, a fellow firefighter at Ladder Company 170, said in his remarks. “You will never be forgotten,” he added as thunderous applause filled the church and indoor viewing room.

Inside that room, three students from St. Edmund Preparatory H.S.’s hockey team watched the Mass with their coach. All three wore their purple jerseys in honor of Pollard, who played on the team during his years at the Sheepshead Bay school. He graduated in 2006.

Joseph Fortunato, a senior at the Prep, said being there helped him understand Pollard’s life.

Lived to Save Others

“He lived his life to save others,” Fortunato said. “I learned today how brave he was.”

Pollard is survived by his mother, Janet; father, retired firefighter Raymond Sr., who served for 32 years; and his brother, Raymond Jr., an 11-year veteran.

The Emerald Society’s Pipes and Drums played “America the Beautiful” as Pollard’s body was transported to Green-Wood Cemetery.

Through it all, the thousands in uniform lining the street stood at attention once more in another silent tribute to the 1,151 member of New York’s Bravest to die in the line of duty.

Contributing to this story was Tim Harfmann.