VATICAN CITY (CNS) – A trip to Latin America, a Synod of Bishops on new evangelization, the start of the Year of Faith, creation of new cardinals and proclamations of new saints are all on Pope Benedict XVI’s calendar for 2012.

Of particular interest to the United States, the pope will also continue his meetings with groups of U.S. bishops making their “ad limina” visits to the Vatican during the first half of the year. His talks to the bishops are expected to focus on themes of education, religious freedom and the relationship between culture and religion. 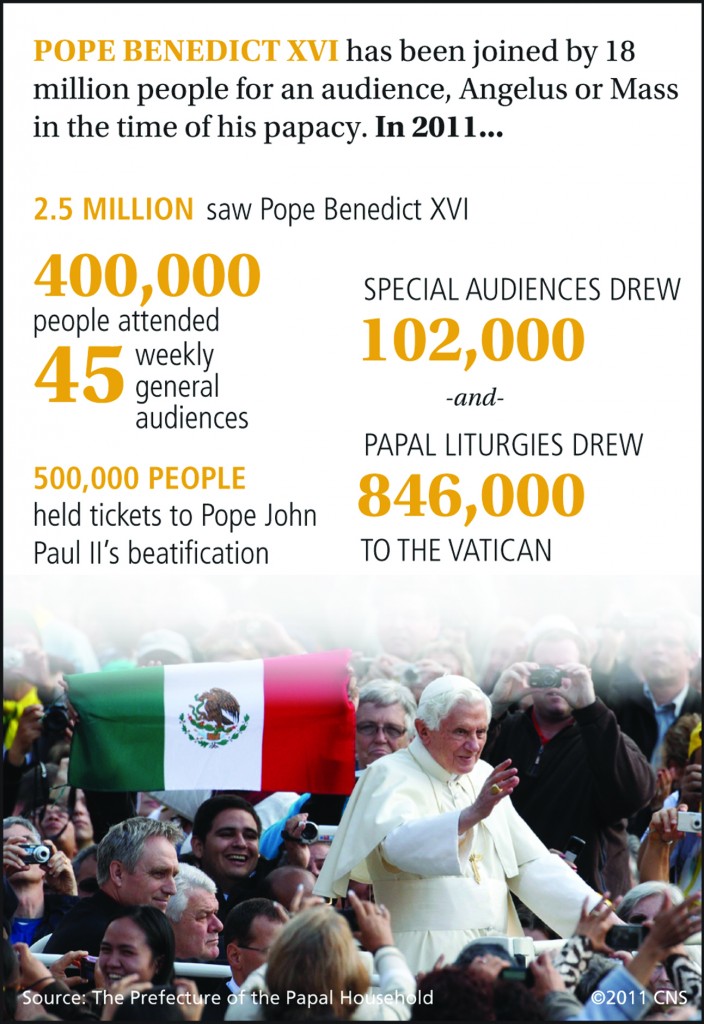 The 2012 highlights are only a small part of the pope’s day-to-day schedule, which includes hundreds of meetings, speeches, messages and liturgies. The German pope, who turns 85 in April, also pursues a “private” agenda of writing whenever he gets the chance, as he works to complete the latest in his “Jesus of Nazareth” series of books – this one on Jesus’ infancy and childhood.

Pope Benedict is virtually certain to call a consistory to create new cardinals in 2012. He may do so as early as February, when there will be at least 13 “vacancies” in the roster of voting-age cardinals (those under the age of 80); or he may wait until fall, when 10 more cardinals will have turned 80.

When he does name new cardinals, the list could include one or more Americans. U.S. prelates in line for the red hat – now or later – include Archbishop Edwin F. O’Brien, pro-grand master of the Equestrian Order of the Holy Sepulcher of Jerusalem; and Archbishop Timothy M. Dolan of New York. From Canada, Archbishop Thomas C. Collins of Toronto is a likely choice.

Pope Benedict plans to travel to Mexico and Cuba in March on a trip that will turn a spotlight once again on Latin America, home to nearly half the world’s Catholics. It will also move the pope onto the radar of U.S. media, which have cut back on their coverage of the pope and the Vatican in recent years.

The pope may also travel to Lebanon, probably in the spring.  An invitation from Lebanese leaders came a month ago, and Vatican officials have said the pope wants to deliver his follow-up document on the Synod of Bishops for the Middle East, held at the Vatican in 2010. Such a visit would give the pope a high-visibility platform to weigh in on religious freedom issues during a period of volatile political change in the region.

The fall of 2012 will bring several important events, including the world Synod of Bishops Oct. 7-28. New evangelization has become the leitmotif of almost everything Pope Benedict does these days, and the gathering of bishops will help translate the term into practical pastoral initiatives. The essential idea is to find ways to energize Catholics, reminding them of their duty to witness the faith publicly and proclaim it to others.

The synod will follow the somewhat streamlined format introduced by Pope Benedict in 2005: a shorter assembly, shorter individual speeches and more free discussion in the synod hall.

The Year of Faith was designed by the pope to help Catholics rediscover the basic content of their faith, and the Vatican’s preparation materials – due out very soon – will have a strong doctrinal element. The special year will begin Oct. 11, 2012, which is the 50th anniversary of the opening of the Second Vatican Council, and some Vatican sources say the pope may publish a document that connects the two events.

Sometime during 2012, the pope is expected to proclaim new saints, including two with special significance to U.S. Catholics: Blessed Marianne Cope of Molokai and Blessed Kateri Tekakwitha. Mother Marianne led a group of sisters from New York to the Hawaiian Islands in 1883 to establish a system of nursing care for leprosy patients; Blessed Kateri, daughter of a Christian Algonquin mother and a Mohawk father in upstate New York, will become the first Native American to be canonized.

The date for these two canonizations has not been set, but many think it may happen on Oct. 21, World Mission Sunday.